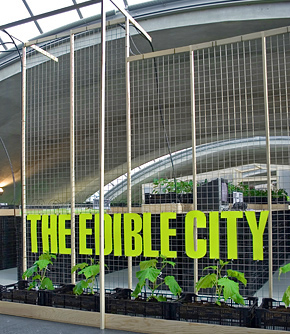 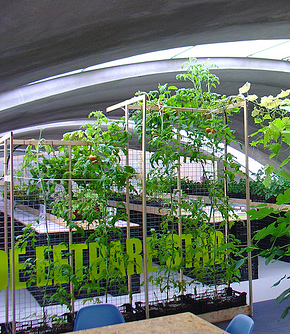 This post is about the sign system we designed for The Edible City, an exhibition that took place at NAi Maastricht in 2007. To see all the other printed matter (posters, brochures) that we created for that same exhibition, go to NAi / The Edible City 1. There you can also read more background information about the NAiM as an institute.

The Edible City / De Eetbare Stad was an exhibition that took place at the NAiM between March 3 and June 22, 2007, guest-curated by Hans Ibelings, Anneke Moors and Debra Solomon. The theme of the exhibition revolved around the relationship between experimental urbanism and alternative food production.
To put it very simply, the exhibition consisted of two main parts: a more 'technocratic' part, curated by Hans Ibelings, focusing on large architectural projects involving the mass-production of food, and a more 'counter-cultural' part, curated by Debra Solomon, focusing on grassroots movements and community-driven forms of small-scale food production.
The architecture of the exhibition was done by Herman Verkerk and Paul Kuipers of EventArchitectuur, who designed a large landscape of wooden stalls, tables and boxes, intercut with arches, pergolas and greenhouses. This landscape was then filled with actual plants, all of which edible (fruit, vegetables, etc.) During the course of the exhibition, these plants grew all over the installation, resulting in a magnificent, almost tropical environment.
We were asked to come up with a way to install the texts and images in this exhibition. For the most part, these texts and images were not just the captions of the show, but the actual content of the show. In other words, the prints we were asked to produce would serve as the actual exhibition pieces. Apart from a few maquettes and models, and of course the plants, the show was pretty much a 'reading exhibition', an exhibition filled with texts to read. 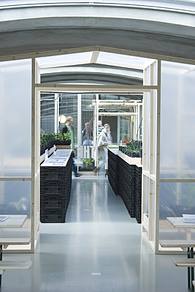 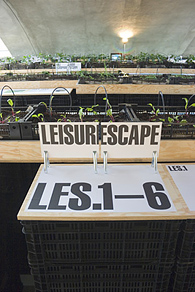 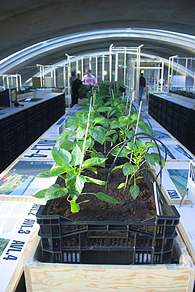 Our main concern was to find a way to attach texts and images to the wooden installations. To be honest, these wooden constructions reminded us a bit of market stalls, especially when you take into consideration the fruit/veg factor. Thinking about market stalls in general (in fact, our studio is situated just around the corner of a market), we decided to use typical 'market stall clamps' as a starting point. (Market stall clamps are metal spring clips that are commonly used for fastening market stalls). We thought these clamps would be perfect for mounting prints to the wooden constructions.
When we actually saw the wooden constructions, we changed our minds, and decided we would go for wheatpasting. In other words, we glued the prints to the wood using wheatpaste (i.e., wallpaper adhesive).
However, we did find a good use for the markets tall clamps after all. We used those clips to hold the titles of each chapter. To put it simply, the text sheets were wheatpasted on the horizontal planks, while the title cards were placed vertically, using the clamps as 'legs'. We liked the way the title cards were standing vertically; they looked like protest placards, or miniature billboards. 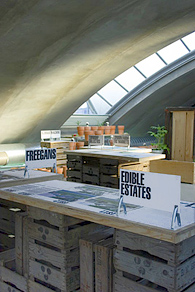 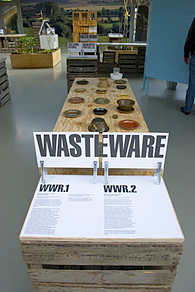 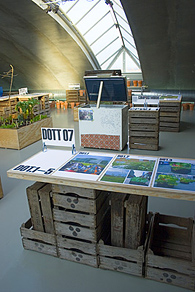 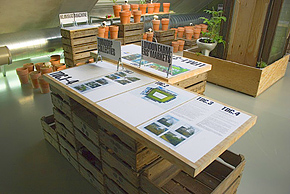 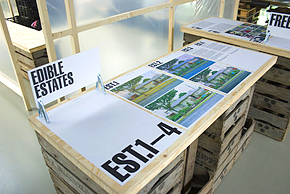 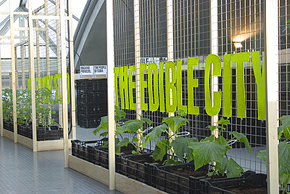 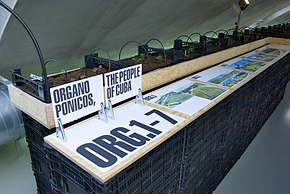 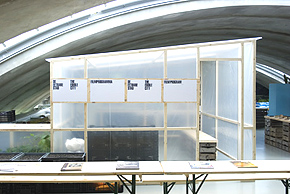 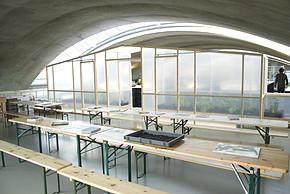 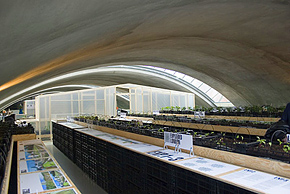 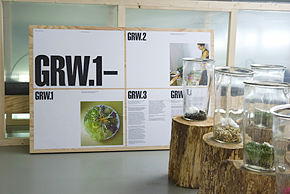 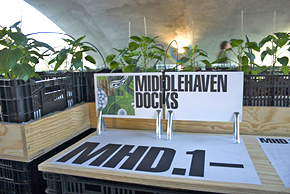 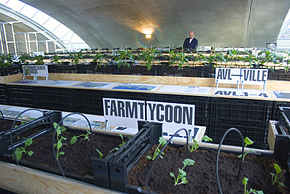 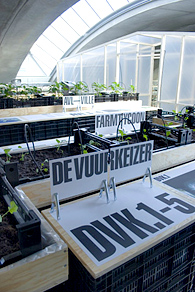 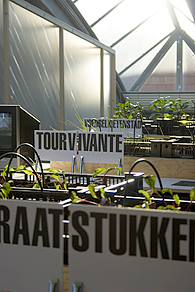 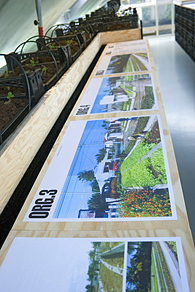 Before you entered the actual exhibition, you first had to go through a pergola, a wooden archway. On the inside of this pergola, we wheatpasted sheets carrying general information about the exhibition (introductory texts, maps, etc.). See: 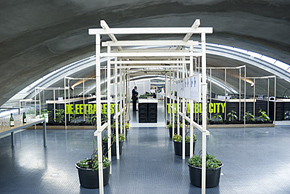 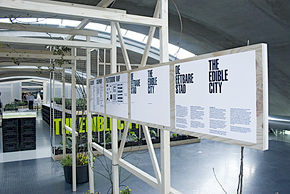 Right after the pergola, we placed the title of the exhibition. We used the fence that was part of the installation, and employing little metal clips, we fastened letters to it, letters we cut-out ourselves from yellow cardboard. On the left side of the entrance we wrote 'De Eetbare Stad', on the right side we wrote 'The Edible City'. 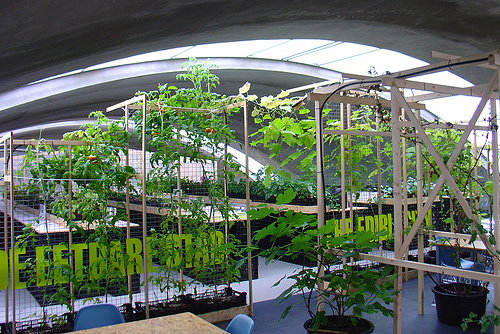 The most interesting part of the exhibition was the fact that the plants were not only edible, but also growing. Comparing photographs made at different times during the exhibition, you can really see the change. Below two photographs, both showing the same spot. First, a picture taken in March 2007. Then, a picture taken a couple of weeks later. (Photographs by Reginne Débatty and Debra Solomon, via Flickr): 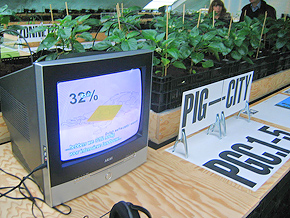 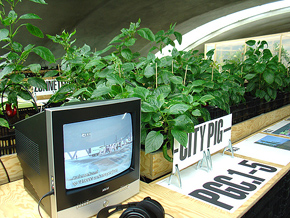 Another example (of the growing plants). A photo made by ourselves, followed by a photo by Debra Solomon: 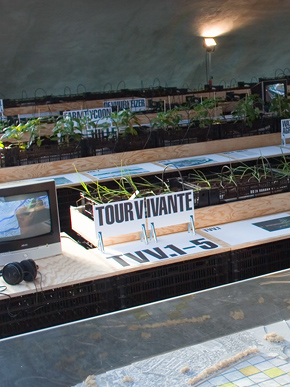 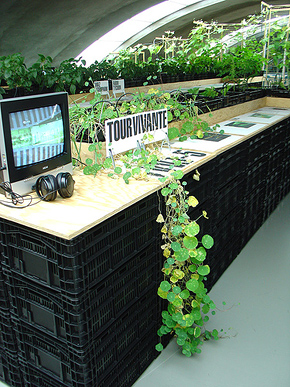 As we already mentioned, the exhibition ran from March 3 to June 22, 2007 (although, if our memory serves us well, the exhibition was actually prolonged, so it might have been on display even longer). All sheets were printed by ourselves (on our trusty Epson Stylus Pro inkjet), and we also did the wheatpasting.