This post is about the printed matter (posters, invitations) we designed for The Edible City, an exhibition that took place at NAi Maastricht. To see the sign system we created for that same exhibition, go to NAi / The Edible City 2.

NAiM is the Maastricht dependance of the Rotterdam-based NAi (Netherlands Architecture Institute). As you probably know, Maastricht is a city in the south of the Netherlands, while Rotterdam is in fact situated in the west of the Netherlands (in Holland, so to speak). The physical distance between these two institutes is quite large, which translates in the fact that these two institutes (NAi and NAiM) function quite independent from each other, program-wise.
Director of NAi Maastricht is Guus (Gustav) Beumer, whom we happen to have worked with since 1998, in different contexts. We have worked with Guus while he was co-director of fashion label So by Alexander van Slobbe, we have worked with him while he was director of art institute Marres, and since 2007 we have worked with him on the graphic identity of NAiM.

The Edible City / De Eetbare Stad was an exhibition that took place at the NAiM between March 3 and June 22, 2007, guest-curated by Hans Ibelings, Anneke Moors and Debra Solomon. The theme of the exhibition revolved around the production of food, and its influence on architecture and urbanism.

Thinking about the given title, The Edible City, we were immediately reminded of the magnificence of 'The Naked City' (1957), Guy Debord's famous 'psychogeographical' collage of Paris: 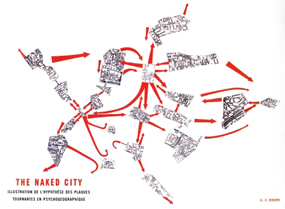 We very much liked the concept of using the technique of collage to give a personal interpretation of the city. The more we thought about it, the more we were convinced we should make a collage of the city of Maastricht, a collage built from food packaging, the sort of waste you can find on the streets of any big city. Sketching along, we arrived at the idea of recreating the map of Maastricht using fragments of candy wrappers. Our plan was to use wrappers featuring names referring to the first letters of Maastricht (M, Ma).
Shown here three posters we designed for The Edible City: an A0-sized poster featuring a Milka Chocolate Bar wrapper, an A2-sized poster featuring an M&M wrapper, and a A3-sized poster featuring a Caramac wrapper. (Folded to an A5 format, the A3 poster was actually the invitation). The posters were printed in CMYK, but some of the CMYK colours were in fact replaced with a fluorescent ink, giving the posters a really Pop-Art-like brightness: 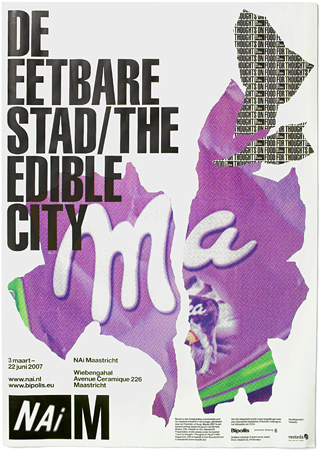 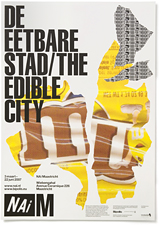 We were also asked to come up with a brochure, so we designed a simple folder, consisting of an A3-sized sheet, printed on one side, and folded to an A5-sized four-page booklet. Shown below: the invitation, folded to A5, and the brochure, folded to A5 as well. 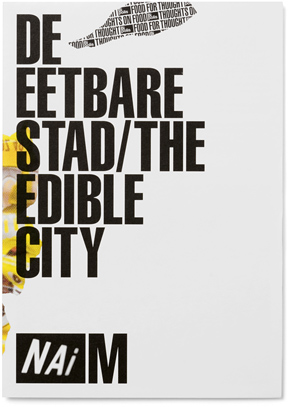 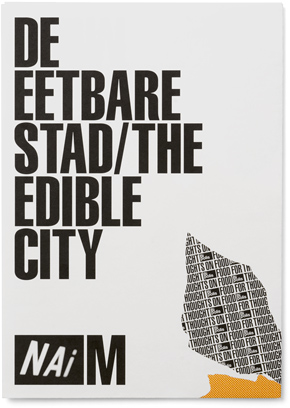 Shown below, the brochure, partly unfolded. The outside cover and inner spread: 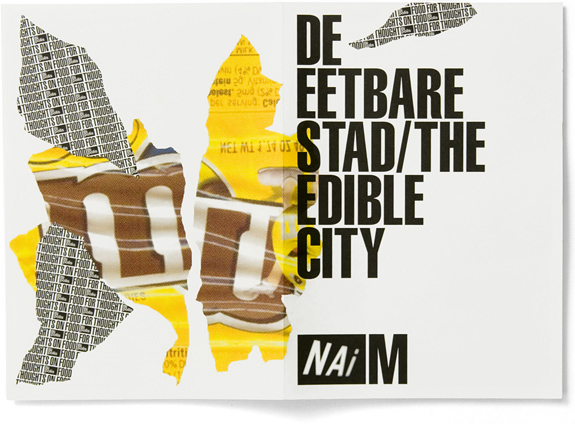 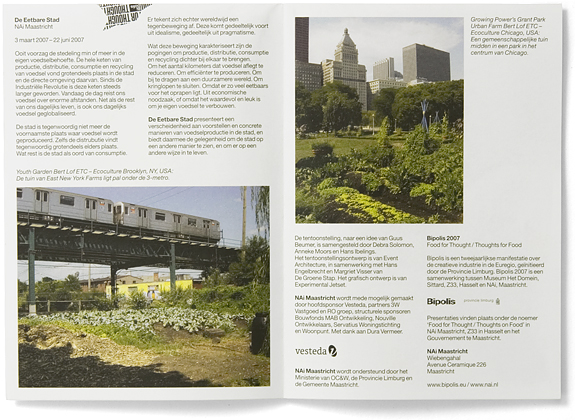 The typeface we used on these posters and brochures (Helvetica Extra Compressed) became an important part of the graphic identity of NaiM, in the sense that we also used it for all later NAiM exhibitions (see NAiM / Jean Prouvé, NAiM / State Alpha and NAiM / Changing Ideals). We never necessarily intended it that way, but it all grew quite organically from this poster, which is always a nice phenomenon: when a graphic identity just develops out of a single piece of printed matter in a completely natural way.

The NAi logotype that we used on all these posters and brochures, in the left bottom corner (the black rectangular box containing the white NAi acronym), was in fact designed by Bruce Mau, in 1993, for NAi Rotterdam. It is actually part of a much larger logo system, containing several variations, which is the way NAi Rotterdam still uses it, to this day. For NAi Maastricht, we decided to use only one variation, always in combination with the Extra Compressed M, neatly gridlocked in the template of the poster.

The Edible City / De Eetbare Stad was part of a larger design event called 'Food for Thought / Thoughts on Food'; for this event, we designed the logo as well. See NAiM / Bipolis.

next: NAiM The Edible City 2