While artist Vanessa Beecroft was having her retrospective exhibition in Korea (see VBRS), she also organized a performance that took place on February 27, 2007, at Shinsegae, a large department store in Seoul. She asked us to design the invitation.

We knew that Vanessa's performance would revolve around the flag of South Korea. Thirty-two female models were choreographed to form the shape of the Korean Flag, the 'taegeuk' ('yin-yang'), representing the separation between North and South Korea.
(Note: we are not saying that the 'taegeuk', as it is used on the Korean flag, is representing the seperation between North and South Korea; we are saying here that Vanessa Beecroft's choreography was representing that seperation, or at least, that was her intention. Just to be absolutely clear about this).
So we designed an invitation that used a very abstract variation of this Korean flag. We tried to emphasize the idea of separation by dividing the two sides of the circle over the two sides of the paper; in other words, each side of the paper carried one half of the circle. 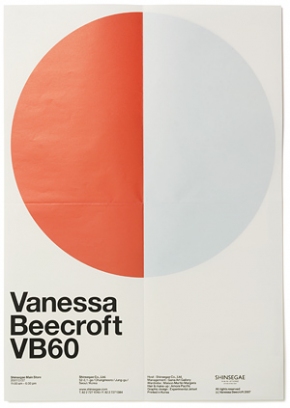 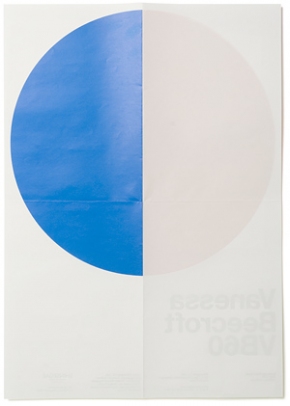 The invitation was basically an A3-sized mini-poster, printed on very thin paper (and sent folded in a clear plastic, A5-sized bag/envelope). Shown below two images: first, the frontside of the invitation; then, the back of the invitation. As can be seen on these images, the 'shine-through' effect made the circle full again.

Other projects we worked on for Vanessa Beecroft include VBRS, VB61, VB62, VBDP and VBSS.