We've created a LSD blotter sheet before, as part of a pop-up book we designed in 2004 for Marc Newson (see Pop On / Pop Off). But for some reason, we always felt that we never really took full advantage of it; the blotter sheet was a medium that certainly needed some further exploration. So when the possibility arose to revisit the LSD theme, we grabbed it with both hands.

The Session is an artist publication that appears every two months, published by Amsterdam exhibition space Plan B. Regular contributing editors include Orpheu de Jong (of Newsgroup), Tarja Szaraniec (curator of Plan B and Nieuwe Vide), Kalle Runeson, Matthias Kreutzer, Jens Schildt (of Our Polite Society), Tomas Adolfs and Monica Tormell (of When Hell Freezes Over). Each issue of The Session revolves around one single theme; past issues had titles such as The Colour Session, The Weapons Session, The Secret Session and The Holiday Session. When, towards the end of 2008, the editors decided to publish an issue dedicated to psychedelic art (to be called The Psychedelic Session), they asked us for a contribution. And that's where the LSD blotter sheet comes in.

Shown below the sheet we designed. It's a perforated piece of paper, 170 x 170 mm, consisting of 24 x 24 'stamps', approximately 7 x 7 mm each. The sheet was printed using full-colour mimeography (in Dutch, we actually call mimeographing 'stencilling'). This sheet was then inserted in The Session, as a loose-leaf contribution. 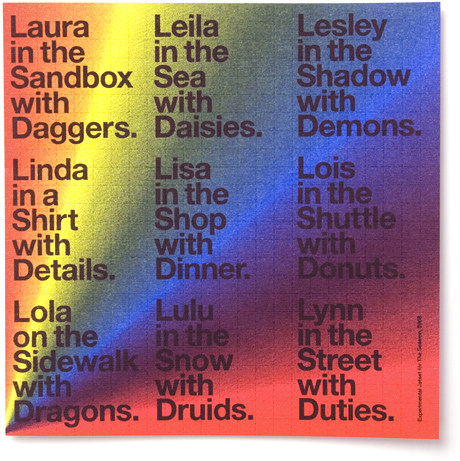 The short haiku-like verses on the sheet were obviously inspired by the Beatles' song 'Lucy in the Sky with Diamonds'. It's a song title of which the acronym famously spells 'LSD' (although, according to Lennon, this was just a coincidence). Our idea was to generate a whole library of titles like this, each sentence featuring a girl's name starting with the letter L, a location starting with the letter S, and an accessory starting with the letter D. We actually wrote hundreds of these sentences, as our first idea was to give each stamp on the sheet its own sentence. However, we quickly realized that the print would become too small if we would actually do that. So we eventually decided to only show a selection of nine sentences. This whole concept, the wordplay with acronyms, is in fact something that has always fascinated us tremendously, and it shows in our work; see for example 2004's SMCS / Stairwell and 2005's Love Aktion Machine.

Regarding the LSD theme: it's interesting that we actually don't use drugs at all (apart from very modest amounts of nicotine and alcohol). In fact, Danny, being completely straight edge, doesn't even smoke or drink, and never has. But despite being drugs-free, all three of us are quite obsessed with the aesthetic language of Sixties psychedelia. In a lot of our work we try to situate the psychedelic experience in a modernist context, an attempt that some might see as paradoxical, but we think it is far from that. It all boils down to this Marxist notion of 'the liberation of senses' (or, in Marx' exact words, "the complete emancipation of all human senses and qualities"). It is there where psychedelia and modernism meet.

The Psychedelic Session can be ordered through The Session MySpace page: http://www.myspace.com/thesessions

prev: A Toast to Crouwel