Friday November 21, 2008, marked the 80th birthday of design legend Wim Crouwel. There were a couple of events scheduled in the weeks surrounding this date, and one of these events was a dinner party organized by the Stedelijk Museum, the Amsterdam museum of modern art. We were asked, by the museum, to design the invitation for this dinner party.

A year earlier, in the beginning of 2007, we designed another invitation card revolving around Wim Crouwel (see Typographic Architectures 1). That card turned out to be quite a production, involving the building of a life-size typographic installation, and an actual photo shoot in our studio.
For the invitation of the dinner party, we wanted to come up with a somewhat less bombastic plan. Time was limited, there was no budget at all, and besides, when it really comes down to it, we enjoy making simple typographic cards much better than organizing complicated photo shoots.

In the case of the dinner party invitation (the card referring to Wim Crouwel's 80th birthday), we took as a starting point the octagonal typeface Crouwel used in the design of his classic 1975 calendar, and used these eight-sided letters to construct the number '80'.
We then took a quote in which Crouwel described the octagonal typeface ("The 8 is as simple as can be. It is just the 0, in which I made two horizontal stripes.") and placed this quote alongside the numerals.
We liked this quote a lot, because in it, Crouwel specifically mentions the '8' and the '0', the two numerals that together make up the number '80'. By showing Crouwel talking about the number '80' in such a casual, laconic manner, we wanted to suggest that the whole concept of age is a very relative matter. As the cliché goes, "age is just a number", which hold especially true for a man like Crouwel: whenever we meet him, he always seems so much fitter and more energetic than we are.

Anyway, shown below the finished invitation (front- and back), basically an A5-sized card, printed on both sides. The colours used are black and silver: 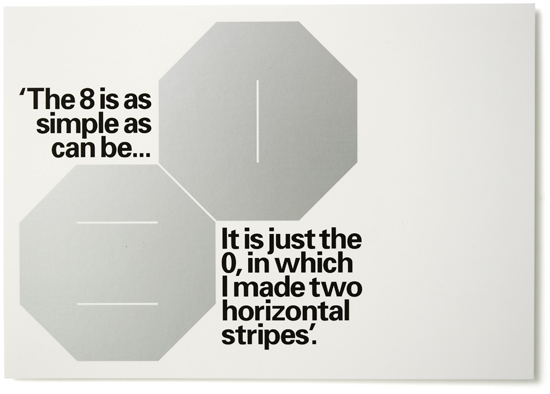 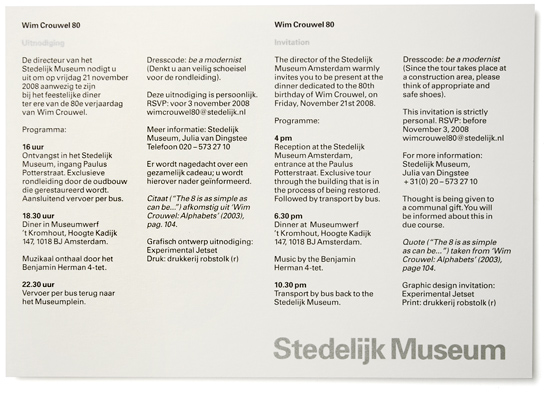 In the first sketch we made of this invitation, the card was actually an A3-sized mini-poster, folded to an A5 format, with an accompanying envelope. The A3 format made sense to us, because the series of invitations we designed in 2004 for the Stedelijk Museum also consisted of A3-sized sheets (see SMCS / Invitations).
However, the Stedelijk Museum rejected the idea of a folded A3-sized Crouwel invitation, on the basis that "old people wouldn't understand it". It was a remark that made us shudder with disgust (a 'gotspe', as we would say here). Fact is, people like Crouwel and his contemporaries are so much more forward-thinking and progressive than the mid-generation that is currently running the Stedelijk Museum will ever be. To hear these petit-bureaucrats make such a dismissive remark about Crouwel's generation really made us cringe. However, because of matters of time and budget, we decided to just roll with it, and adapt the invitation to an A5 format.
We did however refuse to perform all the requests that followed after that. We received correction after correction, asking us for the most incredible things. For example, they insisted that we would remove the full stop (the 'period') after the quote, because they thought it was "aesthetically unpleasing". We explained them over and over again that we thought the full stop was important, as we thought it 'grounded' the sentence, gave it a particular weight; and besides, we came up with the whole concept of using the quote anyway, so we felt the quote didn't really fell under their editorial responsibility. But we might as well be talking to a brick wall, as the same correction kept coming back to us, again and again. In the end, the only way in which we could settle this matter was to give them a really angry phone call.
It's a shame really. We accepted to design this invitation for the love of Crouwel's legacy, even though there was no honorarium involved (because there was no budget), and even though we were completely overworked around that time. But instead of being thankful, the Stedelijk Museum kept just pushing and insulting us, until we saw no other possibility than to become angry. It leaves such a bad taste in our mouths, especially since we have always been very proud of the work we created for the Stedelijk Museum back in 2004.

Anyway, a couple of weeks after we designed the invitation, the Wolfsonian Museum in Miami asked us to design a t-shirt on the occasion of 'Gridnik', a Wim Crouwel retrospective that took place at the Wolfsonian from December 5, 2008, to March 10, 2009. We decided to simply adapt the design of the above invitation to the format of a t-shirt. Shown below the finished shirt, featuring the quote and the number '80', screenprinted in white and matte silver, on black: 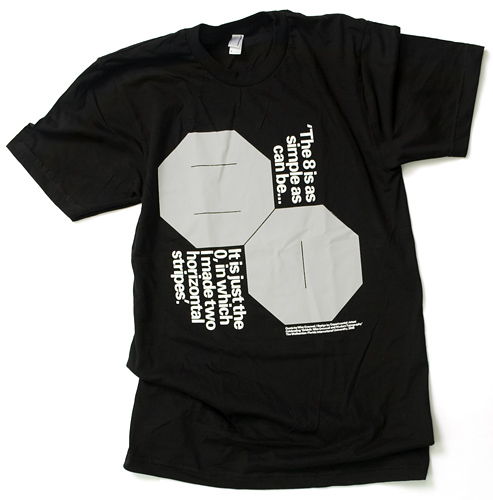 The shirt is available at the museum store of the Wolfsonian, printed on an American Apparel 'Standard American' shirt, 100% cotton, sizes S, M, L and XL. Thanks to Tim Hossler and Cathy Leff for making the shirt possible.