Between 1995 and 1999, we designed various posters and flyers for Paradiso, Amsterdam's premier rock venue. Paradiso plays an important role in the recent history of Amsterdam, and in Dutch counter- and rock-culture in general, so it is a real honour to have been involved with this place. It also has a rich history of graphic design (Martin Kaye's amazing concert posters, to name one example), so we're proud to stand in that tradition.

Thinking about a concept for a new series of flyers, we remembered that one of our friends (if we memorize well, it was in fact Cindy Hoetmer) usually perforated her Paradisco flyers, and put them in her Filofax organizer, as reminders of upcoming nights.
So the concept actually came to us quite quickly: a series of flyers that were already perforated, and had the same size as Filofax sheets, so that they would be ready to use.

This series ran from the end of 1996 to the end of 1999, during which we designed a few dozen of these flyers. In the beginning of the series, we printed the flyers in different metallic colours, and each time the back of these cards would carry a typical Filofax-style function: lined paper, ruled paper, squared paper, etc. Shown below four of these flyers, front and back: 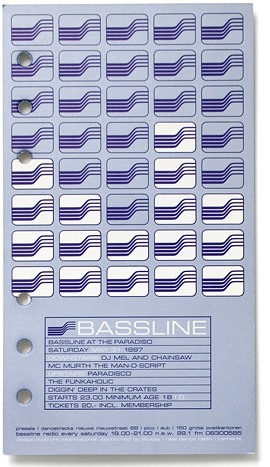 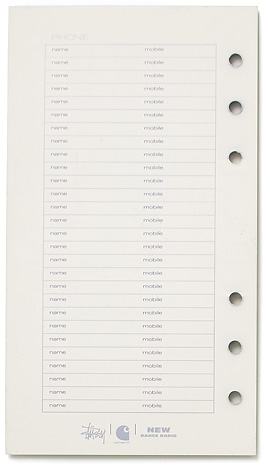 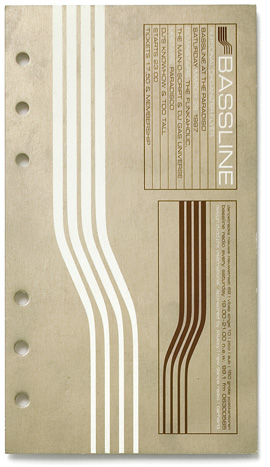 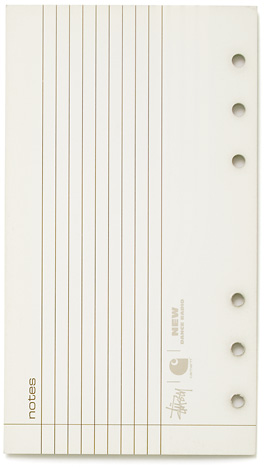 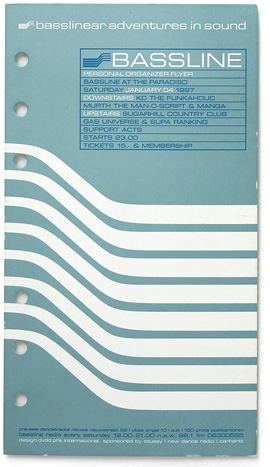 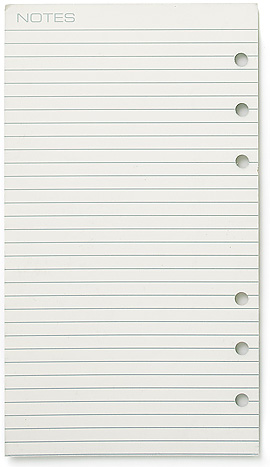 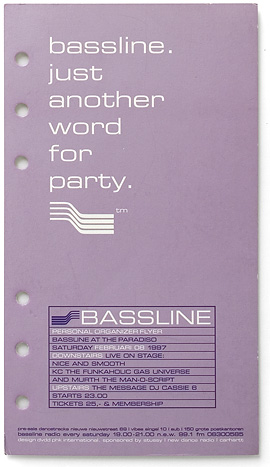 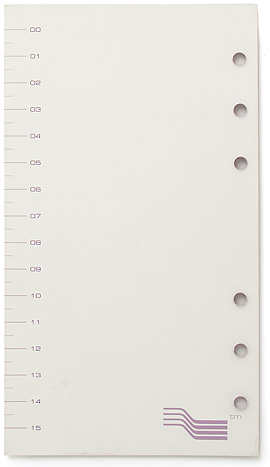 Later in the series, there was a sort of 'silver period', in which all the flyers were silver on one side, and carried a Filofax-like function on the other side. (We also started more and more to lose the Filofax functions, and were beginning to fill the backs with random drawings and snapshots instead). A selection of these silver cards can be seen at Paradiso / Bassline 2.
Towards the end the Bassline series, we got rid of the metallic inks altogether. We started experimenting with colours, found images and slogans, and also phrases that we wrote ourselves. A selection of these flyers can be seen at Paradiso / Bassline 3.

It is interesting: in 1996, when we first presented the Bassline flyer concept to Kees Heus, he wasn't completely convinced. He found the graphic language too cold, too sterile for Bassline. He was clearly expecting a more 'funky', graffiti-like atmosphere; in short, he thought that our flyers were not hiphop enough. We did our best to persuade him that our 'cold', bureaucratic language would fit really well within the Filofax concept, and much to Kees' credit, he gave us the benefit of the doubt. So we had his approval, and proceeded as planned.
A year later, in 1997, we received a phone call from a record company, asking us if we wanted to design a sleeve "in that typical hiphop style that you guys also use for your Bassline flyers". In other words, in a year's time, our flyers transformed (in the perception of some people) from 'not hiphop enough' to 'typical hiphop'.
Around that time, this really got us thinking about the whole idea of 'genre-based' design. When Jamie Reid designed the sleeve for 'Nevermind the Bollocks', he wasn't trying to create a punk sleeve, because around then, there simply was no standard for punk sleeves yet. And when Peter Saville did his Joy Division stuff, he wasn't concerned whether the sleeves looked 'new wave' enough or not, because that genre of graphics simply didn't exist yet. In other words, we realized that genres are for designers to shape and break. That was an important realization.