We designed hundreds of flyers for Paradiso, but surprisingly only a handful of posters. There were specific reasons for this; to read more about this, go to Paradiso / Posters 1, and scroll down. For now, we would like to show a small selection of three posters we designed for Paradiso club night Bassline: 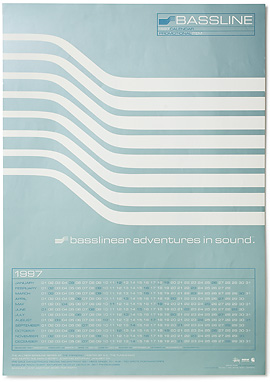 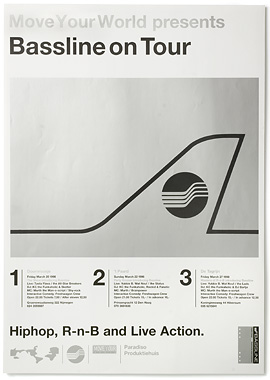 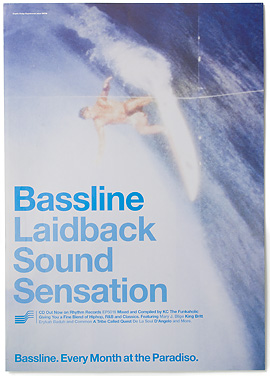 We admit, the posters look very different from each other, but you shouldn't forget that there are large gaps of time between them.

The first poster (size A2), designed towards the end of 1996, was a promotional item to announce the start of Bassline. It was in fact a calendar, fitting well with the whole Filofax concept that we developed for the Bassline series as a whole (see Paradiso / Bassline 1).

The second poster (size A2) was a poster we designed in the beginning of 1998, to announce a Bassline tour. For this poster, we turned the Bassline ‘swoosh’ into an airplane logo. The silver background is typical of the Bassline flyers of that time (see Paradiso / Bassline 2).

The third poster (size A2) was designed in the summer of 1998, to announce the release of a Bassline CD called ‘Laidback Sound Sensation’. It fits very well within the series of Bassline flyers we designed around that time (see Paradiso / Bassline 3), as it is a poster based on a ‘found’ image.
The folds you see in the poster are not real folds, but photographed folds; the image of the surfer is in fact a photographed detail of an existing poster that was already folded. (In a way, this poster was a ‘poster about a poster’, a theme that still plays a large role in our work).