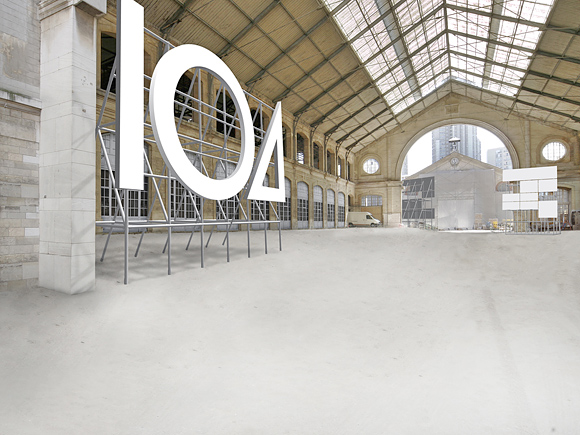 In the beginning of 2007, we were invited by a group of French curators to visit them in Paris. We met them in a very large construction pit, an enormous empty hall, measuring almost 36.000 square meters. This hall was to become the location of 104 (Le Cent Quatre), a new French cultural institute that would open its doors in October 2008. Situated in the 19th arrondissement, 104 is a very ambitious project, housing several exhibition spaces, theatre halls, concert venues, stores, and apartments for artists-in-residence.

To make a long story short, the curators asked us us to develop their graphic identity and sign system. Or to be more precise: they asked us to design a graphic manual, a ‘charte graphique’, for other designers to work with. It was a very complicated construction: because of all kinds of reasons (legal, political, bureaucratic and cultural reasons), we were only allowed to work on the graphic manual, while other design studios would then be responsible for applying this manual to all the different parts of the graphic identity (sign system, website, etc.).
It was an awkward construction, especially for us. In our way of working, we put a lot of emphasis on the finished, designed object; we really believe in producing actual, physical artifacts. To shift our focus from making objects to creating instructions was not easy for us. In fact, it proved to be impossible, and this whole situation turned out to be one of the reasons of our break-up with Le Cent Quatre in 2008.
But let's not move ahead here, and return to the beginning of 2007. Although we realized it would be a difficult, bureaucratic project, we still decided to accept the assignment. Even though we knew it could turn into a total failure, we still thought it was exciting to be involved.

During our first meeting, we noticed that one of the curators' main themes, program-wise, was the concept of the 'work-in-progress': the idea that 104, as a project, is never finished, always evolving, eternally 'under construction'. So our starting point was to search for a sign system that would refer to the concept of the 'work-in-progress'. That's when we became interested in the concept of scaffolding.
A scaffold (in French, 'échafaudage', in Dutch 'stellage' or 'steiger') is a structure that automatically refers to 'work-in-progress'; it is immediately associated with construction sites, and the activity of building in general. We realized that a sign system based on the idea of scaffolding would be a constant reminder of the continuous cycle of building, demolishing and rebuilding. An échafaudage also has a very natural appearance. It has the casualness of a 'ready-made' object; it will fit in the building in a completely natural way.
What we also found interesting about échafaudages is the concept of the iron construction. In Walter Benjamin's 'The Arcades Project' a whole chapter is dedicated to the history and ideology of metal constructions, and the use of iron in winter gardens, railroad stations, the Eiffel Tower, but especially the use of iron in passages and arcades. And the building of Le Cent Quatre really is an arcade, a passage. It is a street with a roof, built towards the end of the 19th century.
We already knew Walter Benjamin wrote a lot about this subject, so when we got involved in the project, one of the first things we did was studying his book 'The Arcades Project', looking for clues and starting points. The fact that he wrote so much about iron constructions reinforced our idea to do something with échafaudages. By using iron constructions for the sign system of 104 (in the form of échafaudages), we hoped to emphasize the early-industrial architecture of Le Cent Quatre.
Shown below some early sketches of what we originally had in mind for the sign system, and some 'maquettes', basically small scale models to explain our ideas to the directors of 104: 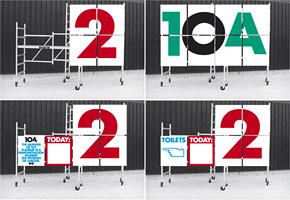 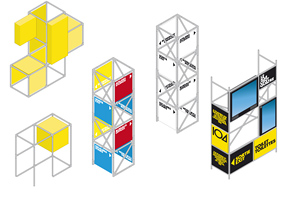 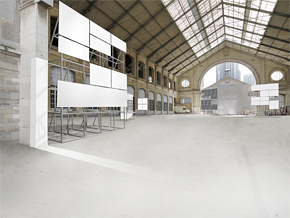 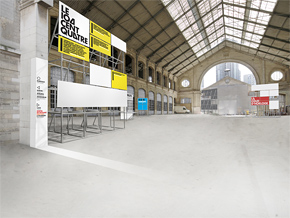 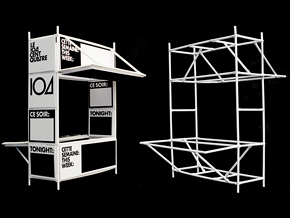 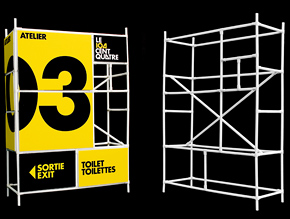 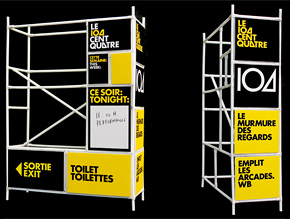 We already mentioned Benjamin's fabulous 'The Arcades Project', a large collection of observations and notes about the Parisian cityscape, written from the viewpoint of the 'flaneur', the aimless wanderer, the person strolling through the streets of Paris. Benjamin describes these streets in detail, and writes about barricades, billboards, kiosks, sandwich-men; in short, street furniture. These descriptions were really inspirational to us. Another influence was the idea of the 'street as a theatre', or the 'theatre as a street', as expressed in the Constructivist stage designs (decors) of Liubov (Lyubov) Popova.
In short, the more we worked on it, the more we were convinced of the idea of using scaffolding structures as a sign system. Our plan was to create a sort of modular system of street furniture, a family of abstract forms referring to billboards, benches, traffic signs, pavilions and kiosks: 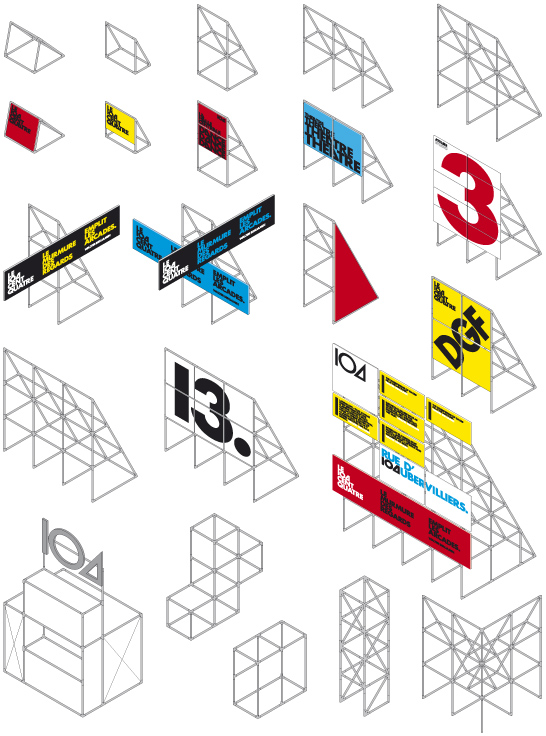 So basically, our idea was that these échafuadages would reinforce the idea of Le Cent Quatre as a street in itself, a fully functional street. By placing street furniture in there, or better said a sign system referring to street furniture, Le Cent Quatre would become a street, or a model of a street. At least, that was our plan.

As we already wrote, we were supposed to work only on the graphic manual, and not on the actual technical execution of the sign system. But luckily, we did see a chance to actually produce a couple of these scaffolding structures. Towards the end of 2007, a year before the actual opening, there was a large event in the hall (or better said, in the construction pit), a sort of 'sneak preview' for the public. It was called 'La Traversée', and we did manage to actually design some early échafaudages for that event: 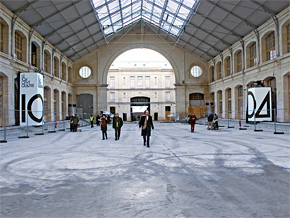 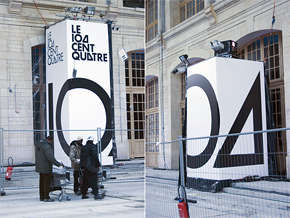 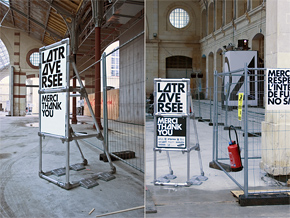 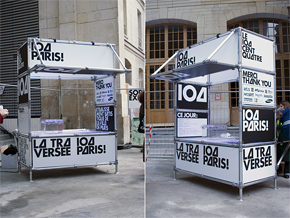 Regarding the logo: it is interesting, when we first talked with the curators, they said to us that they didn't want to have a logo. They were coming from a more postmodern, French way of thinking, and they thought that a logo would be too fixed, too static. So originally, we designed the logo just for ourselves, to have some material to sketch with. We slipped in some ideas for logos in our sketches for the sign system, but we actually expected that these logos would be voted off. Luckily, the curators loved the logos, so these logos ended up becoming an important part of the graphic identity.
The logo consists of three elements: a line, a circle, and a triangle. Together, these three elements form a stylized '104'. We really like the idea of these geometric forms as 'building blocks', as 'bricks'. We eventually developed a full logo system, in different weights, and also versions containing the text in full: 'Le Cent Quatre':

A couple of months in the project, after the logo was already approved by the directors, the city council also wanted us to add the text 'Etablissment Artistique de la Ville de Paris', so currently the whole logo system looks like this:

When we first visited the building, there was an old sign hanging at the entrance, a logo that said SMPF, referring to the old function of the hall: 'Service Municipal des Pompes Funèbres' (see below). We really liked this blocky, geometric logo, and we hoped that the 104 logo we designed would refer to that same spirit of early-industrial geometry: 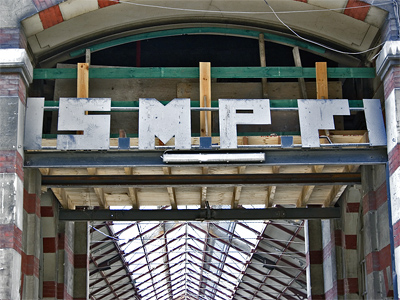 What we also liked about the 104 logo is the fact that the line, the circle and the triangle very much refer to the idea of moving in space, of walking through a street. The stripe can be used as a line to be followed, the circle can be used as a spot to mark a location, and the triangle can be turned into an arrow. So the logo already contains, in itself, a miniature sign system: 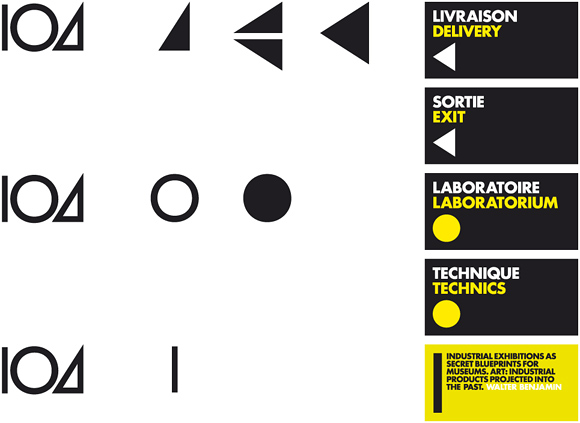 The typeface we used, in the 104 graphic identity as a whole, is Futura. As can be seen below, we replaced, in the standard Futura alphabet, both the letter 'A' and number '4' for a triangle, and the number '0' for a round 'O', to sort of reinforce the link between the logo and the typeface: 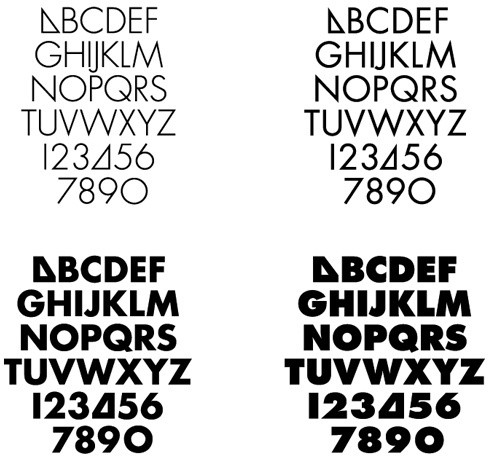 There are several reasons why we went for Futura. First of all, Futura is a geometric typeface, so it fits very well with the logo. And secondly, it's a typical early-industrial typeface, referring very much to the transition from the 19th century to the 20th century. So in that sense, it works very well within the context of a passage, an arcade.
(True, Futura is a German typeface. But we think that the fact that Futura is German doesn't necessarily have to be problematic in a French context. In fact, there is a certain parallel to be drawn between Futura in the context of 104, and Walter Benjamin in the Parisian passages. Both are German outsiders from the beginning of the 20th century, placed in the context of Paris in the late 19th century).

I's funny: after we decided to use Futura, we were walking around in Paris, and noticed that an overwhelming amount of Parisian stores (hairdressers, laundrettes etc.) use Futura in their signs. We thought it was brilliant; we realized that using Futura in the context of 104 would really emphasize this whole idea of Le Cent Quatre as a model of a street.

As we already explained, what made this an unusual (and uneasy) assignment for us was the fact that we weren't allowed to design everything ourselves. From the start, the plan was that we would be creating an underlying graphic identity, for other designers to work with. However, once in a while, there were some lucky opportunities for us to design some actual printed matter for Le Cent Quatre. Shown below some objects we ended up designing ourselves: a t-shirt and bag, both designed for La Traversée; a couple of button badges, designed for various occasions; a New Year's card (basically an A3-sized mini-poster, to be folded to an A5-format); the frontcover of an A4-sized brochure and two A5-sized invitation cards; 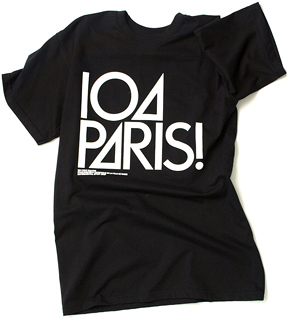 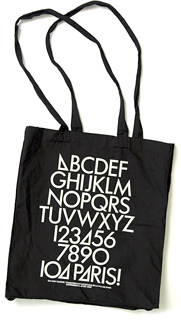 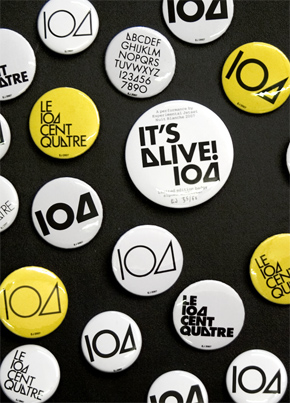 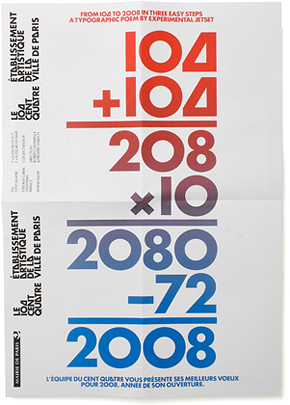 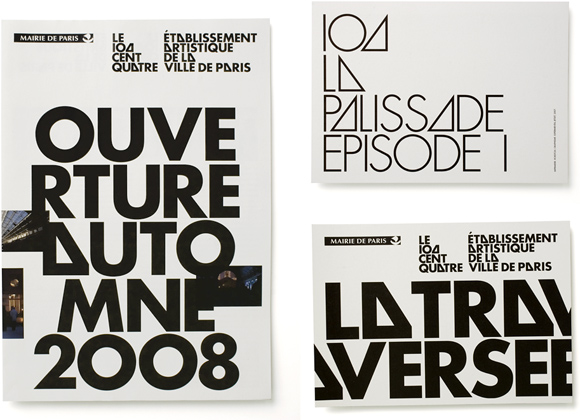 (Shown above is just a small selection; more examples of printed matter can be found in the downloadable PDF at the bottom of this page).

Working on Le Cent Quatre kept us occupied for the better part of 2007, and also for the first half of 2008. To read about the projects we did for Le Cent Quatre in 2008, see 104 / Le Cent Quatre 2. Attached below is the finished, complete graphic manual, as a PDF-file; feel free to browse through it. We would like to thank Frédéric Fisbach, Robert Cantarella and Constance de Corbière for inviting us, Naïa Sore and Cécile Renault for their ongoing support, and everybody else at 104 for collaborating with us.

next: The Metric Songbook