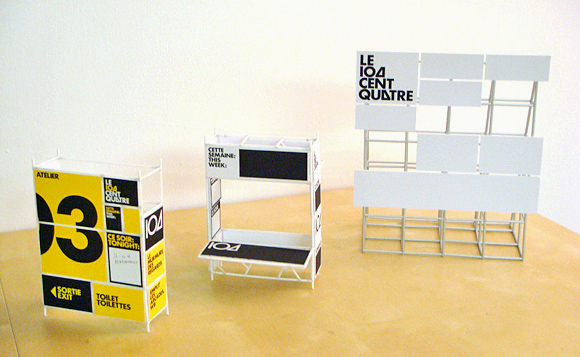 104 (Le Cent Quatre) is a French cultural institute for which we designed the graphic identity and the sign system (or better said, we created the graphic manual, for other designers to work with). The first part of this assignment was done in 2007; to make sense of the whole story, you should really first read 104 / Le Cent Quatre 1.
Below are some notes about the second part of the project, the part we did in 2008. It is just a small selection; to see a larger amount of work, you can download the PDF at the very bottom of this page. But before anything else, first read 104 / Le Cent Quatre 1; as we already mentioned, this whole story doesn't make much sense without reading the first part.

One of the first things we did in 2008 was giving a workshop to students. Although 104 was officially not open yet, they already had an educational program running, for which they asked all artists connected to 104 to give workshops to local art academy students.
The workshop took place on January 11, 2008. In short, we gave all participating students an A2-sized map of the area around 104, and asked them to use this map to create a new, subjective map of the neighborhood. Those interested in reading the full assignment can download the A2 here:

We folded the A2 poster to an A4-format, and put it in a ziplock bag, together with a badge (bearing the slogan '104 Cartographism') that we made especially for the occasion. And that's how we handed out the assignments to the students.
Shown below some images of the workshop (photos courtesy of the 104 website). First a picture of the badge, then a picture of some of the participating students, and finally a picture of some of the results:

After the workshop, we worked on countless other things for 104. New versions of the stationery, dozens of brochures, all kinds of proposals. As we already wrote, a large selection of this work can be seen in the downloadable PDF at the bottom of this page.
For now, we would like to focus on just two projects: first, the poster project we proposed to announce the opening of 104; and secondly, the graphic identity of 104 Editions, the publishing branch of 104, and its accompanying website, 104 La Revue.

Let's first start by explaining the poster project. After weeks of negotiating with the directors, we arrived at a very simple proposal: a poster showing the words "Le Cent Quatre / Onze Octobre", referring to the date of the opening. By overprinting certain parts of the typography, the date (October the 11th) is also visible as a set of numbers (11.10.2008). A very basic idea, executed in a clean way. Before we explain some of the problems surrounding this design, we'll first show the A2 poster as it was actually printed: 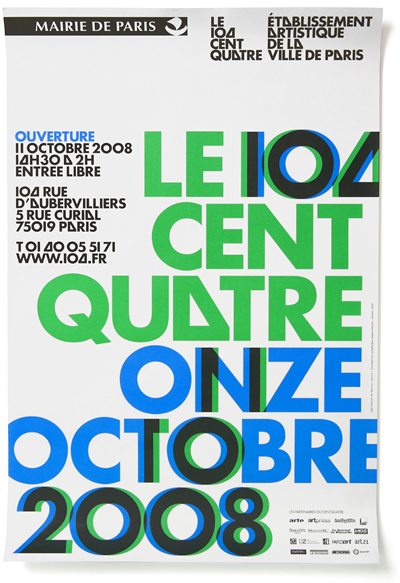 And while we're at it, here's also an accompanying A5-sized flyer (front and back); a design that was actually printed as well: 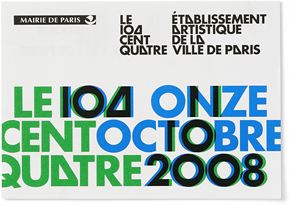 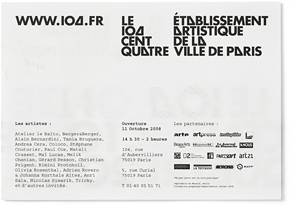 There were many problems we had to deal with during the design of these items, but one of the biggest issues was the combination of colours. Initially, we wanted to use blue and red (instead of the green and blue shown above); however, the directors thought red and blue would be too chauvinistic (the French flag being blue, white and red). Our next proposal was to use a combination of red and green (our original idea was to refer to the concept of 'stereography', and 3D spex are usually red/blue or red/green). Again, the directors rejected the proposal, because they thought red/green would look too much like the Italian flag. We also had to keep in mind that we couldn't use yellow (because "the mayor doesn't like yellow"), and we even received an SMS text message stating that the deputy mayor insisted on using a pink/purple combination. After that, the whole city council got involved, all making conflicting demands. The only way to could solve this mess (and avoid using purple/pink) was to come up with a rational, systematic way to generate colour combinations. So we ended up preparing a proposal in which we showed every logical colour combination, using only primary colours (red, blue, yellow) and secondary colours (orange, green, purple): 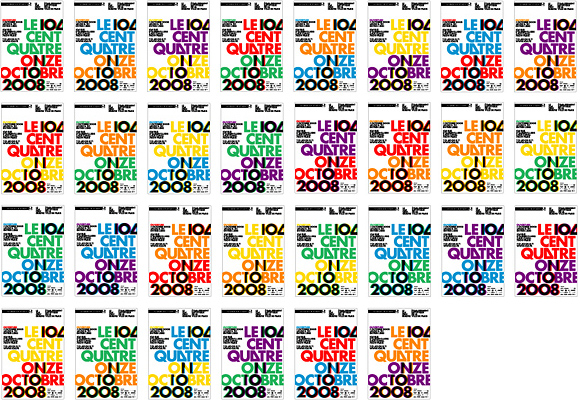 We then removed all combinations with yellow ("mayor doesn't like yellow"), red/green ("Italian flag") and red/blue ("French flag"), leaving the selection looking like this: 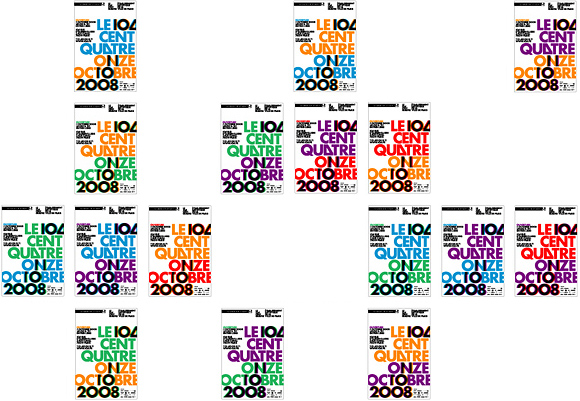 We then removed all double colour combinations: 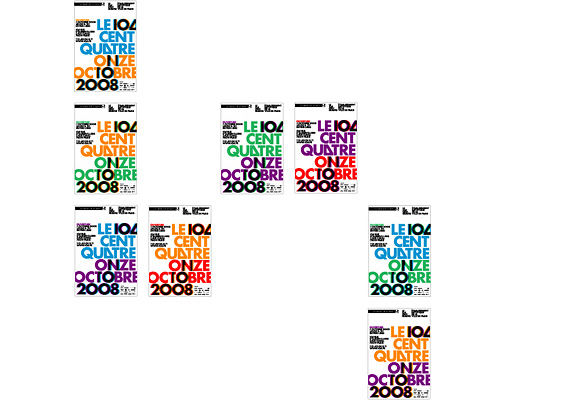 So we narrowed down the choices considerably, and then started pushing the green/blue combination, because that one was our favourite of the remaining combinations. And green/blue it became.

Even though the A2 poster and A5 flyer were both eventually printed, there were a lot of items that were still awaiting approval: posters for the subway, large outdoor posters, etc. For some reason, there was never a decision made about all these remaining designs. It was one huge bureaucratic mess: the directors, the mayor, the deputy mayor, the communication department of the city council, the cultural department of the city council; they all wanted to have a say in this. It just became a big political game that had nothing to do with our posters anymore.
The fact that there weren't any clear decisions made, and the fact that we had no idea anymore who was actually in charge (the directors? the mayor? the city council?) made us decide to quit with the whole assignment, and to break with 104. It was a hard decision, but we saw no other possibility.

Anyway. Let's rewind here, and go back to another project we did for 104, right before we quit. It is the graphic identity for 104 Editions, the publishing branch of 104, and the templates for 104 La Revue, the accompanying website. Let's first take a look at 104 La Revue.

Talking with the directors about their curatorial plans for 104 La Revue, we noticed that they were very interested in the ideas of the German philosopher Aby Warburg, and his 'Mnemosyne Atlas'. So we came up with a website based on the idea of a 'mnemonic grid', a composition of repeated words that suggests the storage of memories. Shown below three templates we designed for the website: 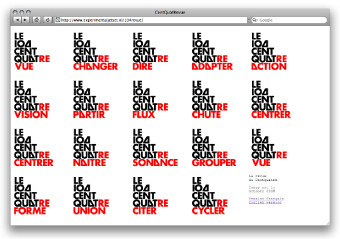 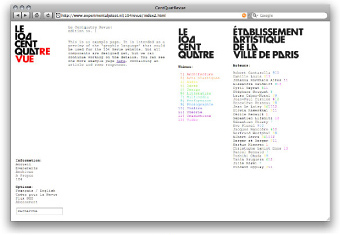 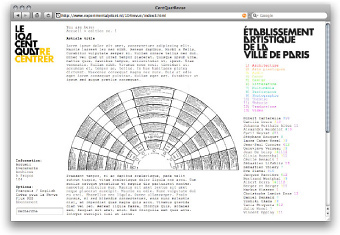 For the graphic identity of 104 Editions, we kept this idea of the mnemonic grid, and applied it to a whole series of different formats. We designed a full system of templates, for use on all possible publications. In short, we based our templates on a simple 2:3 proportion, and categorized the formats as follows:

Shown below some pictures of 'dummies' (empty, paper models of books) that we used to propose the idea to the directors: 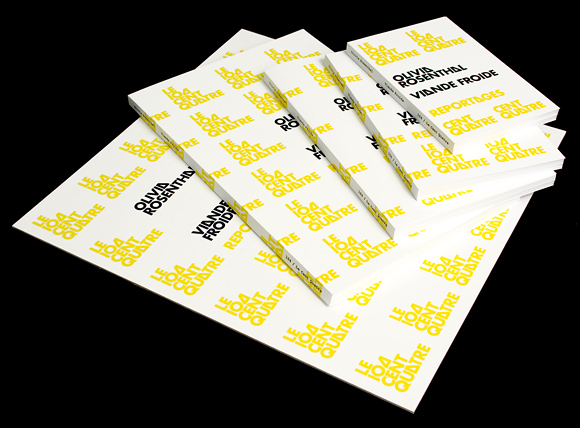 The first book, Olivia Rosenthal's 'Viande Froide', was actually printed, featuring a cover designed by us. Shown below the back- and frontside of this publication (140 x 210 mm): 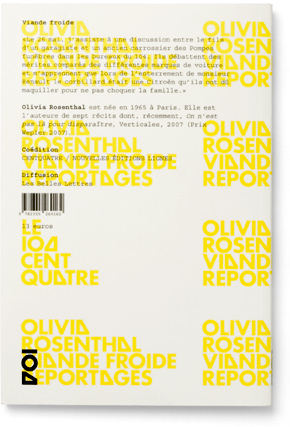 While we are at it, we might as well show something else we have lying around. It's a cardboard folder we designed for 104, to be used as a press kit. It's basically a slim box-like sleeve, to hold A4-sized documents: 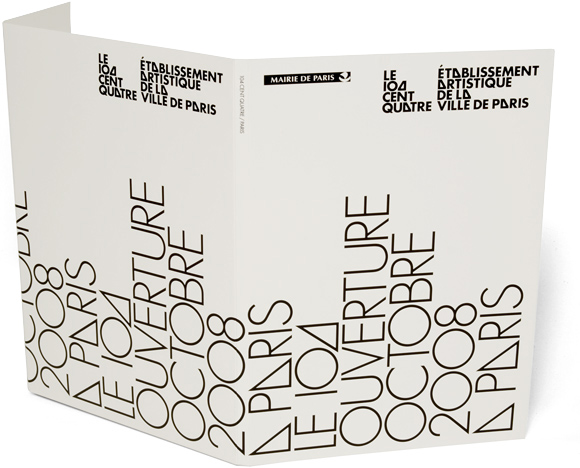 As you see, on this press kit, we used the thin variation of the logo, while on the publications shown earlier in this chapter, we used bold versions. The reason for this is quite simply that we wanted to divide all four versions of the logo (thin, medium, bold and black) over all publications, in an even way. All different variations can be seen in the PDF below.

The opening of 104 took place in October 2008. Right before the opening, we quit working for 104 (but only after we finished everything we still had to do for the opening).
So, why did we stop working for 104? There were actually a couple of reasons. We already mentioned one reason in the first part of the story, 104 / Le Cent Quatre 1. Another reason was the whole situation that developed around the poster project; it was an impasse that was killing us. Then there were a couple of other causes; we quickly describe some of these reasons in the graphic manual below (the downloadable PDF at the bottom of this page).
All in all, it was a very stressful and intense project, although we don't blame 104 for it; just like us, they had to deal with this whole political game between architects, city council, mayor and deputy mayor. We were lucky we could get out, while they (the directors of 104) are still stuck in the situation. So we actually feel sorry for them. We don't blame them at all.

Below is the final and complete graphic manual ('charte graphique'). It was developed in installments; every time a certain design or template was approved, we added it to the manual. Sometimes the city council rejected something, months after the directors had already approved it; in that case, we didn't remove the design from the manual, but just added another chapter, in which we negated the previous chapter. In that sense, it's a manual that really shows the development of the graphic identity; it shows not only the remaining, 'winning' parts, but also the rejected proposals, and the failures. The manual can be downloaded here:

We would like to thank Frédéric Fisbach, Robert Cantarella and Constance de Corbière for inviting us, Naïa Sore and Cécile Renault for their ongoing support, and everybody else at 104 for collaborating with us.