We were actually 'double-invited' to participate in the GraficEurope conference that took place in 2003 in Barcelona. First of all, we were invited to give a lecture in the main program of the conference (see Blow-Up). Secondly, we were nominated by Wim Crouwel to contribute to an exhibition that would take place during the conference, a group show on 'emerging designers'.
Participating emerging designers included Manuel Raeder (nominated by Graphic Thought Facility), Kerr/Noble (nominated by Emily King), and several others. A dozen designers in total.

The set-up for the show was quite straight-forward. Each designer had to design one A1-sized poster, to be printed (digitally) by Hewlett-Packard. The given theme revolved more or less around the subject of 'personal influences'. In other words, we had to come up with a poster exploring our main inspirations and influences, in the field of graphic design.

Around that time, we were also working on the invitation for Lost & Found. As we already explained in the text about that particular invitation, March 2003 was a very awkward month. The United States had just attacked Iraq, which was an event that really troubled us.
We felt it would be the natural thing to do to design a poster referring to the idea of anti-war posters. And since we were totally obsessed with John Lennon and Yoko Ono's 'War is Over!' poster (1970), we decided to revisit that poster again.

One of the subjects we try to explore in our designs is the question of how opposite forces can be brought together, either formally or conceptually. So we immediately started to look for an opposite force, a view that would counter the anti-war iconography of John Lennon and Yoko Ono. Not surprisingly, we found that voice in F.T. Marinetti's novel 'Zang Tumb Tumb' (1914).
'Zang Tumb Tumb' is the account of the battle of Adrianopolis (1912) in which Marinetti fought as a 'Futurist-soldier'. As Marinetti once declared: "We will glorify war, the world's only hygiene – militarism, patriotism, the destructive gesture of freedom-bringers, beautiful ideas worth dying for...". The title of the novel is in fact a phonetic representation of a bombardment ("Zang Tumb Tumb Tuuumb Tuuuum Tuuuuum Tuuuum").
The resulting poster (shown below) is a synthesis of two polar opposites, two different views on war. The lay-out refers to the 'War is Over!' poster, while the slogan refers to the 'Zang Tumb Tumb' novel.
Moreover, the poster brings together two of our main influences: Futurism and Sixties pop culture, often seen as the beginning and end of modernism. (A project in which we tried something similar would be our Dark Side of Bauhaus series). 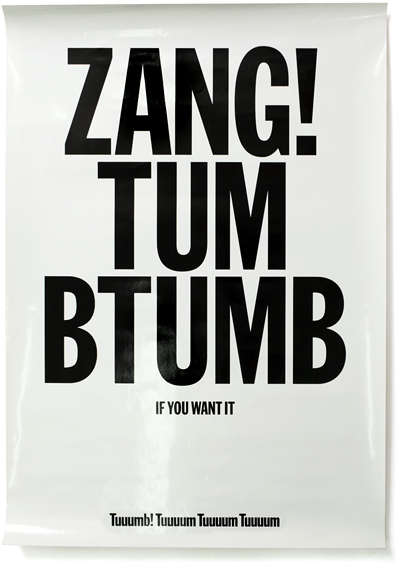 After its appearance in the GraficEurope conference, the poster has been published in issue 6 of Dot Dot Dot, and issue 2 of Graphic. The poster was also included in an anti-war poster-set designed by Tony Brooks (of Spin) that was supposed to come out later that year (2003), but eventually never got published. It also appeared in the second issue of FR David (Winter 2007), a magazine published by De Appel.