Kagami was a short movie by Amsterdam director Benjamin Landshoff, starring actor Daniel Nevitt. Benjamin asked us to design both the poster and the title sequence.

The word KAGAMI means mirror in Japanese, and since the movie revolves around psychological themes such as introspection and self-reflection, we decided to design a poster in which the portrait of actor Daniel Nevitt is mirrored in its own image. It's unclear what is the actual image, and what is the reflection of that image. In fact, the poster can be used in two ways: it can be turned 180 degrees, and still remains a portrait. Shown below the A3-sized poster, in two different positions: upside-up, and upside-down. 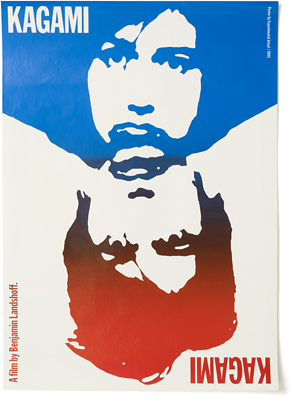 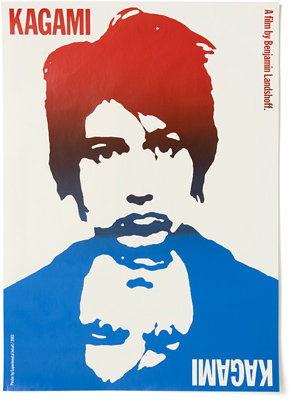 The colours used are red and blue, referring to the conflicting sides of the psyche (hot/cold). As a matter of fact, while the word KAGAMI means mirror, the word KA means fire, and MI means water. So the red and blue refer in a very literal way to fire and water. The portrait itself very much refers to GA, which means ego. To put it in a convenient diagram:


(To make it even more complicated, the word KAMI actually means god, suggesting that god is a unity of opposites, mirroring itself in the ego, but let's not go there; it's already esoteric enough as it is now).

The printing process that was used for this poster is known as 'split fountain', called 'iris druk' in Dutch (which shouldn't be confused with the American 'iris print'). Basically, it's printing with one plate (or one screen), using two (or more) inks at the same time, to get a specific colour gradient. (It also means that every print will be slightly different).

We adapted the poster to an A6-sized screenprinted postcard (not shown here) as well.

We also designed the title sequence and credit sequence. We kept it quite simple; just the word KAGAMI, projected on the clouds. That opening shot (of the clouds) is also used as the last shot of the movie, so it's a pretty significant image; it seemed quite logical to use it as the background for the title sequence.
Unfortunately, because of technical reasons, we can't show the title/credit sequence right now, but we'll try to upload it as soon as possible.