Terminal 5 was a group exhibition that took place from October 1, 2004, through January 31st, 2005, in the TWA airport terminal at JFK Airport (NYC). We were approached by the curator, Rachel K. Ward, to design a series of posters to be hung in bus shelters throughout NYC. These posters weren't necessarily meant to advertise the exhibition; they were part of the exhibition itself (which is why, on the Terminal 5 website, our contribution was referred to as a 'public space art project').

Our starting point was the terminal itself, a beautiful optimistic 'space age' building, designed in the late Fifties by Eero Saarinen, and thus a typical example of late-modernist 'International Style' architecture. Since Saarinen was born in Finland, we couldn't help but see the terminal also as an icon of the transition from (pre-war) European modernism to (post-war) American modernism. This transition is something that interests us quite a bit: on the one hand, you can see the emigration of Bauhaus leaders such as Mies van der Rohe and Walter Gropius to the U.S. almost as a fulfillment of modernism, an exodus to the promised land of newness. On the other hand, what happened to modernism in the U.S. can also be seen as the corruption of it. It is generally assumed that, once Bauhaus was transformed into International Style, it lost its social(ist) agenda, and became a symbol for capitalism, as the favored style for banks, upscale bungalows, large offices (such as the Seagram building in NYC) and airports.

In our series of posters, we wanted to show this ambiguity. We took three historical, European, early-modernist quotes (respectively originating from Futurism, De Stijl and Bauhaus) and transformed these quotes into archetypical advertisements, for a fictitious airline company. So in this work we're more or less asking ourselves whether modernism in such a commodified and corrupted form still has a critical or utopian dimension.

There was something slightly surreal about being confronted with these posters (sized 165 x 112 cm) in the streets of New York. Seeing these quotes in a modern-day context was much more absurd and blatantly anachronistic than we ever anticipated. Which is good, we guess.

The quotes are by Filippo Marinetti (1909), Theo Van Doesburg (1917) and Laszlo Moholy-Nagy (1929). To keep it conceptually tight, we took all three quotes from 'Theory and Design in the First Machine Age' by Reyner Banham (originally published in 1960 by Architectural Press, the version we have is published in 1983 by MIT Press), a beautiful book which clearly exposes the ideological differences between early- and late-modernism.

The photographs shown below were taken by David Reinfurt (of New York design studio O.R.G.), who was also responsible (together with Sarah Gephart) for the design the beautiful Terminal 5 catalog, published by Lukas & Sternberg. 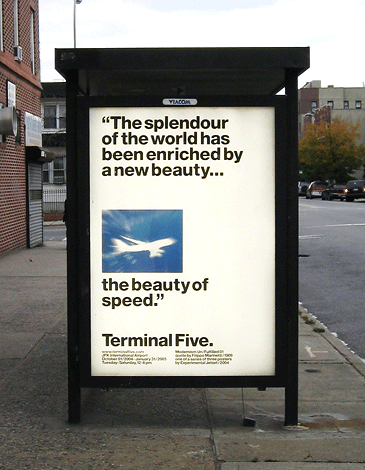 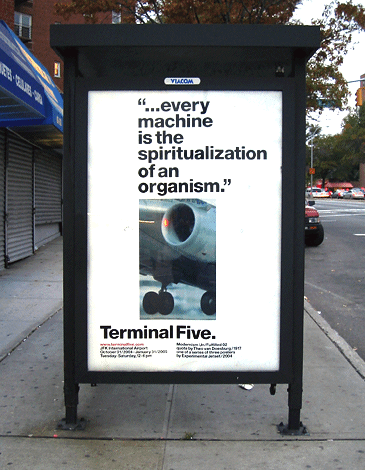 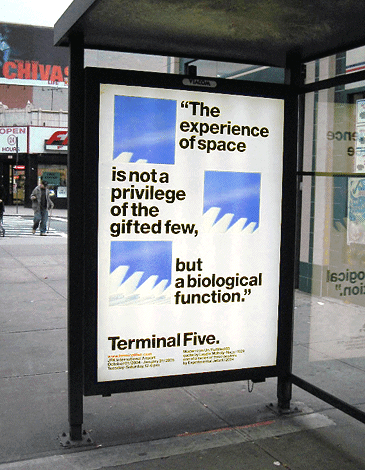 Next to the original posters, we also produced a limited edition series of replica posters, sized 77 x 55 cm. Shown below are the plastic, transparent tubes that we used to package these posters. Each tube contains three replica posters and an extra cover poster, produced in a limited edition of 100, screenprinted by Imaba Zoetermeer, signed and numbered by us. We gave some of these tubes to friends and sold a few through the store Colette (Paris).

Thanks to Ann Holcomb and The Mondriaan Foundation for organizing our stay in NYC.