Shown below a simple A2 program poster, featuring a large SMCS acronym, placed next to a so-called 'ladder' (a listing of all the exhibitions). In its unfolded form, this poster was hung in bars and clubs in Amsterdam. In its folded form (as an A4 program booklet) the poster was put in the museum's A4-holders, for the visitors to take away.
Because of some stressful last-moment antics, we messed up. That's why the composition of the type, especially the lining (leading) seems a little sketchy, which is also the reason why this poster isn't our most popular piece. Luckily, we later had a chance to refine the composition, and turn the design into a large-size outdoor poster: see SMCS / Posters. Then there's an A2-sized version of the invitation that we designed earlier for Metallic Yellow, a group exhibition on the subject of gold. See also SMCS / Invitations.
One of the featured artists, Robert Smit, was the winner of a prestigious award (the Francoise van Bosch Prize), which is the reason behind the gold disc on the poster: it's a reference to the 'golden album', an award that is quite common in the pop industry. Although Robert Smit was awarded with a totally different prize, in a totally different cultural sphere, we still thought the reference was appropriate, or slightly amusing at least.
Added to that, the golden disc on the poster also stands for the sun, as we figured that the fascination for gold is actually a covert form of solar worship. 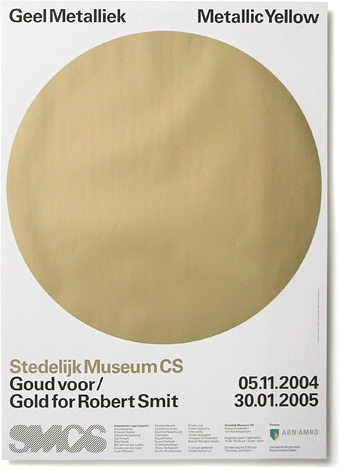 Next a small flyer for 20/20 Vision. The name of this exhibition was actually thought up by us; Leontine Coelewij, the curator of this exhibition, asked us if we wanted to invent a title, and after considering the theme of this group show we came up with '20/20 Vision'.
The work of the artists involved in this group show dealt mainly with the subject of visual culture, so we figured that '20/20 Vision' would be a nice title, as it refers to visual and optical science. And since this exhibition was the first show of contemporary artists to take place in the new museum, we thought '20/20 Vision' would also neatly refer to the idea of a clear view, and a new beginning.
A more obscure motive involved the fact that the title refers to a Beach Boys album. But to be honest, the most important reason for us to come up with this title was the fact that we already anticipated the fact the the slash in '20/20' would work really well with the diagonal lines of the SMCS identity. (That is why it's funny that, when we turned the title into a logotype, the first thing that we did was to remove the slash. Somehow we thought the fact that the slash was missing, but still visible, really fitted the theme).

Shown below is a floppy, one-sided, A6-sized flyer, printed black on white. These flyers were enclosed with the first invitation (See SMCS / Invitations). We also designed a title wall based on the 20/20 Vision logotype (See SMCS / Title walls). (We also designed a really nice black & white A2-sized poster for 20/20 Vision, but due to a lack of time and budget, this poster was never printed). 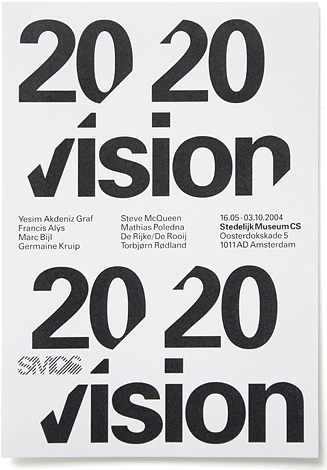 Then a 16-page, bilingual, A5-sized booklet, containing general information about the museum. To stress the new location of the museum, we placed the SMCS logotype in such a way that the front cover only shows the letters 'CS' (which is underlined by the sentence 'Next to the Central Station'). For this brochure we used white staples – we must have been in a frivolous mood. Shown here the back (left) and the front (right), followed by a selection of spreads: 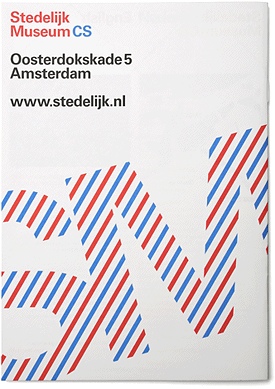 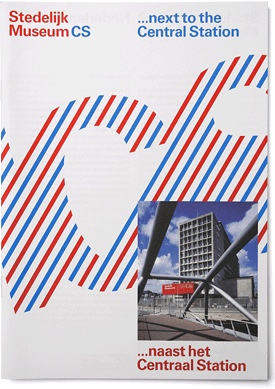 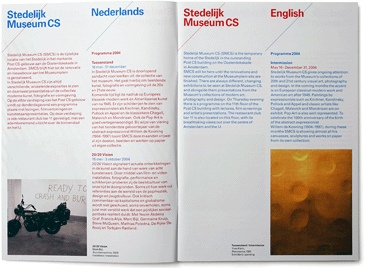 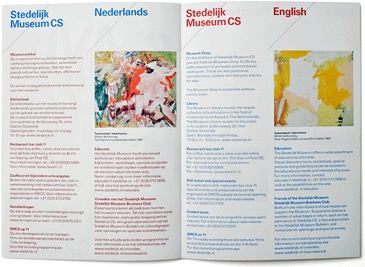 The second brochure we designed for SMCS was a streamlined spin-off of the first one. It was basically a two-sided, A2-sized poster, that could be folded in two different ways. Folded in one way, it becomes an A5-sized English booklet. Folded in another way, it becomes an A5-sized Dutch booklet. Quite a simple system, underlining the bilinguality of the SMCS identity. Of the total edition, half of the sheets were folded into English booklets, the other half were folded into Dutch booklets.
Displayed below are the A5-sized frontcover of the Dutch version (left) and the A5-sized frontcover of the English version (right), followed by images that show the brochure in partly unfolded and in completely unfolded form. (Completely unfolded, the booklet turns into an A2-sized sheet). 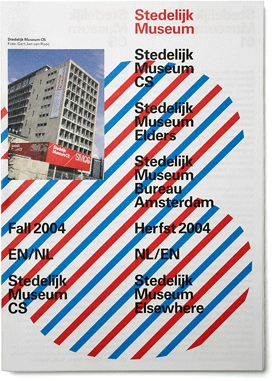 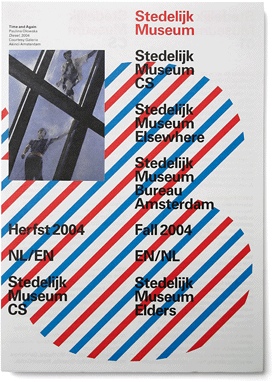 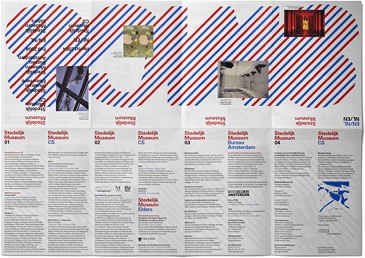 We continue with a simple A6-sized voucher, a ticket for free admittance, sent out to members, relations and acquaintances of the museum. For this postcard we used the same typographic language as we used before, for the Stedelijk Museum Bulletin: bold capitalized lettering, in red and blue. First the front, then the back: 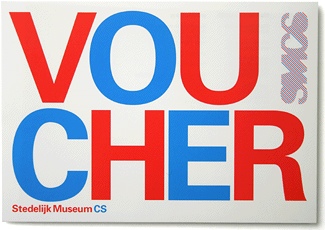 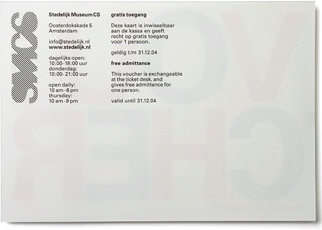 Then a set of six plastic membership cards (85 x 50 mm each), referring to the hierarchy (platinum, gold, etc.) of typical creditcard systems. The cards come in six different colours: gold, red mixed with gold, and red; and silver, blue mixed with silver, and blue. In other words, the original SMCS colours, red and blue, are here morphed into gold and silver. Shown here are only five of the six cards; for some reason we lost one. But you get the idea. 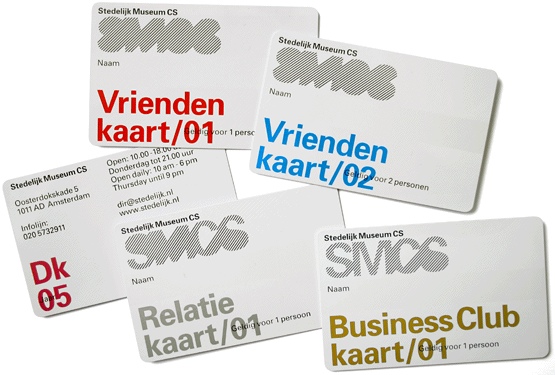 Shown below a small series of four so-called Junior Agendas (Spring, Summer, Fall and Winter), folders that list all the children's activities in the museum.
These thick, coloured, A4-sized paper sheets were creased, but not folded. In their unfolded form, they were put in the museum's A4-holders, for the visitors to take away. Once taken out, the sheets could easily be folded into A5 booklets.

On one side of the A4 sheet we put the information. On the other side we put an image related to the workshops listed. (The images we used were made respectively by Mamabart, Studio Aandacht and Felieke van der Leest). We screened these images in such a way that they seemed to exist out of diagonal lines, resembling the diagonal lines of the SMCS logotype.
We used 'ton-sur-ton' colour combinations, to keep the folders together as a series. For the first folder we used a dark blue ink, printed on a light blue paper. The second was dark green on light green. The third was red on orange. The last one was brown on yellow (giving the folder a gold-like glow, referring to Metallic Yellow, a group show taking place at the museum around that time). 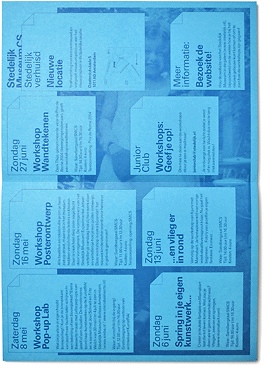 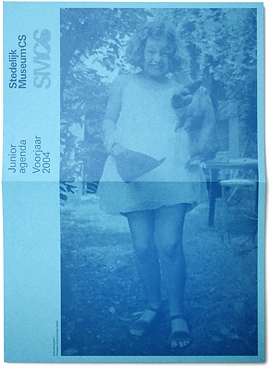 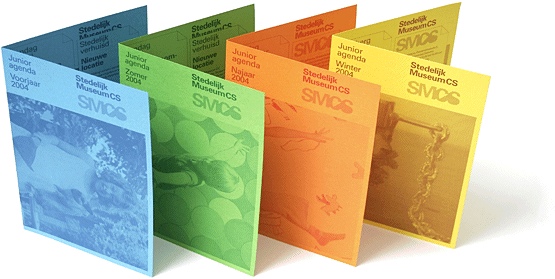 The CKV is a Dutch highschool program, an educational package most museums have to contribute to. The note blocks shown here are actually small workbooks, freely distributed in schools, or given to classes when they visit the museum.
These A6-sized workbooks were based on classic note blocks, but instead of the usual horizontally ruled paper, we tilted the grid a little bit, so that the lines became diagonal, resembling the diagonal lines in the SMCS logotype.

We made two different versions: one with a blue binding, and one with a red binding. 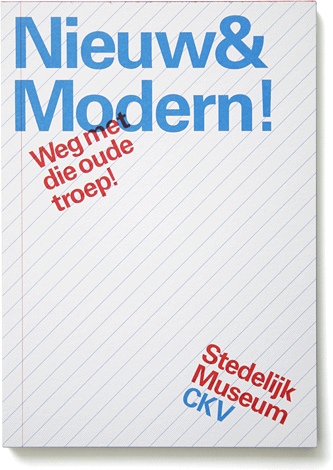 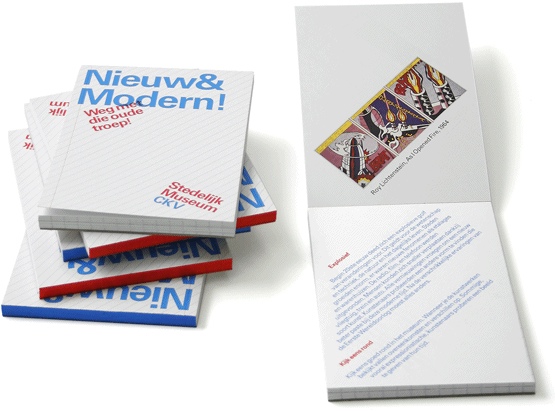 Shown below a simple souvenir shirt. All four variations of the SMCS logotype, printed white on black, on a 100% cotton Fruit of the Loom t-shirt. The pattern of parallel lines, combined with the black-and-whiteness of the print, gives this design an almost 'Dazzle Ship'-like aesthetic; or at least, that's what we hoped for. This shirt, as well the other shirts shown in this section, were designed for the SMCS museum shop. 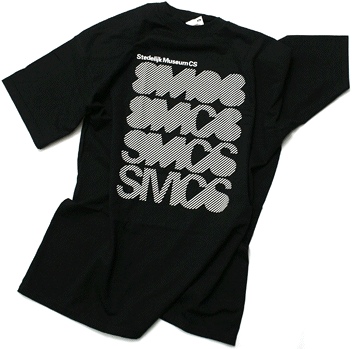 Then the alphabet shirt. The story behind this shirt is slightly complicated, but we'll try to keep it short. One of the first things we were asked to do for the SMCS, even before we did the logotype, was the design of this advertisement, a call to urge designers and artists to send in work for the annual Municipal Art Acquisitions exhibition. The theme of that year's exhibition would be graphic design. This exhibition would later be named 'Mark', but that was much later; when we were asked to design the advertisement, nothing was yet decided on, nothing except for the theme, graphic design.
Back in the studio, sitting behind our keyboards, one of the first things we did was to type in the alphabet in Univers. It was after all a typeface we had never worked with before. And after working mostly with Helvetica Neue for such a long time, working with Univers was quite a baroque experience.
So we typed in the alphabet, just to get accustomed to Univers, and before we knew it, we wrote down 'abcdefghijklmuseum' and 'nopqrstedelijk'. So we decided, since the theme of the exhibition would be graphic design, to use this alphabet for the advertisement.
Since everybody was quite enthusiastic about the advertisement, we decided to print the alphabet on a shirt. We know, it doesn't make sense at all on a shirt, in that light it's a weak concept, but we still like the design. Black on white, as type should be: 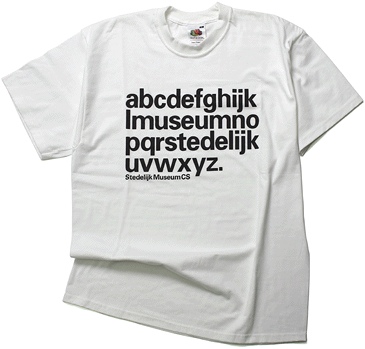 On the occasion of the exhibition Metallic Yellow, a group show on the subject of gold, we designed this limited edition shirt. It's basically the original SMCS logo shirt, but now printed in gold. And that's that. 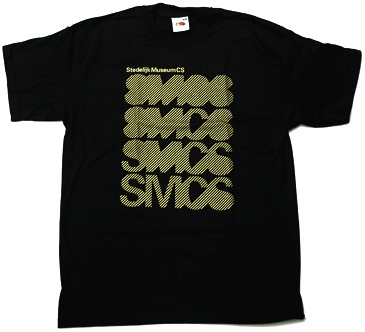 We also designed several buttons (diameter 25 mm) for SMCS. Like the shirts, these buttons could be purchased from the museum shop.
We basically designed three sorts of buttons. First, the typical logo buttons, showing the SMCS logotype in a variety of colours. Secondly, the typical slogan buttons. On these buttons we put a selection of 'acronisms', sentences which initial letters spell out SMCS. We used these sentences before, for the wall graphics we designed for the stairwell (see SMCS / Stairwell installation). Then we did a third series of buttons, showing an alternative SMCS logo while referring to classic designs, such as Milton Glaser's 'I Love NY' and Robert Indiana's 'LOVE' paintings, both slogan archetypes.

By the way, the list of printed matter, as shown in this section, is far from complete. We designed dozens of other items: press releases, advertisements, information sheets, tickets, a flag, even balloons. But for now we hope that this will do.