In February 2004 we were asked to contribute to an event organized by Mr. Motley, a Dutch art magazine for children. For this project, we designed a set of two button badges (diameter 25 mm each), to be handed out during the event.

In a great German book about buttons, with the appropriate title 'Buttons' (written by Michael Schroder, published by Galerie 70 and Frohlich & Kaufmann, Berlin 1983), there is a grainy black & white picture of a button that had intrigued us for quite some time. The button simply reads "Wearing badges is not enough" (which is in fact a line by Billy Bragg, from the song 'Days Like These': "wearing badges is not enough / in days like these").
For the Mr. Motley project, we decided to create a remake of this button, an exact replica of the original. But to keep it dialectically interesting, we also designed a button that said the opposite: "Wearing badges is enough": 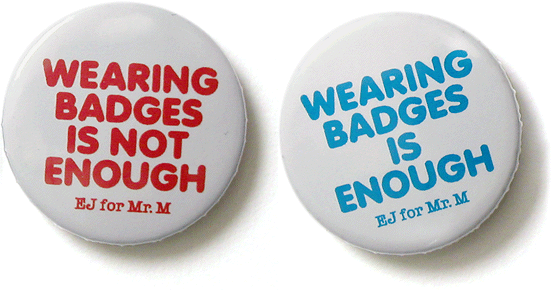 Since Mr. Motley is an art magazine for children, we thought this set of buttons would be a nice introduction to art. The two opposing slogans can almost be seen as a scale model of some of the more paradoxical relationships in art: between engagement and autonomy, theory and practice, activism and distance, etc. And besides, everybody loves a button.

next: No Poetry To Recite