VB62 was a performance/sculpture by artist Vanessa Beecroft, accompanied by a three-month exhibition. The performance took place on July 12, 2008, at the Maria dello Spasimo, a Gothic church in Palermo (Italy), while the exhibition took place at at the Galleria d'Arte Moderna Palermo, from July 17 to October 26, 2008.

Vanessa asked us to design the invitation. As we did with the invitation we designed for an earlier VB performance, VB60, our idea was to base our design on the choreography of the event. VB's performances often consist of large groups of models, situated in specific compositions. In the case of VB62, we took the composition she described in her plans, and turned it into an abstract, geometric invitation; which is very similar to what we did with VB60.

Vanessa's performances are quite theatrical. When you look at all the work we did for VB for the last two years (VB60, VB61, VBSS, VBRS, VBDP) you can see that our intention has always been to create abstract, non-theatrical counterpoints to her performances. The invitation we made for VB62 is a good example of that., As we already wrote, we referred, in our invitation, to the location of each model during the performance. 36 female nudes, lying down in a church, represented by 36 black bars. Shown here the A3 invitation, unfolded: 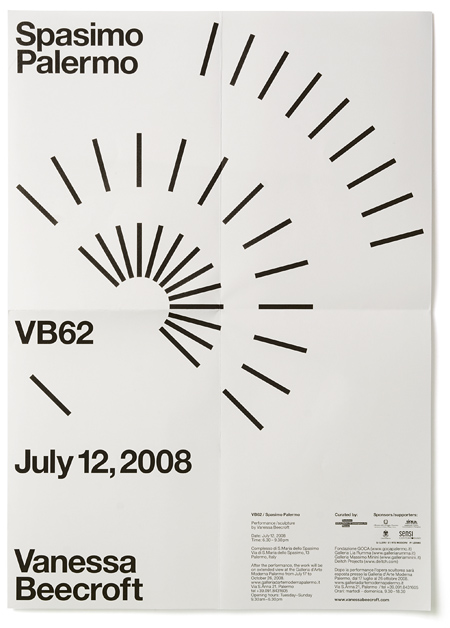 This invitation was folded to an A5 format, to be sent around in a clear, plastic A5-sized bag (again, very similar to the VB60 and VBRS invitations). Shown below the invitation in its folded form, front- and back: 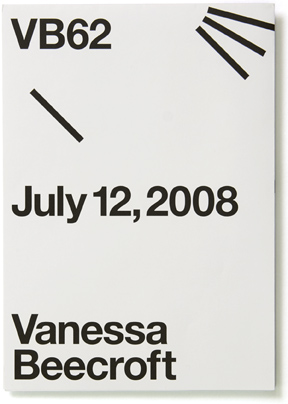 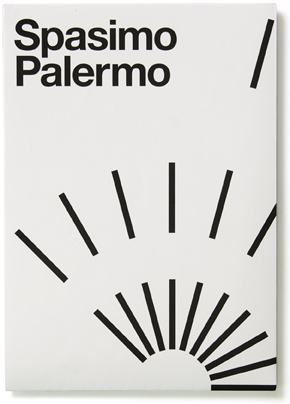 Next to this invitation, we were also asked to design a related advertisement for Art Forum (advert not shown here).

We also designed some typography for use on a 'totem', a display-like, three-sided construction that was situated near the church, to announce the performance. (This totem is not shown here, for the simple reason we haven't received photographs yet).

A couple of weeks after the event, we were asked to design a catalog; a small book that would document the VB62 performance. However, around that time, we were completely burnt-out from working on a particular French assignment (see 104 / Le Cent Quatre) so we just couldn't find the time and energy to work on such a catalog. That's when we introduced Vanessa to our friend Mark Owens (of Life of the Mind), and suggested that he should design the catalog, which is exactly what happened.