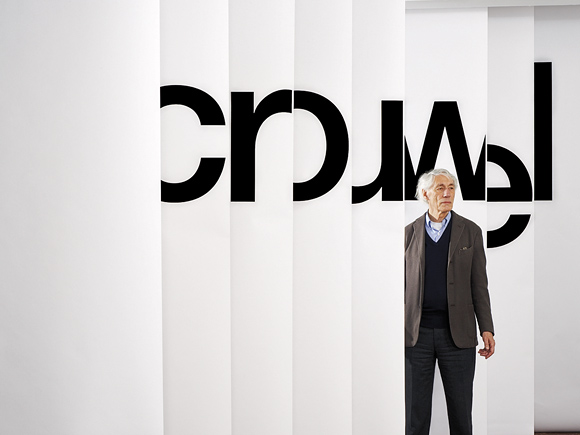 Towards the end of 2006, we were asked by Galerie Anatome, a small French exhibition space, to design the invitation and catalogue for a retrospective about the work of Wim Crouwel. The exhibition was called 'Architectures Typographiques' (which translates into 'Typographic Architectures'), it was curated by Catherine de Smet and Emmanuel Bérard, and would focus on Crouwel's typographic work created between 1956 and 1976.

It was Wim Crouwel himself who suggested to Anatome that we should design the invitation, so there was quite a bit of pressure on us. Crouwel is such an iconic figure; we couldn't afford to mess this up.
The difficulty was of course that, on the one hand, we wanted to invitation to clearly refer to the subject (Crouwel's work), but on the other hand, we didn't want to fall into the trap of designing an invitation "in the style of" Crouwel. That's why we thought of a photographic concept. (After all, photography is not which is not something we employ often; usually we try to solve everything in a purely typographic way).

Our starting point was this classic calendar, designed by Crouwel in 1963 for the Van Der Geer printing company: 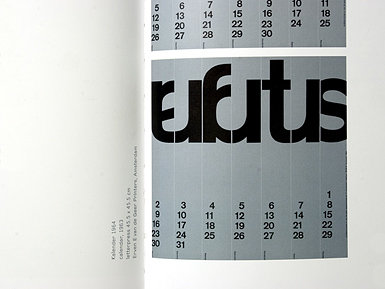 To refer to the title of the exhibition, 'Typographic Architectures', we decided to turn this calendar into an spatial environment, an actual piece of architecture. So we built, in our studio, this typographic setting, using long strips of paper hanging from the ceiling:

On a practical note, as can be seen on the last photograph above, we kept the most left strip of paper empty. We did this on purpose: we already anticipated that we would need that white strip to put text on, when we would transform the photo into a card. See the photograph of the actual card (a few paragraphs below) to see what we mean.

When the whole structure was built up, we invited Wim Crouwel in our studio, and photographed him in the setting. For these photographs, we worked together with Johannes Schwartz, a brilliant photographer we have collaborated with quite often (see High Noon, High Nature, High Light, High Rise, High Resolution and High Ideals). Shown below a selection of images from the photo shoot: 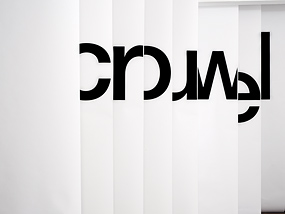 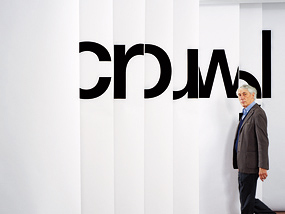 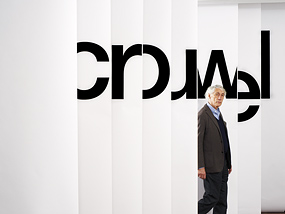 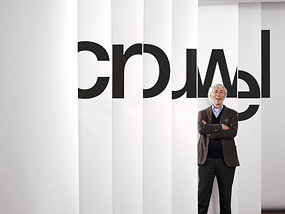 As you can see, Crouwel is standing in front of the letter 'W', referring to his first name, 'Wim'. But there was also a more pragmatic reason why the 'W' was the best letter to stand in front of. The strip containing the 'W' was simply the broadest strip of paper, because the 'W' is the widest letter of the bunch. So it was the perfect spot to pose.

We really love the image of Crouwel literally walking through these strips of paper, emphasizing the physical dimension of design. For us, this photograph has a lot in common with the slashed image of the RMN logo, a project we were working on around the same time. What we also like about the photograph is the whole modernist notion of 'man in a man-made environment'. The image of Crouwel, standing inside an environment referring to one of his own designs, seems to us a clear expression of this notion.

The actual invitation was an A5-sized card, printed on both sides. Shown below the front and back: 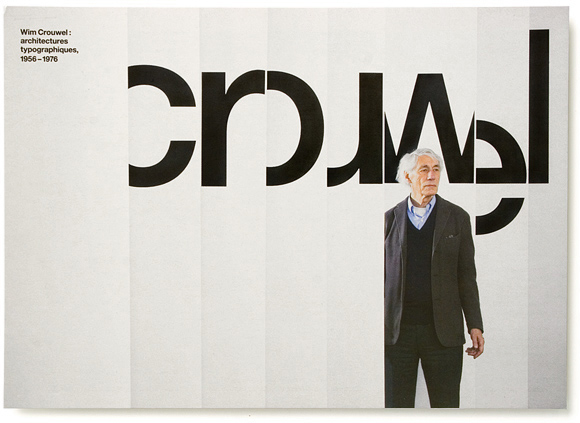 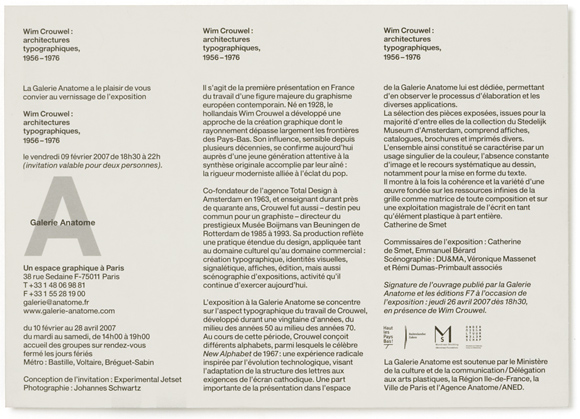 We were actually really unhappy about the way the card was printed; the quality was quite bad. Crouwel looks really pale on the card, while in reality he always looks healthy as can be. Since the card was printed in France, we couldn't control the quality. We usually try to let all our work be printed in Amsterdam, but unfortunately, this wasn't possible in the case of this card.
(When, a couple of months later, we were working on the accompanying catalog, we did try to correct the badly-printed card, by reprinting the photograph and insert it in the catalog as a loose-leaf card. More about that later).

After we designed the invitation, we were also asked to design the catalogue of the show, to be published by F7 (éditions fsept). The story about this publication can be read elsewhere on this website, at Typographic Architectures 2. In the meantime, here's already a photograph of the cover of the book: 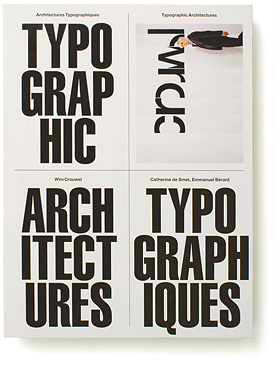 As we already explained, we were really unhappy with the quality of the actual invitation; the printing was really poor. So to compensate for that, we reprinted the card (in four different versions) and inserted these cards in the catalogue. The four variations were scattered over the catalogues randomly, one card per book. The four cards can be seen below: 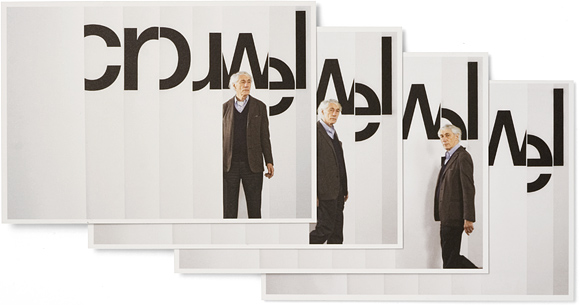