In the summer of 2006 we were approached by RMN to redesign their logo. Réunion des Musées Nationaux is a French organization, uniting 35 national museums. Founded in 1895, it's a very prestigious establishment, and one of the main cultural institutes in France.
The original logo was designed in 1969 by Adrian Frutiger; it was a black circle, containing a white letter M. In 1990, the text 'Réunion des Musées Nationaux' was added to the circle, by Jean Widmer. In this form, the logo was used until 2006.
The question RMN asked us was actually very simple: they wanted us to redesign their logo in such a way that the emphasis would be on the acronym 'RMN' (rather than on the single 'M', or on the full name, 'Réunion des Musées Nationaux').

The solution came to us very quickly. It was obvious to us that the original logo, the circled M, already contained, within itself, the two letters needed to complete the RMN acronym. So we cut the old logo in half, liberating the R and N, and placed them alongside the M, thus completing the full acronym.
Shown below are three images. On the left, the original logo, designed in 1969 by Frutiger. In the middle, we show the way we cut the logo, using a 66 degree slash. On the right, the new logo, showing the full acronym:

The old logo looked quite static, as the dynamism of the slanted M was completely neutralized by the circle. By adding the diagonal slashes, the logo becomes dynamic again: it suddenly gets a rhythm, a movement. The relationship between space and counterspace becomes more graphic, more specific.
Most importantly, the whole idea of a 'réunion' is suddenly emphasized, since the new logo makes it very clear that the letter M is in fact a 'réunion' of the letters R and N.

When designing this logo, we were thinking all the time about the role of slashing and cutting in art: Modernist collages, the cut buildings of Gordon Matta-Clark, but especially Lucio Fontana's 'slash series': monochrome paintings containing one or several cuts. What we find interesting about Fontana's work is the gesture of 'cutting through the image': the idea of making the world behind the painting visible. His slashing might be seen as a destructive act, but it's not; it's actually a constructive gesture, underlining the idea of the painting as a physical construction.
We've always been quite interested if this principle could be applied to the world of graphic design. In our own work, we certainly try to experiment with the idea. Through folding, perforating and cutting, we often try to emphasize the physical construction of printed matter (although in a dry, non-sculptural way). Fontana's work is a clear example of cutting as a constructive gesture, not a destructive one, and in that sense his work definitely inspired the design of the RMN logo.

Shown below a few A4 sheets, taken from our original presentation. As can be seen, in this proposal we showed the logo in several variations (different sizes, colours, etc.), and also showed the logo being applied to various situations (invitations, posters, etc.).
It's funny to think that the actual presentation took place in front of a committee that included Swiss/French design legend Jean Widmer, who redesigned the RMN logo earlier (in 1990). The other members of the committee were also quite renowned. (We were actually quite nervous; you would imagine that, the older you get, the less nervous you become about meetings and presentations, but it's actually the other way around. The older we get, the more unsure we are becoming about what we are actually doing). 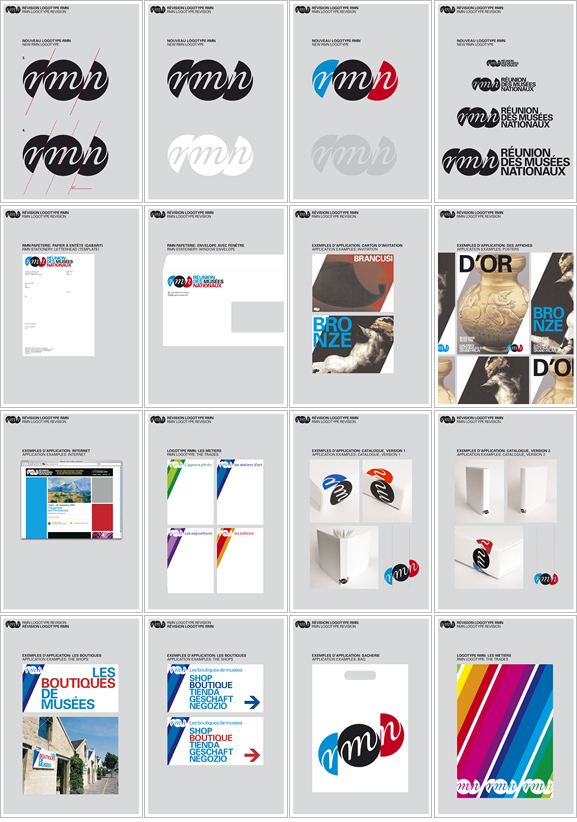 As can be seen in our first sketches (shown above), in the beginning we were still playing with the idea of applying colour to the logo. However, after a few meetings with RMN, we decided to stick to our favorite combination, black and white. During those meetings, we discovered that a large part of the stationery (forms, letterheads, etc.) would be for in-house use only, and would be laser-printed by the employees of RMN themselves, rather than offset-printed by a professional printer. Which is a situation we'd never heard of: in the Netherlands, even the smallest companies/institutes would rather invest in high-quality offset-printed stationery than to have to print it out themselves. But we noticed right then (and also later, when working on other French assignments) that the situation is France is totally different.

So after we established the fact that a lot of the stationery would be laser-printed, we decided to keep the whole identity system black and white. Using colours or greytones would only lead to inconsistency when printing on different sorts of inkjet- and laser-printers. And as we already wrote, black and white is our favourite combination anyway.

Shown below is the logo system we eventually came up with. The logo, in black and white, applied to various 'branches' of RMN:

As can be seen, the typeface we used for these applications is Univers, designed by Adrian Frutiger, who also designed the original RMN logo. In our graphic manual, we refer to Univers as the 'institutional layer'. For the 'subjective layer', which is the text written by employees of RMN (the 'body text' of the documents), we suggested to use the typeface Courier New, a version of Courier redrawn by Adrian Frutiger for the IBM Selectric typewriter series. In other words, on any document sent out by RMN, all three typefaces (the lettering of the logo, the 'institutional typeface' in the letterhead, the 'subjective typeface' in the body text) are in fact designed by Frutiger. We thought that such a formal and conceptual relationship would add to the inner-logic of the overall graphic identity.

Shown below a small selection of the stationery that we designed for RMN: 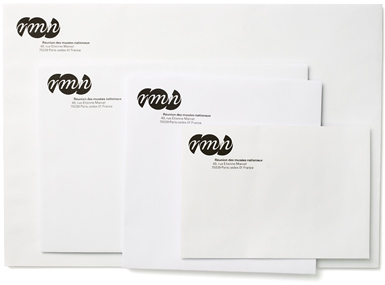 The actual graphic manual ('charte graphique') of RMN was an A2-sized poster, folded to an A4-sized booklet. Printed on both sides, this manual was distributed to all RMN employees. Shown below is the manual in its folded form (as a booklet), and in its unfolded form (as a poster). 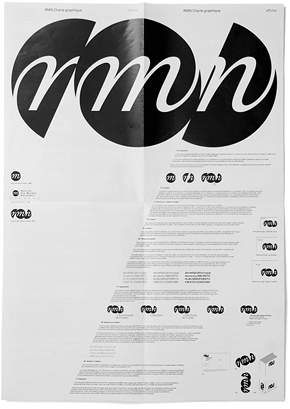 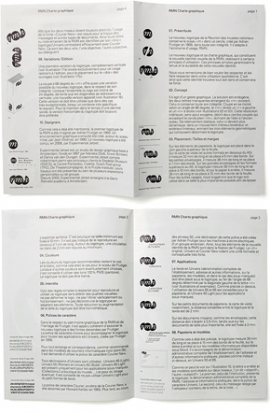 We also designed a New Year card. It's funny, while the approval of the logo itself went really smooth, without any concessions at all, the process of getting the card finished proved to be much more difficult. For some reason, the whole office wants to have a say in a New Year card. We have noticed this before, in earlier assignments: when the main part of an assignment is approved immediately, the design of a relatively unimportant by-product suddenly becomes a struggle. It's a very strange phenomenon. Anyway, the card turned out to be okay, maybe a bit too over-laminated for our taste, but that's the sort of concessions you sometimes have to deal with. Shown below is the card. An A4-sized cardboard sheet, printed on both sides, folded to an A5-sized card. Black and silver ink, and spot varnish, on a white background. One side matte, one side glossy, with a hole perforated in the front.

For the design of the card, we were inspired by so-called 'lunar' calendars, calendars showing the cycles of the moon phase. We thought that such a reference would be fitting for a New Year card. Also, we wanted to show the redesigned RMN logo as a 'new moon rising'. In its closed form, the card shows the old RMN logo. When the card is opened, the new RMN logo reveals itself. Shown below the front-, back- and inside of the card: 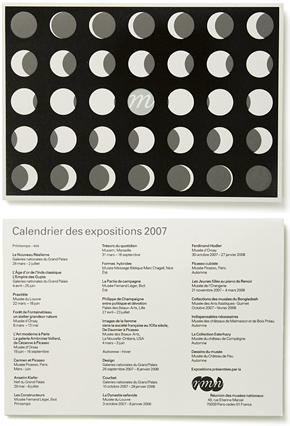 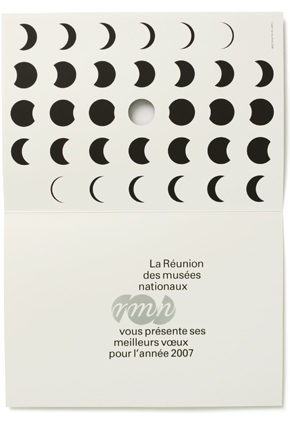 As an introduction of the new RMN logo, we also designed a so-called 'kakemono', a backdrop that was displayed in the window of the RMN headquarters. Shown below a snapshot of the installation: 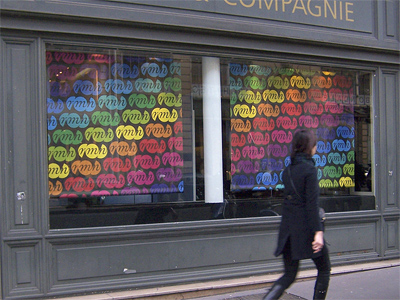 Finally, a picture of a small brochure we designed for RMN. Basically an A3-sized sheet, folded to an A5-sided booklet. Printed on both sides, the four pages of the booklet contain general information about RMN, while the back shows pattern we designed earlier for the 'kakemono': 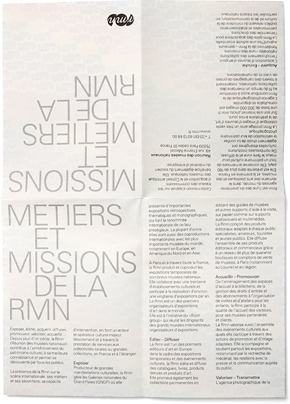 We like to conclude by saying that we are really glad how this whole assignment turned out. We are still very happy with the logo, especially when we see it displayed proudly on www.rmn.fr (website designed by Vier5), or on the bags distributed by the museum shops, or on the many affiches that we see hanging in the metro stations every time we visit Paris.
[Update 2013: Due to a merger with other cultural institutions, RMN recently redesigned thier logo. Their website has changed as well.]

We would like to mention Christine Krätke-Plard (Alias), who translated the original briefing to us. But most of all, we want to thank Françoise Pams (RMN), and especially Stéphanie Hussonnois-Bouhayati (RMN), for the fabulous collaboration. It was a great project to be involved in.

The original French graphic manual ('charte graphique') can be downloaded (as a low-res PDF) below.