'Changing Ideals' was in many ways a typical NAiM project, in the sense that the exhibition design was done by EventArchitecture, after which we came up with a graphic intervention (the layer of typography and pictures in the exhibition). This model always worked particularly well. While EventArchitecture concentrated on building their trademark wooden constructions, we tried to come up with context-specific ways to install prints in these constructions. In this particular case, we attached all the prints using LPC 'Double Clips' (our favourite brand of paper clips). 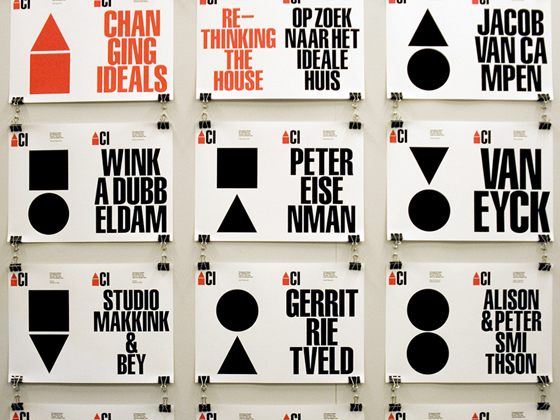 But before we move to the prints in the exhibition, let's first say something about the underlying concept. 'Changing Ideals' was an exhibition curated by Dirk van den Heuvel, presenting a series of 'case studies' of different architectural models. Among the explored concepts were buildings by Gerrit Rietveld, Peter Eisenman, Aldo van Eyck and Alison & Peter Smithson.
Thinking about this whole 'quest' for the perfect house, we, thought it would be an interesting idea to work with a sort of 'typology' of basic shapes (circles, triangles, squares), and show these shapes in different combinations, representing different models of housing and dwelling.

When it comes to exhibitions taking place in NAiM / Bureau Europa, we usually design two different sizes of posters: A0-sized (screenprinted) and A2-sized (offset-printed). These two sizes of posters are always designed as two slightly different variations (in other words, both posters are always different).
However, it seems that for 'Changing Ideals', it was decided that only a A0-sized poster was printed (probably a matter of budget). Shown below this A0-sized poster (screenprinted by Wyber Zeefdruk): 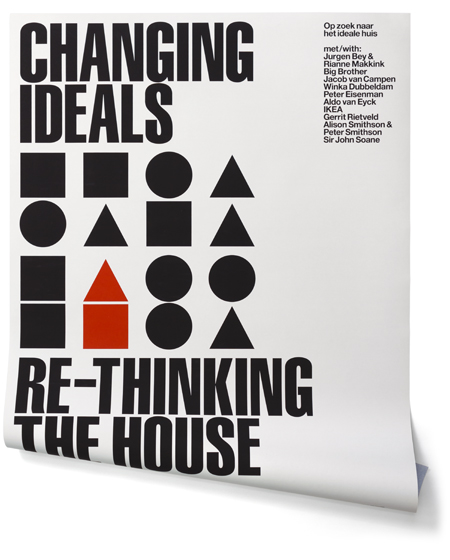 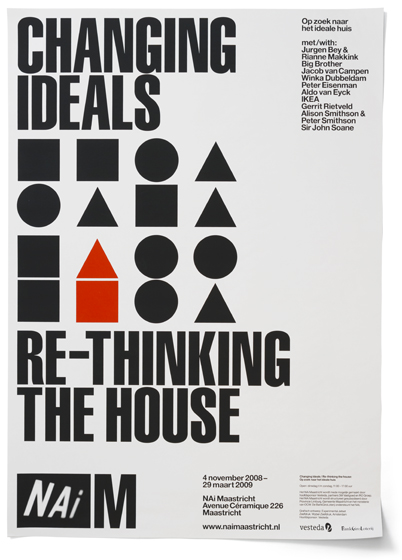 As usual, the invitation consisted of an A3-sized 'mini-poster' (offset-printed by Lenoirschuring), which was then folded to (and shipped as) an A5-sized brochure. Shown below this invitation, both in its folded (A5) and unfolded (A3) form: 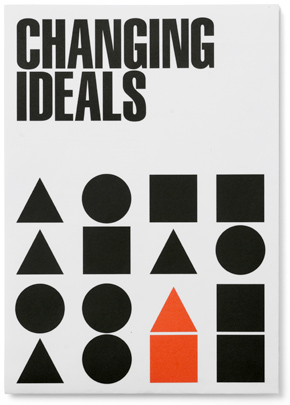 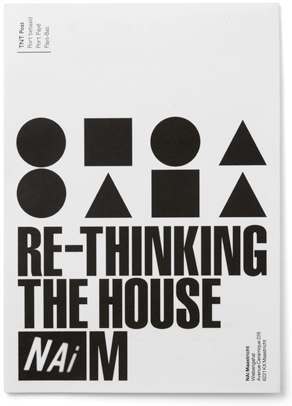 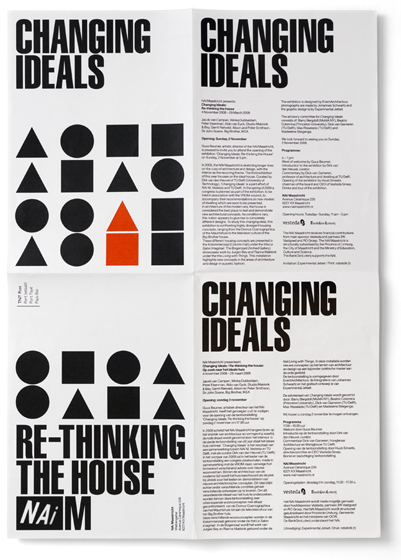 For the title wall, we gave every 'case study' its own combination of shapes, creating a full system of symbols: 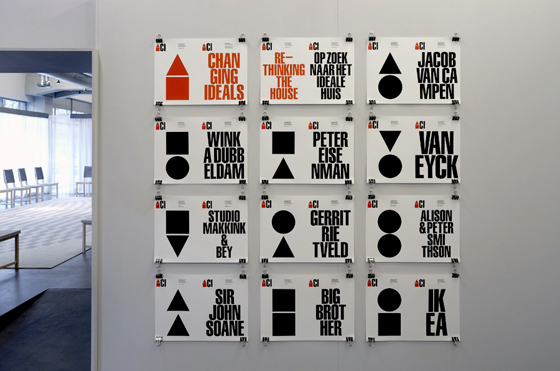 The spatial constructions, created by EventArchitecture, were abstract representations (or reinterpretations) of the floorplans of the 'case studies' – so the space was filled with wooden installations shaped in the most unexpected ways.

In, on, in front of and behind these constructions we then installed hundred of sheets (which we had printed out ourselves) – sometimes hanging in overlapping compositions, sometimes standing as little paper landscapes, etc. Here's a small selection of photographs (made by Johannes Schwartz), showing some of the paper compositions we created: 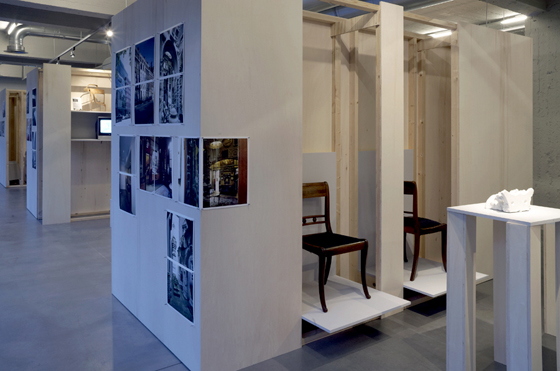 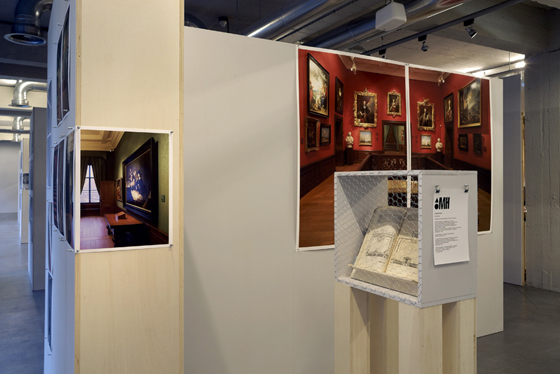 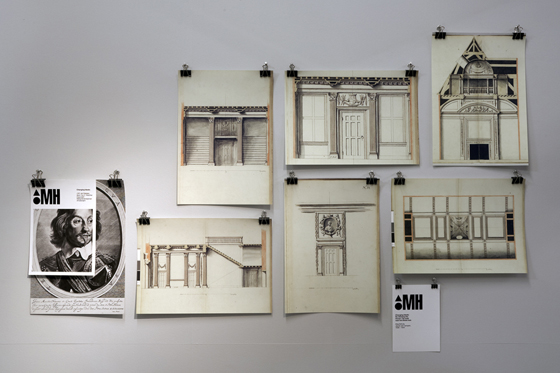 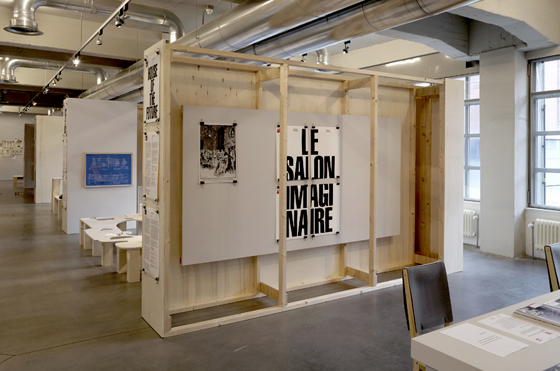 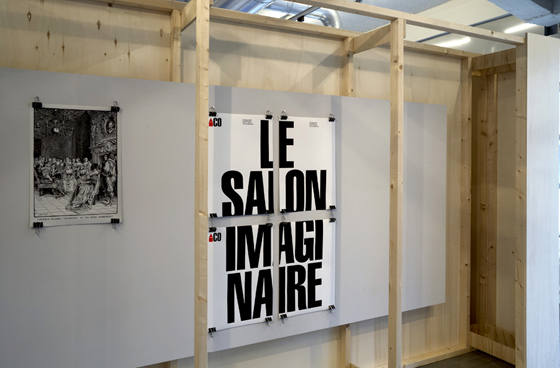 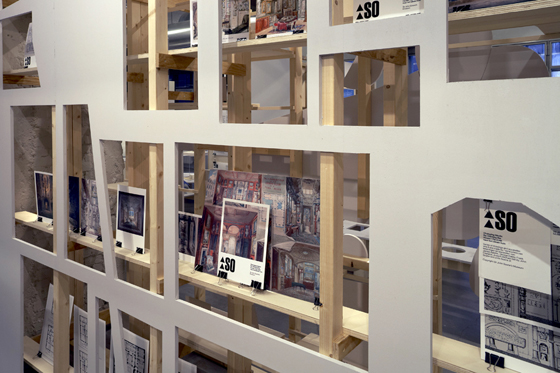 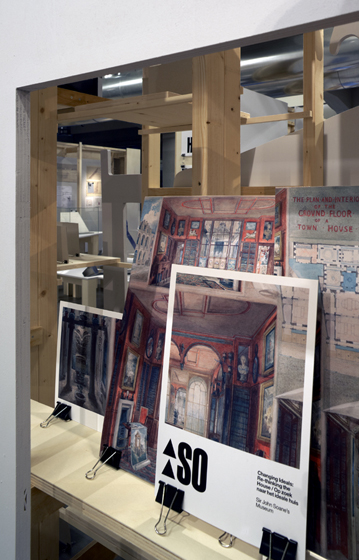 While 'Changing Ideals' took place in the main hall downstairs, there was also a side-exhibition happening in the hall upstairs – 'Living with Things', a presentations of objects created by product designers Makkink & Bey. For this event, we were asked to come up with some quick signs as well (not shown here).

'Changing Ideals: Re-thinking the House' took place between November 4, 2008, and April 30, 2009, at NAiM / Bureau Europa (at that time still known as NAi Maastricht); more information can be found here and here.

next: Design and Ideology