In the beginning of 2006, artist Miltos Manetas asked us to design a poster containing one of his manifestos. This poster would be hanging on the streets of Milan, during the exhibition that Miltos Manetas was curating at Galleria Pack in Milan, Italy. Running from March 15 to April 15, 2006, the exhibition was titled SuperNeen, named after Neen, one of Miltos' signature art movements. The manifesto Miltos asked us to use on the poster was called 'A Few Things I Know About Neen' (obviously referring to Godard's "Deux ou trois choses que je sais d'elle", a movie from 1967).

We liked this idea, of designing a poster that would serve as a manifesto, hanging in the streets of a city. We kept the design pretty simple, to let the poster really function as an announcement, as a wall newspaper.
We turned the bilinguality of the poster into the main pictorial element. By making the English text red and the Italian text blue, we tried to create a striking graphic contrast, while we also mixed the English title with the Italian title, creating an abstract wordplay that filled half of the poster.

We would have loved to show an actual photograph of the poster, but because the poster is huge (200 cm x 140 cm), we haven't managed to photograph it in our studio yet. But we will do soon.
Displayed below, a 'flat' digital image of the poster. (We hate to show our designs this way; we see our posters as objects, not as images. But for now, there is no other posibillity). 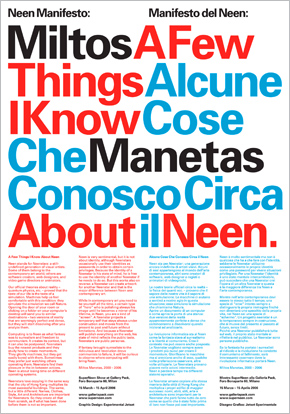 The poster also made an appearance in the SuperNeen exhibition itself: 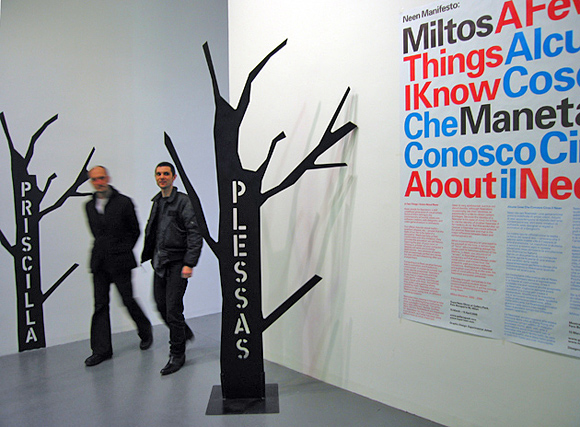 (Sculptures in the foreground by Andreas Angelidakis, photography as well).

Because of its size, it's a poster we often show in our own exhibitions; it's a guaranteed wall-filler. Shown below, the poster as it appeared in a solo exhibition we had in 2007 in The Narrows, an exhibition space in Melbourne. (Photography by either Jonathan Doncovio or Warren Taylor; and the person you see in the foreground is actually Gary Hustwit, director of the Helvetica documentary): 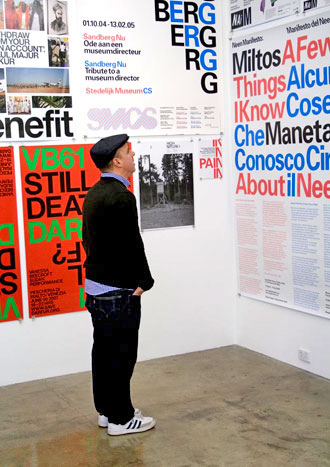 It's interesting, when we show the Neen Manifesto poster in our own exhibitions, people sometimes come up to us assuming that we wrote the manifesto, or at least agree with it, which is not necessarily the case. The fact that we turned Miltos' manifesto into a poster doesn't automatically mean we endorse every word of it. What we do endorse, however, is this whole spirit of posting manifestos and slogans in the street, and if we can help Miltos with that, we will be happy to do that. In other words: Miltos' message is contained in the literal meaning of this specific manifesto, while our own message is contained in the design of the poster, in supporting the general concept of the printed manifesto itself.

After the publication of this poster, we also adapted the manifesto as a spread for the book Neen, a book by Mitos Manetas, published by Edizioni Charta in 2006 (ISBN 88-8158-601-0). Spread not shown here.

Other projects we have done for Miltos Manetas include MM / Tirana, MM / MMMM, MM / 444 Theory and MM / Internet Paintings.