Not being big fans of Norman Rockwell, we were a bit hesitant when The Wolfsonian, a museum based in Miami, approached us to participate in 'Thought on Democracy', a poster exhibition revolving around a series of paintings that Rockwell created in 1943, based on Roosevelt's 'Four Freedoms' speech from 1941. (The freedoms addressed in that speech were 'freedom of speech', 'freedom of religion', 'freedom from want', and 'freedom from fear').
In short, The Wolfsonian asked a group of artists (including us) to design a poster referring to the theme of 'Thoughts on Democracy'. (In the exact words of the museum, "the exhibition will comprise of posters created by sixty leading contemporary artists and designers, invited by The Wolfsonian to create a new graphic design inspired by American illustrator Norman Rockwell's 'Four Freedoms', which were recently gifted to the museum by Leonard A. Lauder").

The reason we eventually decided to join the exhibition had a lot to do with the fact that it was Wim Crouwel who invited us to participate, which made it hard to refuse. Also, the crew at The Wolfsonian sounded really enthusiastic, so we decided to give it a try. Shown here the poster we came up with: 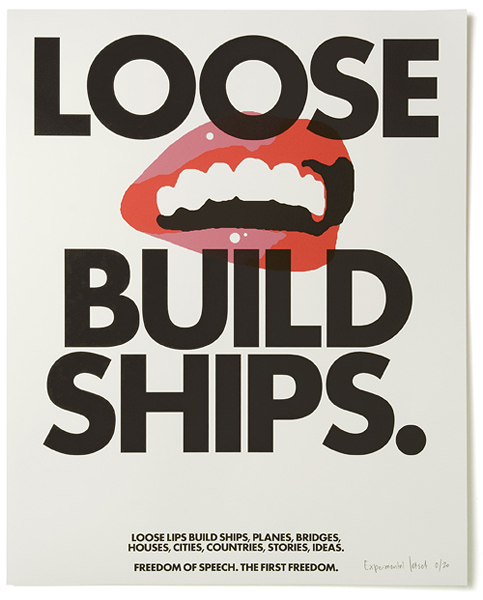 As we already confessed, we didn't really like Rockwell's original posters, and we were initially thinking about creating a poster that would question this whole American notion of freedom, for example by referring to Naom Chomsky's 'Fifth Freedom'. That was our first impulse.
But at the same time, we didn't want to come across as being cynical about freedom. We felt we had to take into consideration people like Wim Crouwel, the generation that lived through the Second World War, people for who this whole American notion of freedom really meant something.
More importantly, we realized that what made us wary of Rockwell's posters was not so much the notion of freedom, but more the notion of propaganda. So we decided to make a poster about propaganda instead.

The slogan "Loose Lips Build Ships" is a collision of two iconic WWII posters: the 'Freedom of Speech' poster as painted by Rockwell, and the 'Loose Lips May Sink Ships' poster, which was the US Office of War Information's attempt to limit the possibility of people inadvertently giving useful information to enemy spies.
'Loose Lips Build Ships' is a contradiction of 'Loose Lips Sink Ships', but at the same time an affirmation of 'Freedom of Speech'. By creating a slight friction between these two iconic slogans, we wanted to show our uneasiness with the whole concept of propaganda.

We originally designed a completely typographic poster, just bearing the slogan "Loose Lips Build Ships". At the last moment, we decided to replace the word 'Lips' with an actual image of lips. We thought the image of the lips fitted quite well with the idea of speaking, with the theme of freedom of speech. But we still aren't exactly sure if we made the right decision here. Maybe the concept, of two clashing slogans, would have been clearer if executed purely typographical. Anyway. It's too late for that now.

The poster, 16 x 20 inch, was exhibited at The Wolfsonian between July 5 and December 7, 2008. Thanks to Cathy Leff, Donna Carter and Tim Hossler of The Wolfsonian.