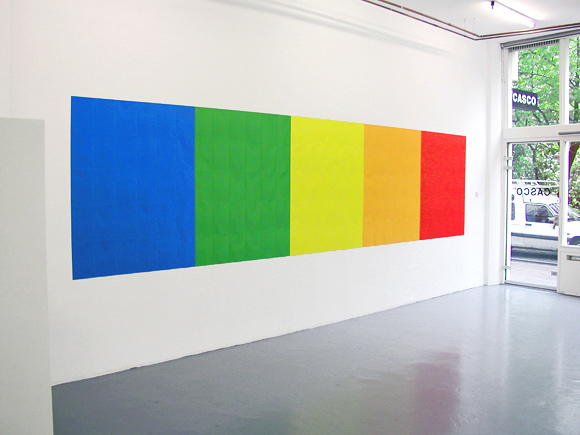 In the spring of 2002, we created the installation ‘Kelly 1:1’ for Casco, a really interesting exhibition space in Utrecht. The piece was on display from May 12 to June 8, 2002. The following fragment is the short press release that was put out by Casco around that time:

Earlier this year, Experimental Jetset were invited by Casco Projects to create a site-specific installation. In order to ‘fold the notion of art back into itself’, Experimental Jetset decided to transform Casco Projects into an archetypical ‘white cube' exhibition space (which is not an obvious thing to do, as Casco Projects rarely functions as an exhibition space; it usually functions as a starting point for social art performances that take place elsewhere in the city of Utrecht). This concept (transforming Casco into a ‘white cube’) was realized by carefully abstracting the idea of an exhibition into the three main ingredients: the work, the title and the catalog.
The work exists of an actual-size reproduction of Ellsworth Kelly’s 1966 painting ‘Blue, Green, Yellow, Orange, Red’. On the wall, the huge painting (almost 6 x 1,5 meters) is translated into 150 A4-sized pieces of coloured paper, attached to the wall with grid-like precision.
The catalog consists of the same 150 A4-sized pages, bound as a paperback publication. In other words, the publication is a scale 1:1 version of the work on the wall. And since the title (Kelly 1:1) exactly describes the work, all the three elements (work, title and catalog) can be seen as scale 1:1 models of each other.
The choice of the original Ellsworth Kelly painting should not be mistaken as cynicism or postmodern irony. It should be seen as a tribute or homage instead. And since it is a homage in the same spirit rockbands cover other bands’ songs, the installation’s subtitle is ‘A cover version by Experimental Jetset’.
The original painting is an almost archetypical artwork: a monumental panorama, consisting of nothing but colour and light. And since the plan was to turn Casco Projects into an archetypical exhibition space, Experimental Jetset decided this was the best painting to remake.
EJ: ‘We don't see the subject of this project as a representation of reality; To paraphrase Godard, it's more about the opposite: the reality of representation’.

In other words, in the work we tried to clarify (if only to ourselves) the relationship between the work, the catalog and the title, by bringing these elements together in a (conceptual) equilateral triangle.
Shown above, at the top of this page, the work: 150 A4-sized sheets of coloured paper, mimicking an Ellsworth Kelly painting. (These A4 sheets were actually offset-printed for this very purpose).

On the opposite wall (the wall facing the work), we put the title of the installation, using type in the same dimensions as the work. We thought this would be an interesting gesture: a title as large as the work itself: 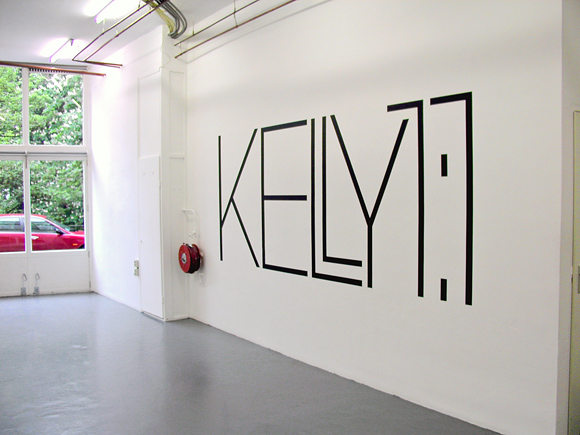 In the back of the space, we placed a simple bookcase, functioning as a third wall. In this bookcase we stacked copies of the ‘Kelly 1:1’ catalog: 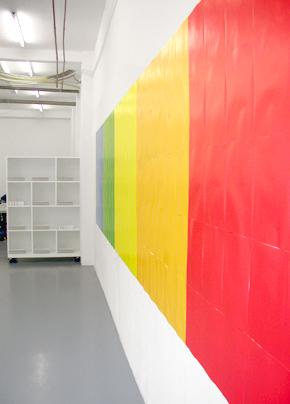 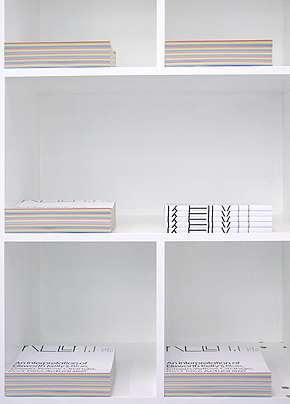 As we already wrote, this catalog consisted of the same 150 pages as shown on the wall, but now bound as a paperback book.
We thought this would raise some interesting questions. Since the work on the wall consists of the same 150 sheets contained in the book, is the catalog still just a representation of the work on the wall, or is it now equal to the work? What is the original, and what is the copy? Can a reproduction possess an ‘aura’ as well? All questions that keep us occupied constantly.

Shown below the front and back of the book. The book is A4-sized, counts 150 pages, and was published in an edition of 250.
The cover was a white sheet, printed with black and silver. (As a matter of fact, extra copies of the cover were printed and left unfolded, so that they could function as A3-sized posters). 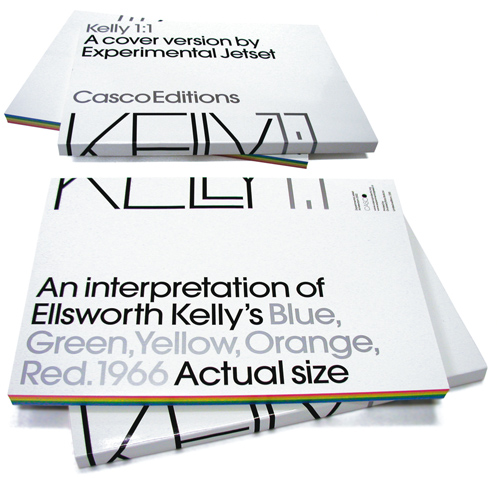 We also designed a very basic invitation. It was for this invitation that we turned the title ‘Kelly 1:1’ almost in a logo. We didn't want to give away the subject of the exhibition (Ellsworth Kelly) immediately, and we thought that, by turning the title into a more pictorial image, we would disguise the actual meaning of the word ‘Kelly’. That's why it looked like a logo.
Shown below the invitation (front and back), basically a piece of cardboard, 240 x 100 mm, printed with black and silver:

Although the installation was meant to be site-specific, the work has later been exhibited in various other places: during the summer of 2002, in the window of Amsterdam bookstore Athenaeum; in October 2002, at the Palazzo Fortuny in Venice (Italy); in the beginning of 2003, at the Commonwealth Gallery in Richmond, Virginia (US); and in the beginning of 2005, at an exhibition about geometric painting (hard edge, colourfield, op-art, etc.) in Melbourne (Australia). After all, it's quite a light-weight installation: easy to ship and easy to install. Shipping the work by Fed-Ex, it almost feels like a piece of mail-art.

The catalog has had a very interesting afterlife as well. Although a part of the edition was ruined (during an exhibition later that year, a car crashed into Casco, hitting some boxes filled with Kelly 1:1 catalogs, as well as seriously injuring an assistant), the book did sell quite well through art book stores such as Printed Matter (NYC). In fact, in the beginning of 2003 we were informed by the curator of Printed Matter that Ellsworth Kelly himself ordered five copies of the book.

We would like to thank Lisette Smits, then curator of Casco, for inviting us. She has been a great supporter of our work for many years now; we really appreciate her encouragement. We would also like to thank the rest of the crew at Casco.

A4 sheets, catalog and invitation printed by Drukkerij robstolk (r).