High Light is the third installment in an ongoing series of collaborations with photographer Johannes Schwartz. To know more about the series as a whole, also take a look at High Noon (2003) and High Nature (2004).

High Light was published on the occasion of Principle Junk, an exhibition that took place in February 2005 at art space PAKT (Amsterdam), in cooperation with architect Herman Verkerk.
The series of photographs handed over to us by Johannes were in many ways a continuation of the High Nature photographs, also featuring a theme loosely revolving around the conflict between nature and culture. Basically, it was a large collection of photographs of thrown-away christmas trees, photographed as they were laying flat in the streets, their wooden cross-like pedestals sticking in the air.
This collection of photographs was already perfect as it was, so we decided to simply classify the photographs, in an almost typographical way, while at the same time using the formats we used before for High Noon and High Nature.

The publication is basically a booklet of 24 x 33 cm, which unfolds to a double-sided poster of 48 x 66 cm. Shown below the front of the booklet in its folded form: 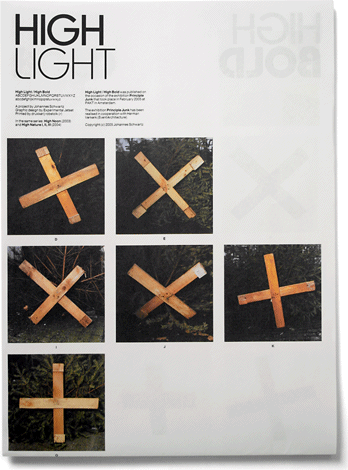 Unfolded, the booklet turns into a double-sided poster. On the frontside this poster (shown below, left), we placed the photographs of the christmas trees, printed in full-colour. On the back of the poster (shown below, right), we placed a series of typographic crosses, black abstract forms resembling the wooden pedestals shown on the front side. The full-colour photographs shine slightly through the other side of the paper, in such a way that they form very light grey boxes, in which the black crosses stand: 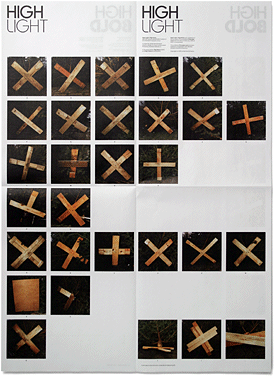 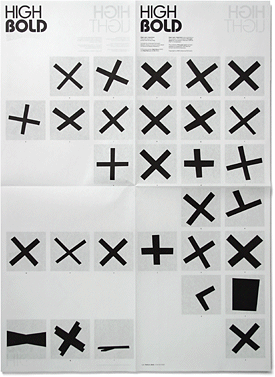 In the the booklet, we placed a cardboard insert (24 x 33 cm), featuring a photograph of a grid-like fence. Again a typographical reference. Shown below the card, front and back:

We named the frontside of the poster High Light, the back High Bold, and the insert High Medium. Typographical references again.

A small part of the edition was folded in such a way that the High Bold title is facing forward (not shown here).