High Rise was another installment in a series of publications we created together with photographer Johannes Schwartz, starting in 2003 with the publication of High Noon. The plan behind the series is pretty basic: every time Johannes is participating in an exhibition, he publishes another issue, and asks us to design it. (These issues never contain material featured in the exhibition itself; the idea has always been that these issues would show other material. In a way, the publication serves as an extra wall, added to the exhibition).
Since 2003, the following issues have been published: High Noon (2003), High Nature (2004), High Light (2005), High Rise (shown here), High Resolution (2007) and High Ideals (2008).

High Rise was published on the occasion of 'Now and Again', a group exhibition that took place in October 2005 at Pastoe, Utrecht. (As a matter of fact, we were participants in that exhibition at well; see Kelly 1:2).
The idea behind High Rise was pretty straight-forward: Johannes was invited by exhibition space Marres (Maastricht) to make photographs of the ruins of the Dutch Pavilion in Hanover (a pavilion built by MVRDV for Expo 2000).
After he made these photographs, Johannes asked us to turn these photographs in a publication. He also asked Irish philosopher Patrick Healy to contribute an essay on the theme of ruins.

Part of the fun when designing these publications is to come up with new ways of folding. The whole High series always has the same dimensions, 330 x 240 mm, but every issue is folded in a different way: for example, High Noon was a simple booklet, High Nature consisted of a whole collection of folded items, while High Ideals was a folded poster. For High Rise, we wanted to try yet another system of folding.

After we thought up the title, High Rise, we decided it would make sense to turn the publication literally into a 'tower' of images. That's why we came up with the idea of a long strip of paper, 330 x 960 mm (to be folded back to the 330 x 240 mm format). On one side of the sheet, we stacked the images vertically; while on the other side of the sheet, we placed the text (the essay by Patrick Healy) horizontally. Shown below the two sides (in their unfolded form, so 330 x 960 mm each):

In its folded form, this long strip of paper turned into a 330 x 240 mm booklet. We placed the essay facing outward, to hide the photographs on the inside; we thought it would be interesting that this particular issue of High would have a very textual appearance (unlike the other issues of High). Shown below the front and back of High Rise, in its folded form: 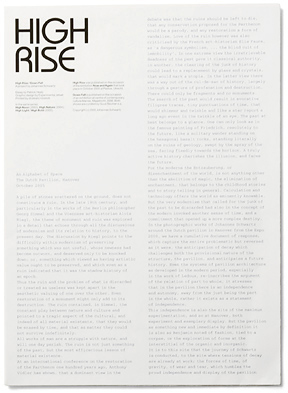 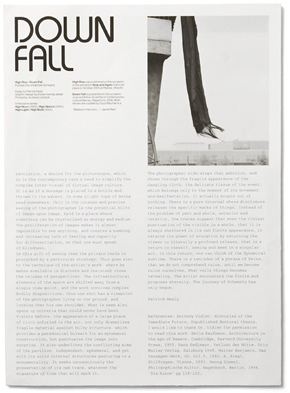 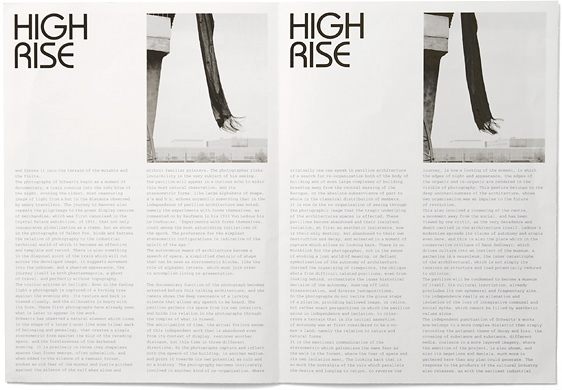 The theme of ruins might appear to be very 'anti-modernist', as it refers to notions such as antiquity, decay, etc., concepts that seem (at first sight) antithetical to modernism. In our own view, however, the ruin is a modern concept. After all, ruins show the very essence of buildings. Ruins reveal the underlying constructions, the hidden structures. And this concept, of transparency, of making the viewer aware of underlying structures, can be seen as a characteristic of modernism indeed. See also Stair/Stare.