High Resolution is the latest installment in a series of publications we created together with photographer Johannes Schwartz, starting in 2003 with the publication of High Noon. The plan behind the series is pretty basic: every time Johannes has an exhibition, he publishes another issue, and asks us to design it. These issues never contain material featured in the exhibition itself; the idea is always that these issues show other material. In a way, the publication serves as an extra wall, added to the exhibition.
Since 2003, the following issues have been published: High Noon (2003), High Nature (2004), High Light (2005), High Rise (2005), High Resolution (shown here) and High Ideals (2008).

The story behind High Resolution is as follows. In 2007, Johannes Schwartz was awarded a prestigious art prize, the Cobra Kunstprijs Amstelveen, and on the occasion of this award, he was offered to exhibit his work at the Cobra Museum of Modern Art (Amstelveen). This solo exhibition was named Paintbox, and took place between 24 November, 2007, and 12 January, 2008. In conjunction with the exhibition Paintbox, Johannes asked us to design a new publication for him – which became High Resolution.

Almost all of Johannes' work revolves around the theme of reproduction. For High Resolution, he gave us two series of photographs to work with: a series consisting of photos showing wrapped statues, and a series showing painters' palettes. Both series were photographed in ateliers in China.
Our idea was to come up with one publication that could show both series as two clearly separately stories. So we needed to design a publication that would have two points of entry, so to speak.
Part of the fun when designing these publications is to come up with new ways of folding. The whole High series always has the same dimension, 330 x 240 mm, but every issue is folded in a different way: for example, High Noon was a simple booklet, High Rise a long paper strip, and High Ideals a folded poster. For High Resolution, we wanted to try yet another system of folding. 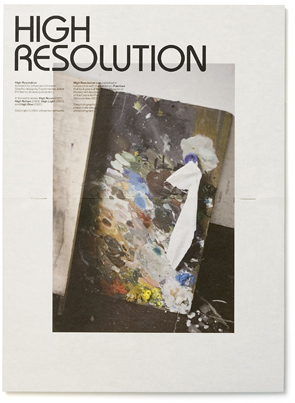 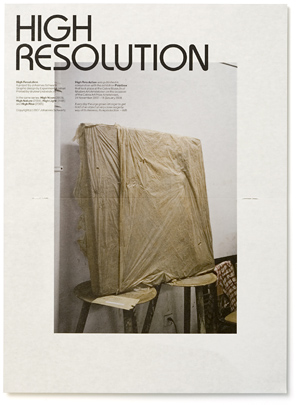 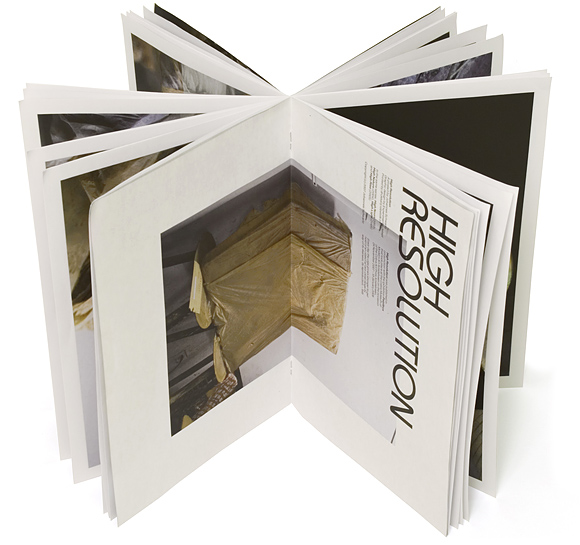 Followed by some pictures of actual spreads: 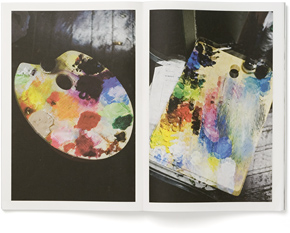 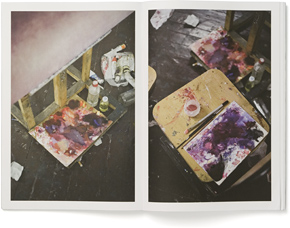 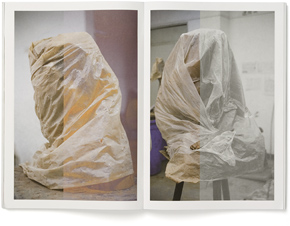 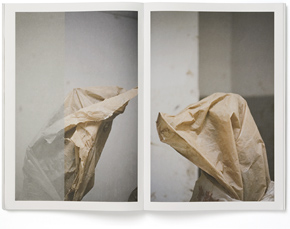 For Paintbox, we also constructed a very simple wooden piece of furniture (not shown here), a little cabinet made especially to hold a stack of High Resolutions, both to display and to dispense. The publication was free to take-away during the exhibition.

next: Forms of Inquiry