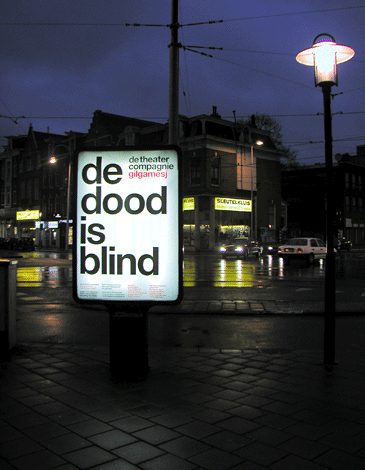 Towards the end of 2004 we were asked by De Theatercompagnie, an Amsterdam theatre group (formerly known as De Trust) to design their whole graphic identity. Coming straight out of the Stedelijk Museum CS (SMCS) assignment, which was quite a draining experience, we decided to develop the identity for De Theatercompagnie in a few successive steps, rather than to design everything at once. That's why we focused foremost on the graphic design of the posters for De Theatercompagnie's first play of 2005, an adaptation of the epic piece Gilgamesj. Our plan was to finish the rest of the graphic identity later in 2005.

Our main concept was to concentrate fully on the textual dimension of De Theatercompagnie's approach towards theatre. We felt that the pictorial, more dramatic side of De Theatercompagnie was already apparent in the plays themselves. We wanted the posters to add another layer to the plays, rather than to compete with the play's imagery. That's why we decided to keep the posters consistently typographic, based on quotes taken from the plays. Quotes that don't actually have to represent the play in a too symbolic way; we're rather looking for quotes that work well within the specific context of a poster. Seen in this light, the selection of the quotes was actually the most important part of the design.
Added to this main concept, we also came up with the idea of having two posters for each play; each poster showing a different quote, in such a way that it seems as if the two posters were almost in dialogue with each other. In that sense, the set of posters really worked as a miniature theatre play in itself.

The first set of posters we made in such a way were for Gilgamesj, a play about mortality and immortality. Shown below are two A2-sized posters, printed in red and black. The first poster reads 'Death is blind' (or 'The death is blind'), while the second reads 'Just as blind as we are'. We chose these quotes because they really work as slogans, referring quite directly to the social and political dimensions of the poster as a medium.

To make these two posters easier to distribute, we printed them on both sides of the same sheet of paper. 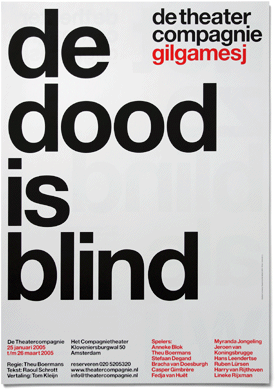 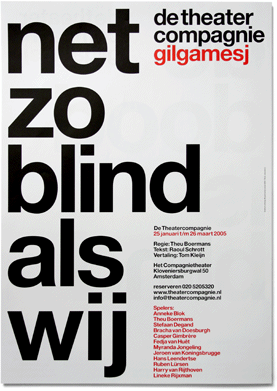 (To stress the fact that these are quotes, phrases taken out of a larger text, we decided to set the quotes in lowercase type. This to suggest that these are details rather than complete sentences).
Shown below is the outdoor version of the poster (size 116 x 171 cm) as displayed in the streets of Amsterdam, installed in a typical Decaux showcase (also known as MUPI). For financial reasons, we used only one of the quotes ('Death is blind') on these outdoor posters; there wasn't enough budget to print both different versions. 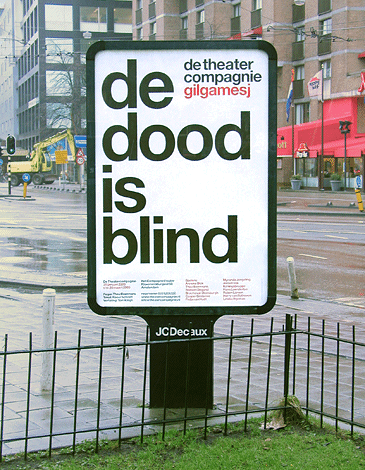 Shown below a simple brochure we designed for De Theatercompagnie. Using the folding technique we used a few months before (for the design of a SMCS brochure) this brochure for Gilgamesj is basically a two-sided A2 poster, folded to an A5 booklet.
While one side of the A2-sized sheet shows all information, to be read as separate pages, the other side is a typographic poster, displaying the name of the play (Gilgamesj), the name of the theatre group (De Theatercompagnie), and the two quotes (Death is blind / Just as blind as we are).
The brochure (front) in its folded A5 form: 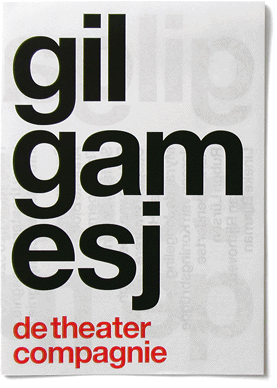 Partly unfolded, this booklet turns into a strip of paper of 594 x 201 mm. Shown below both sides of this strip:

Completely unfolded, the booklet turns into a A2-sized poster: 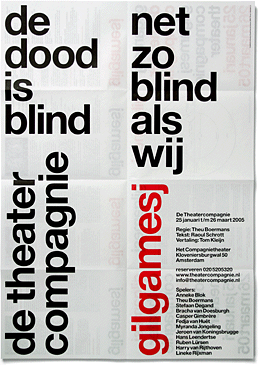 Shown below a later version of the Gilgamesj brochure, containing slightly more text. Folded in the same way as the earlier brochure, this is also a double-sided A2 poster, folded to an A5 booklet. Information on one side (to be read as separate pages), a typographic composition on the other side (to be used as a poster).

The folded A5 folder (front): 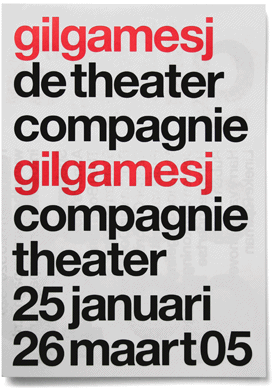 The brochure, partly unfolded (front and back):

Completely unfolded, the brochure turns into an A2 poster identical to the first brochure (see above).
Between the end of 2004 and the beginning of 2008, we have designed the posters and brochures for nine theatre productions by De Theatercompagnie: Gilgamesj, The Pillowman, Driekoningenavond, De Vrouw van Vroeger, Het Koude Kind, Peanuts, Ajax, Het Wijde Land and De Wilde Eend.

We would like to thank Thomas Smit, for inviting us, his trust and his support throughout the years. We would also like to thank Celine Bosman, Irene Koot and Maaike van Rijn.