In 2018, we were invited by Yasmil Raymond, Associate Curator in the Department of Painting and Sculpture of the Museum of Modern Art, to create a mural for the walls of Café 2. This intervention would be part of a series of site-specific installations, commissioned to coincide with the re-opening of the newly expanded MoMA in October 2019. Appearing in some of the museum’s transitory spaces and restaurants, the series would consist of work by Kerstin Brätsch, Goshka Macuga, Yoko Ono, Philippe Parreno, Haim Steinbach – and ourselves.

When considering Café 2, the first thing that struck us was its facade, clearly visible from the inside. We decided to take the windows of the facade, and project those windows directly onto the wall. A spatial intervention, creating the impression of an extended facade, adding windows to a wall where there simply can’t be windows. We immediately understood the implications of such a gesture: by mirroring the windows of the facade, we were basically reflecting (and thus, reflecting on) Philip Johnson’s legacy within the MoMA – after all, Johnson was the architect of the facade.

We decided to take Johnson’s late-/post-modernist (in fact, even neo-classical) facade, and use it as a framework for an almost opposite language – the language of early-modernist movements such as Dada and De Stijl, as expressed in the interior design of the Aubette (Strasbourg), created between 1926–1928 by Sophie Taeuber-Arp, Jean/Hans Arp, and Theo van Doesburg.

The reason why we specifically wanted to refer to the Aubette had mainly to do with the sub-theme that underlies our Café 2 proposal as a whole: the question of art within the context of a restaurant. To address this sub-theme, it made sense to refer to the Aubette; after all, it is an emblematic example of a synthesis of the arts (expressing the quintessential utopian ideal of early-modernism: the total integration of art and everyday life). This early-modernist concept contrasts sharply with the late-modernist position, in which disciplines are more strictly separated from each other.

In our practice, we often try to reflect on the plurality within modernism, treating it not as a static monolithic movement, but rather as a maelstrom of conflicting accents and dialects. By reconciling (and synthesizing) different strands of modernism, we try to highlight unexpected overlaps, explore paradoxical transformations, and examine unfulfilled potentials. In the case of Full Scale False Scale, our project for Café 2 at MoMA, we focus on exactly such a paradoxical transformation – the translation from early (European) modernism to late (American) modernism, as exemplified by the contrasts and similarities that exist between the Aubette project (1926–1928), and Philip Johnson’s East Wing extension of the MoMA (1964).

In our proposal, we tried to synthesize (or better said, to collide) these two poles. On the one hand, our intervention refers to the arch-like shapes and repetition of Johnson’s windows – on the other hand, the colors and the use of relief refer to the Aubette project. That way, the mural becomes a timeline of sorts – marking the beginning and ending of a particular storyline within the ongoing narrative of modernism.

The title (Full Scale False Scale – in itself a quotation of Philip Johnson) thus refers to the system of complex translations and distortions taking place within this intervention. Not only are the windows translated and perspectively distorted from the facade onto the wall – the installation also refers to the way in which different notions of modernism have been historically translated and thus distorted, from one era to another and from one continent to another. A process of translations in which the MoMA obviously played (and still plays) a pivotal role.

A reader of sorts

Parallel to the development of the installation, we worked on an accompanying publication, to be released (in November 2019) by Roma Publications (Amsterdam). Titled Full Scale False Scale: A Reader of Sorts, the paperback (part reader, part collage) forms a subjective archive of research material, just as constructed as the installation itself. 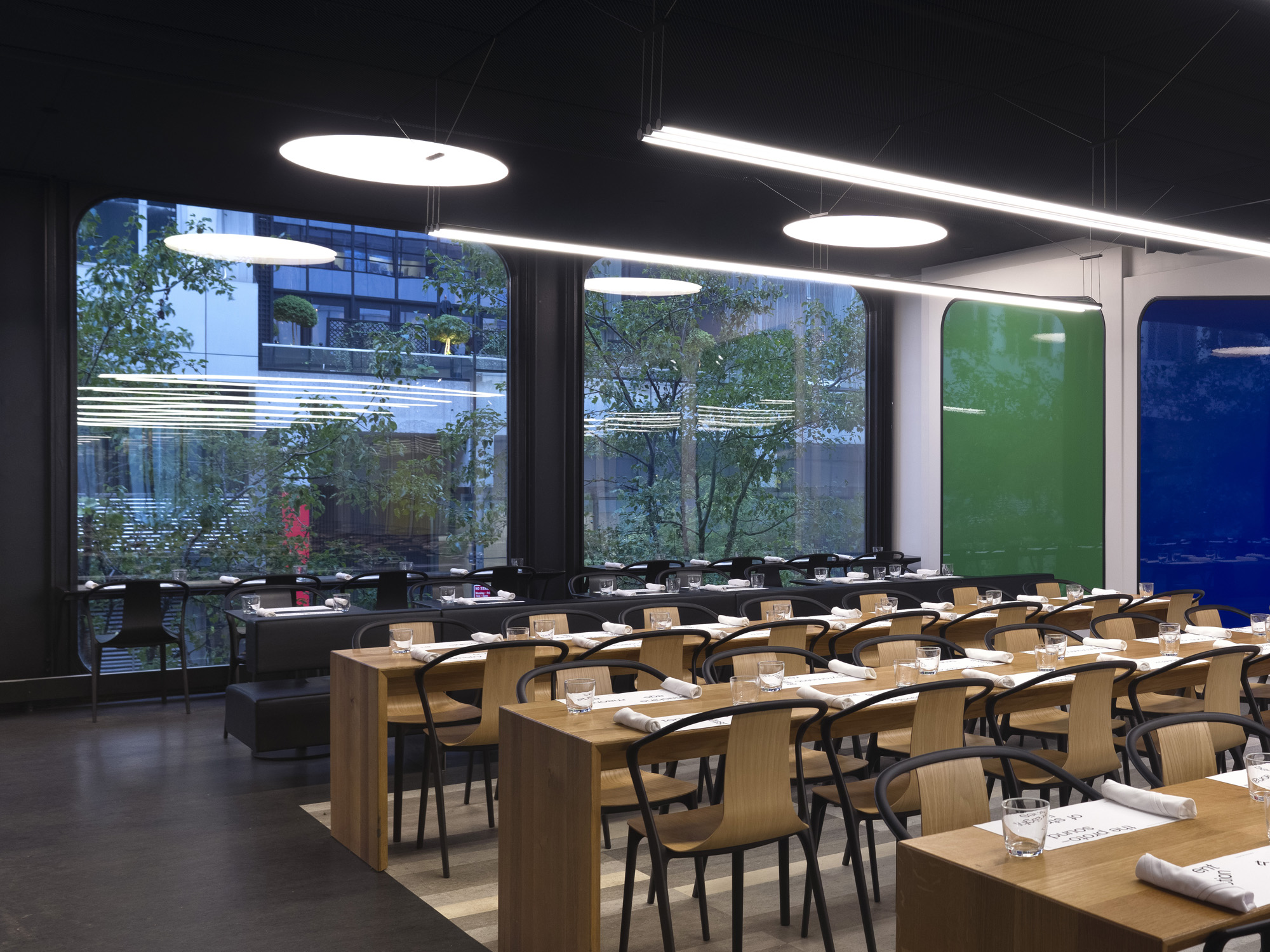 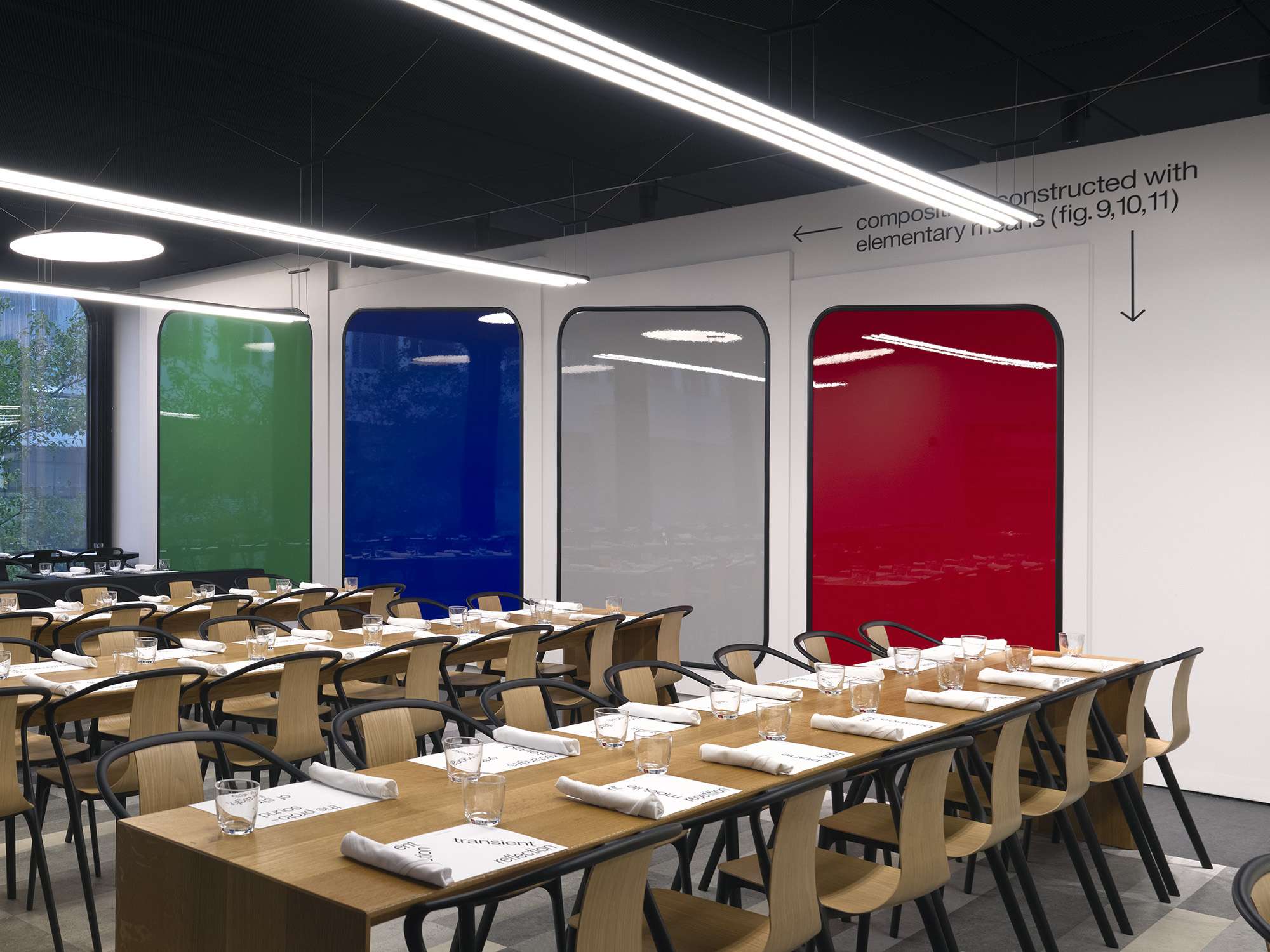 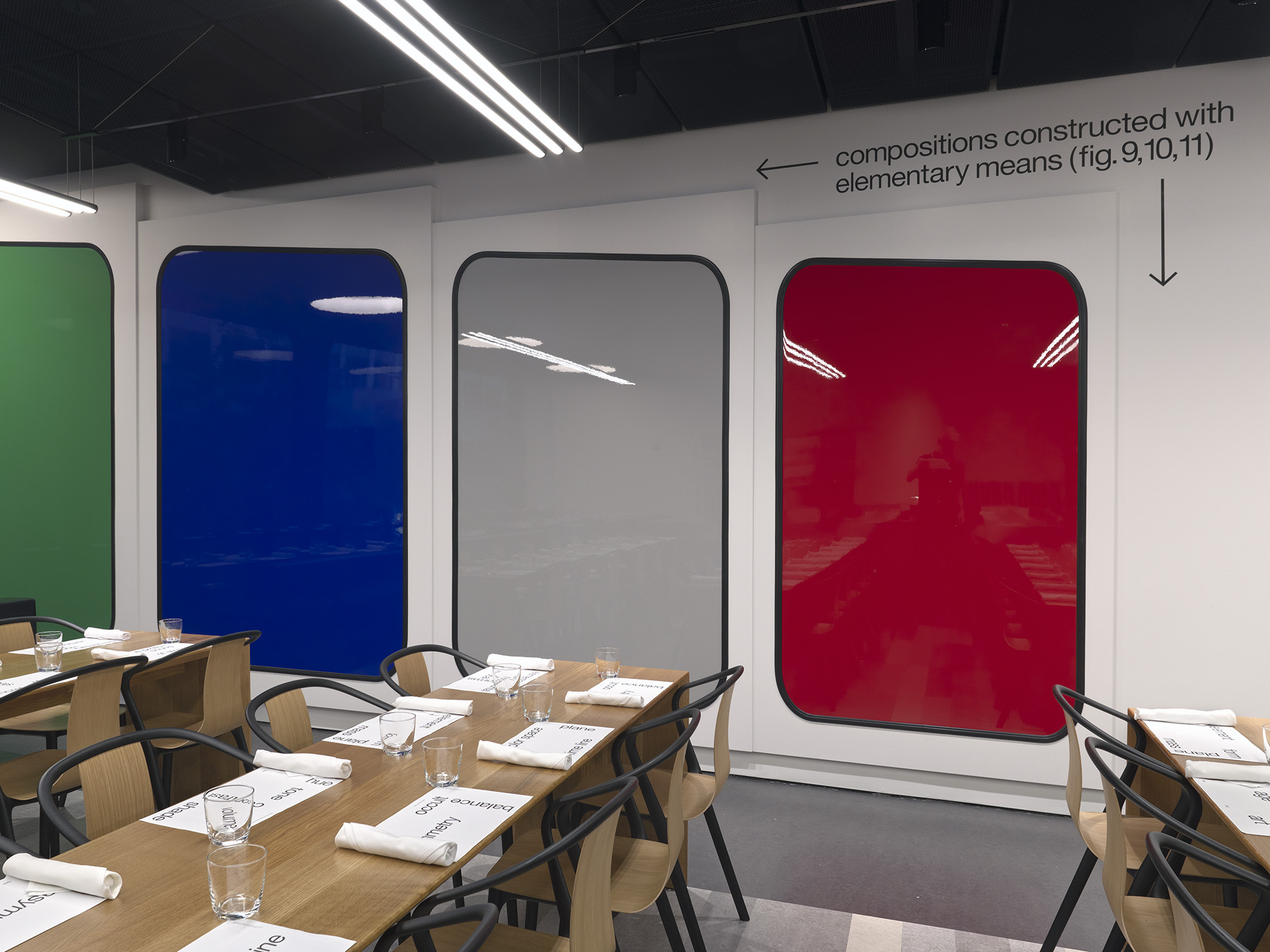 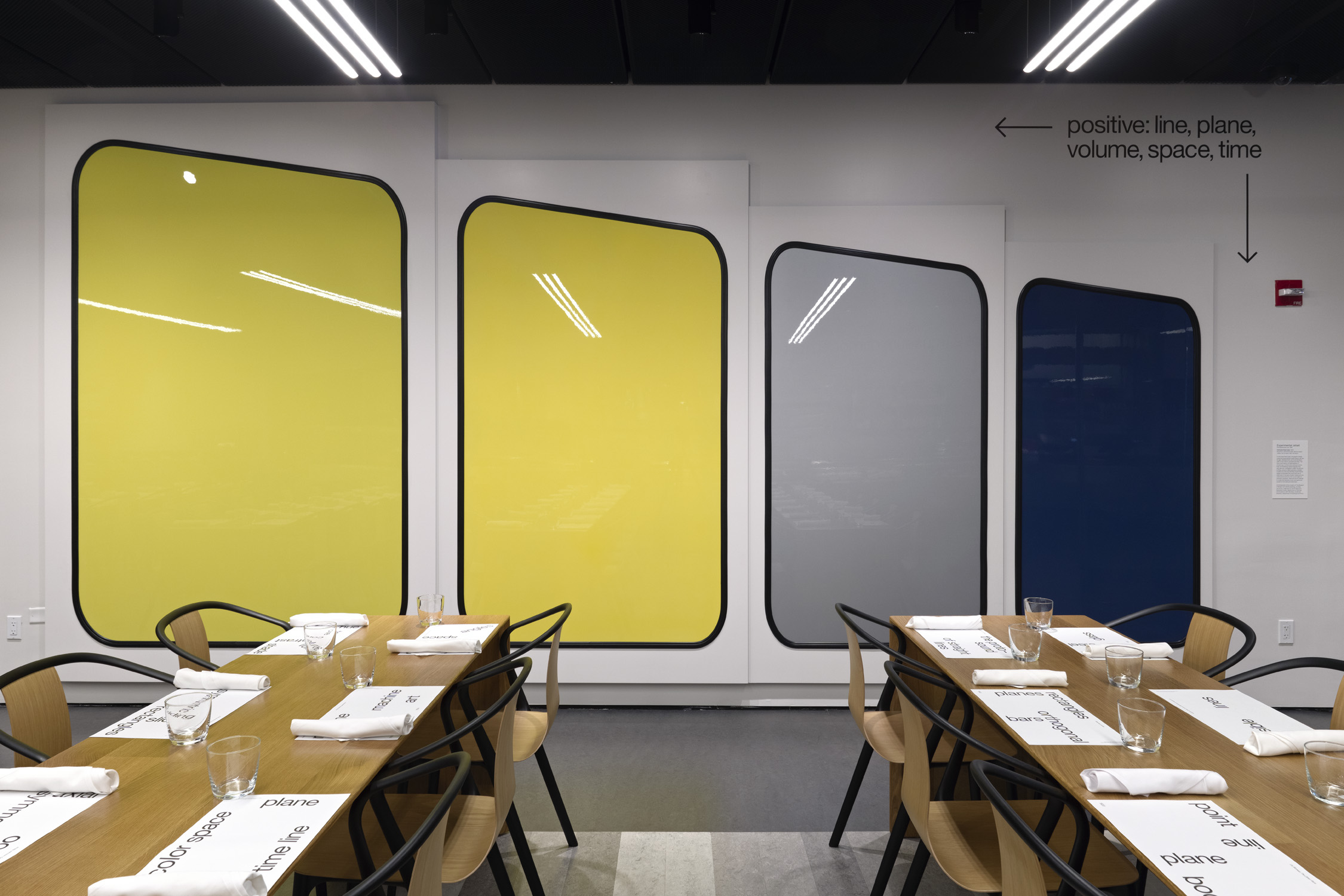 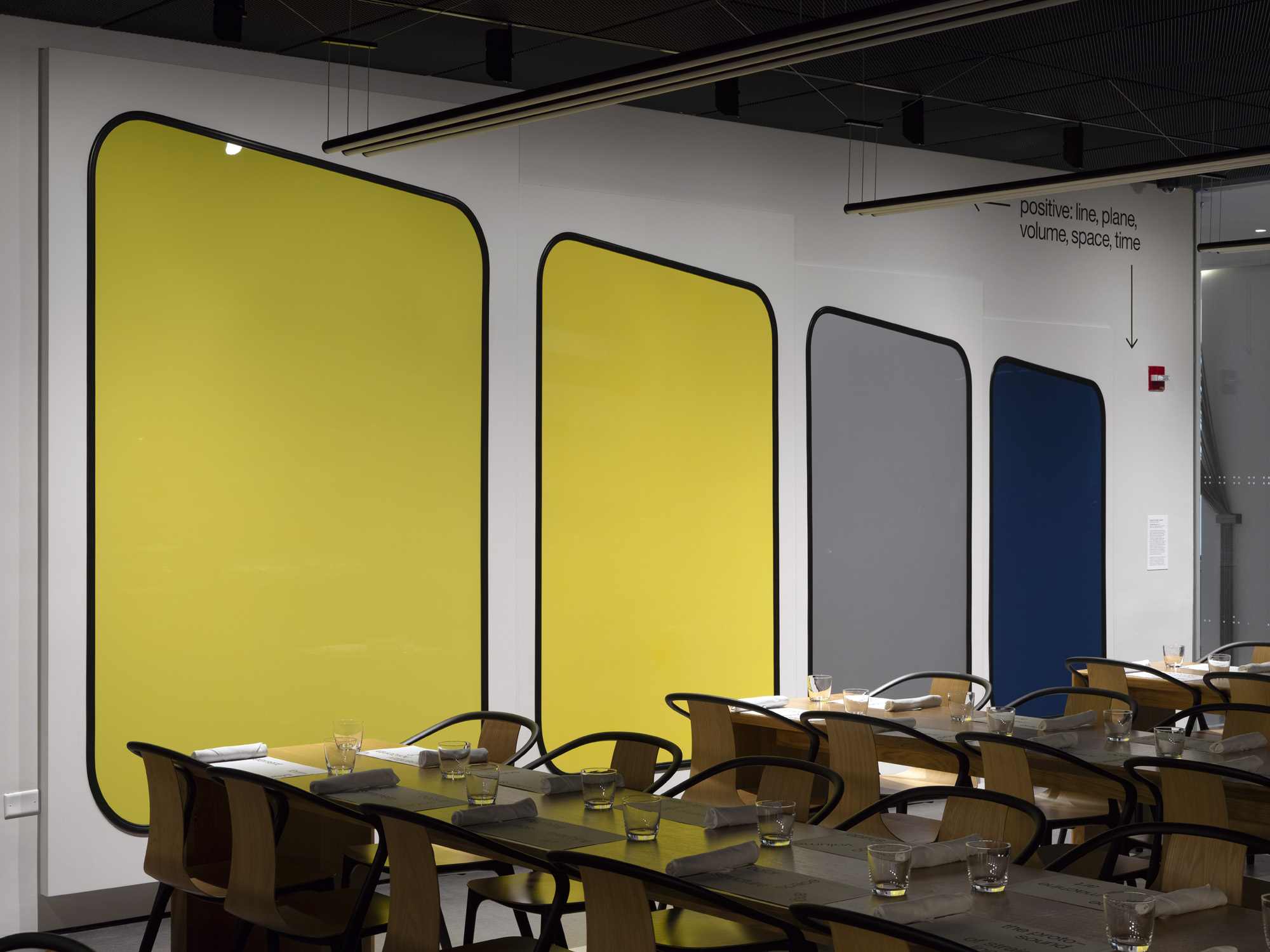 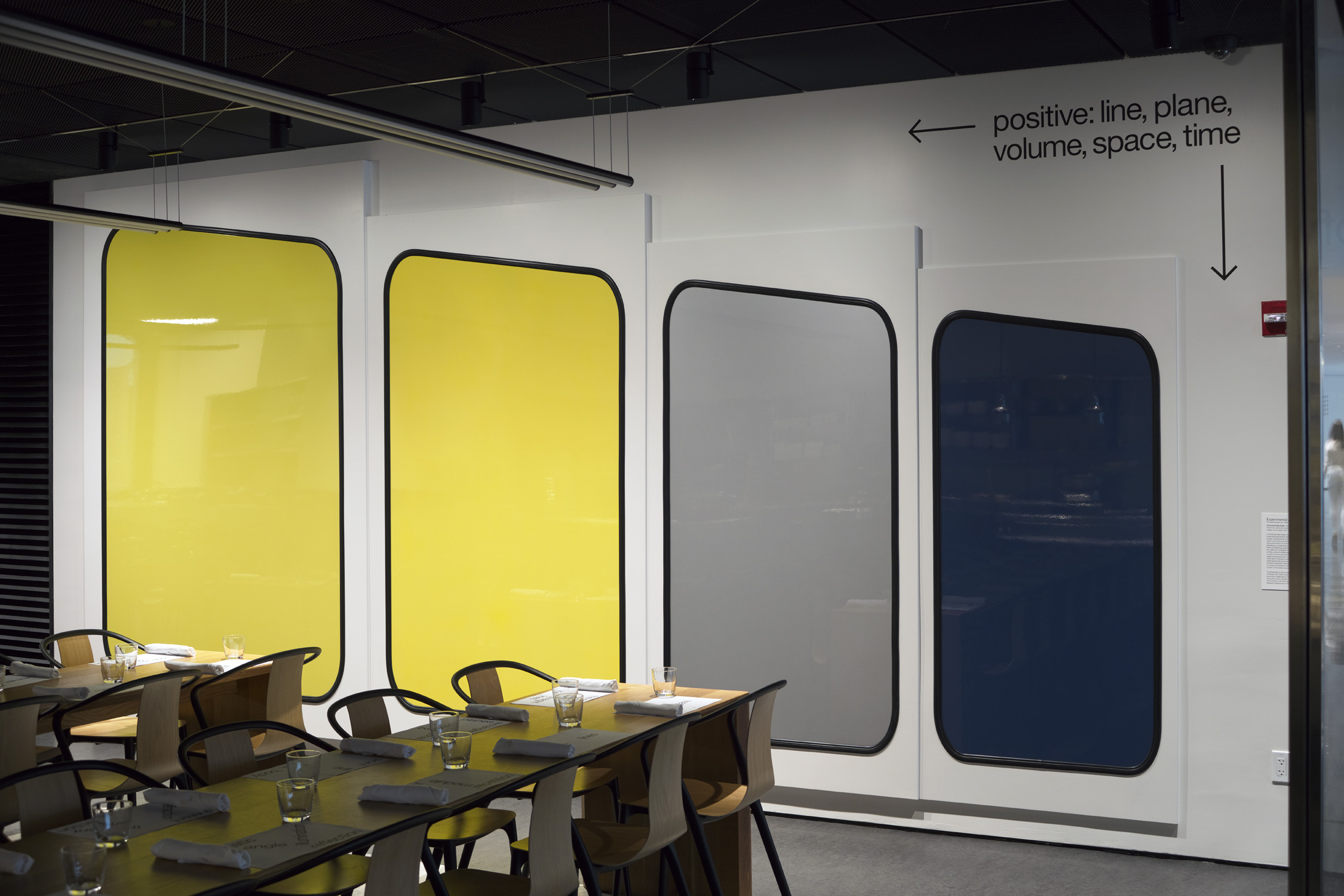 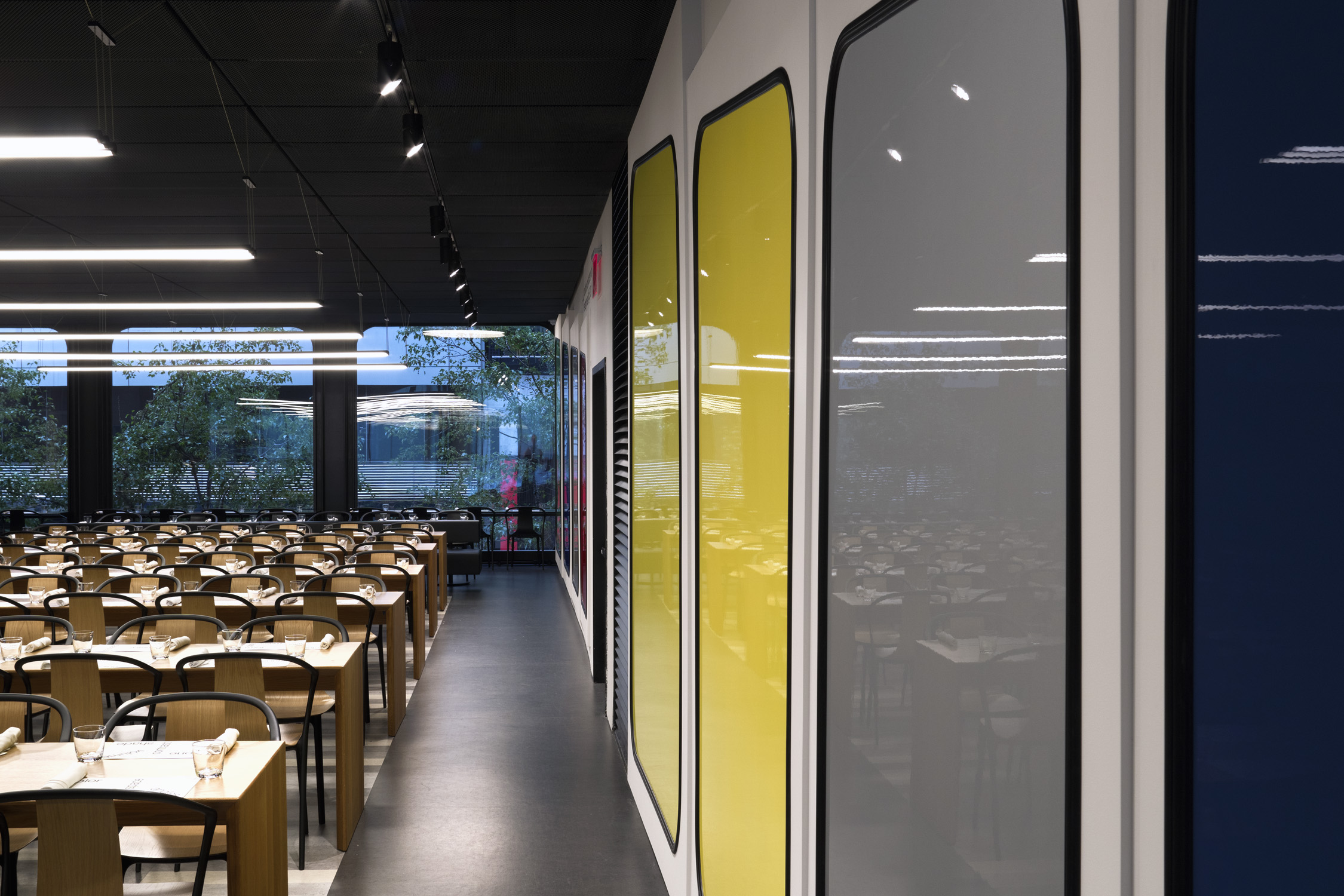 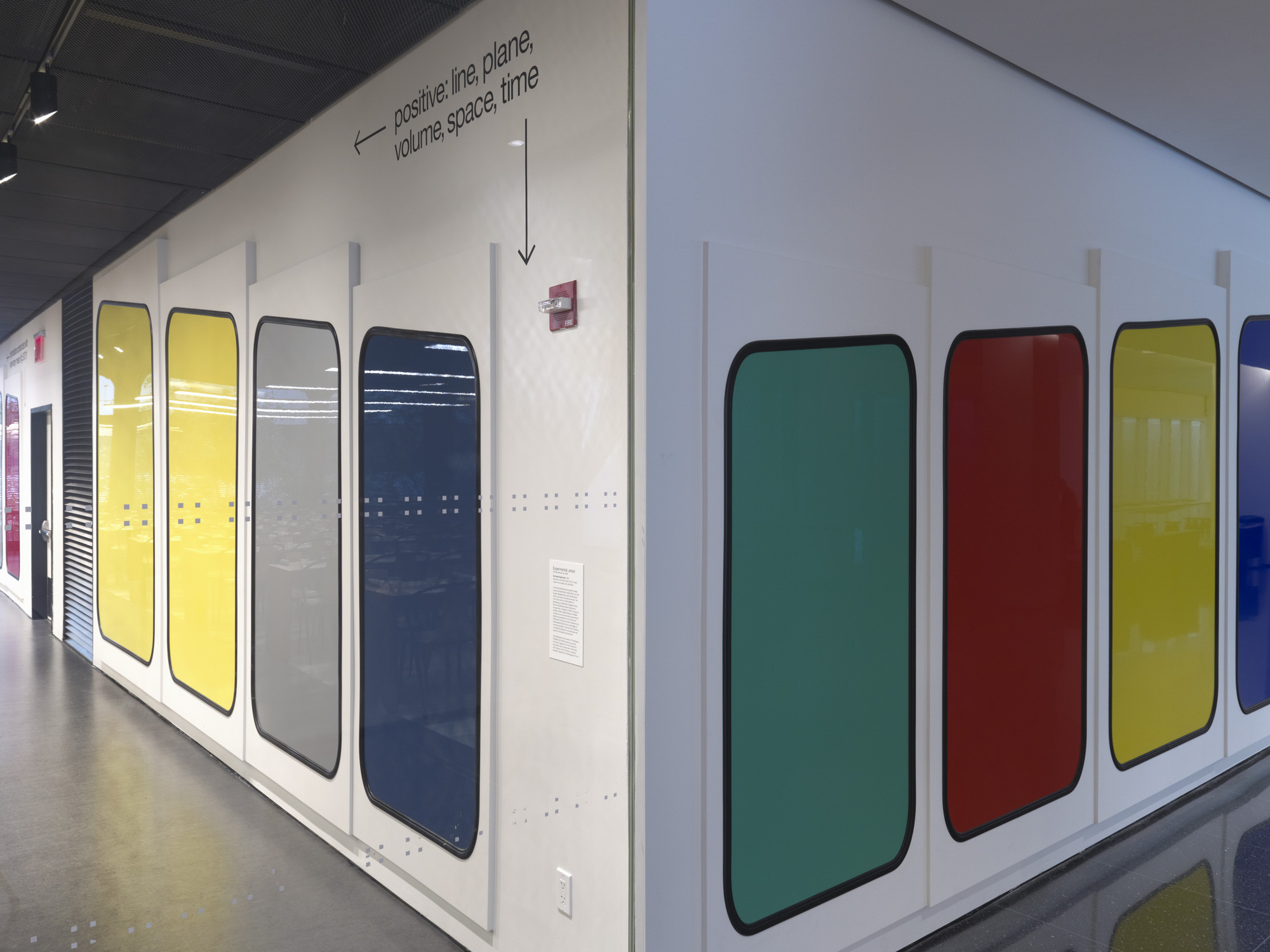 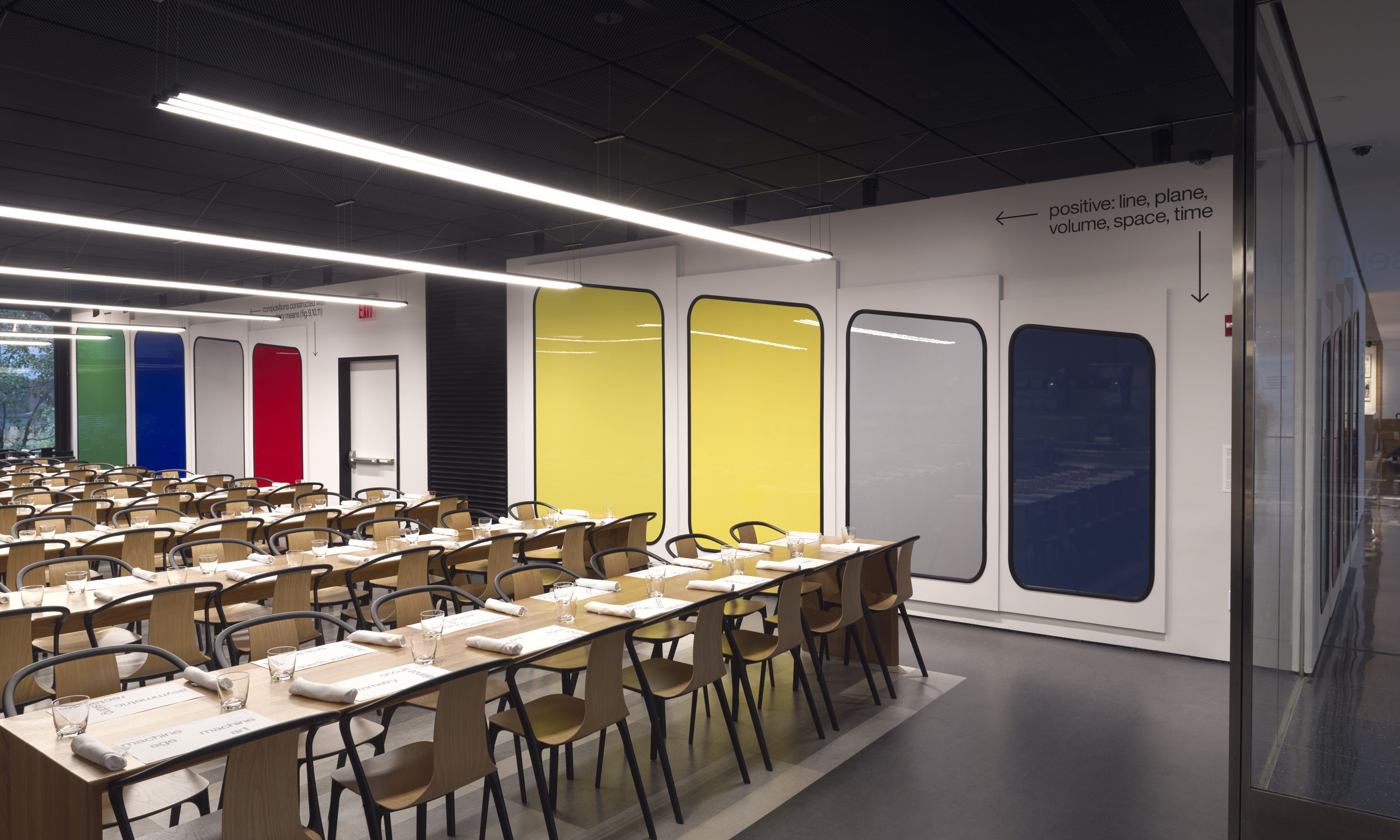 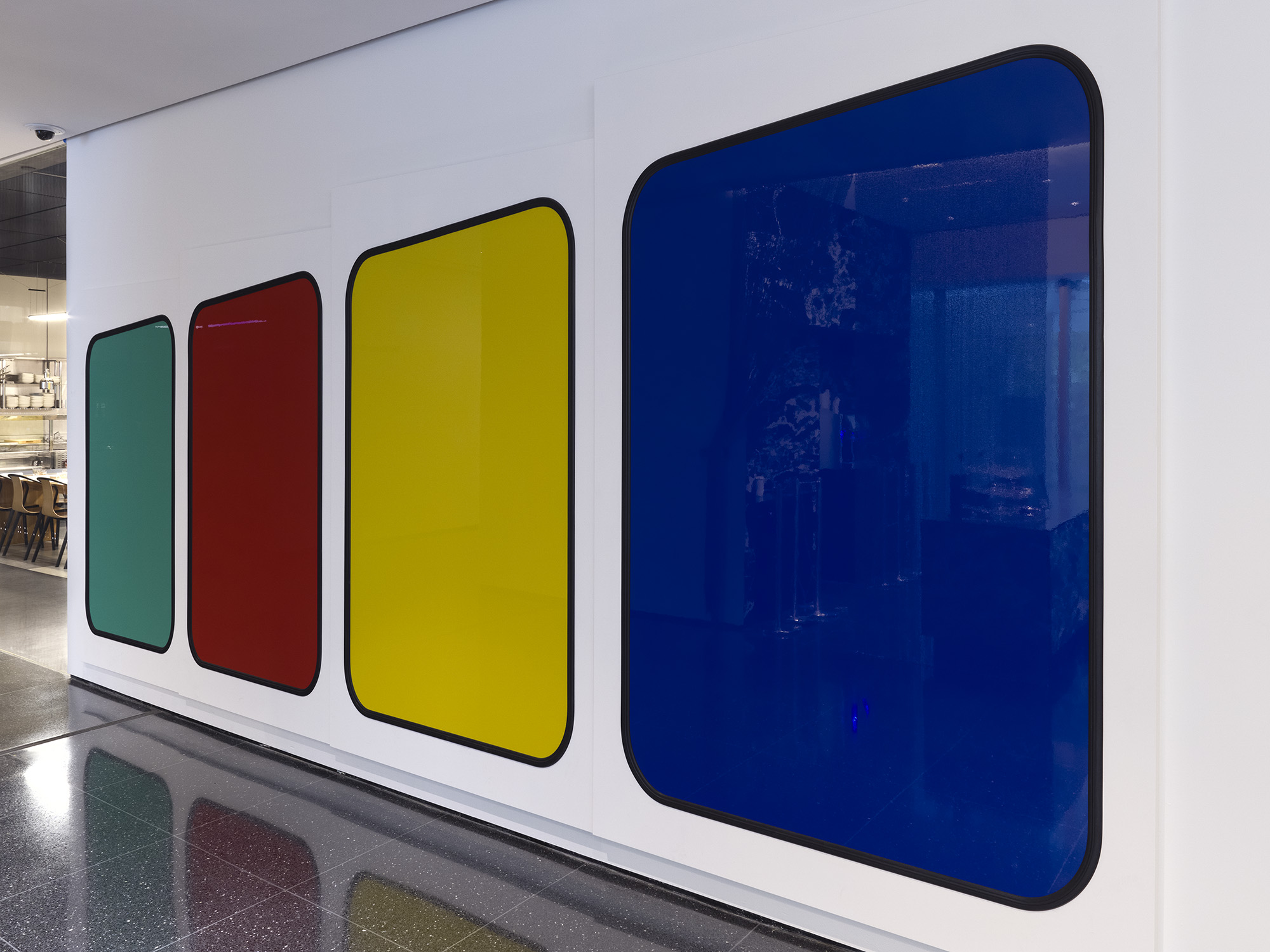 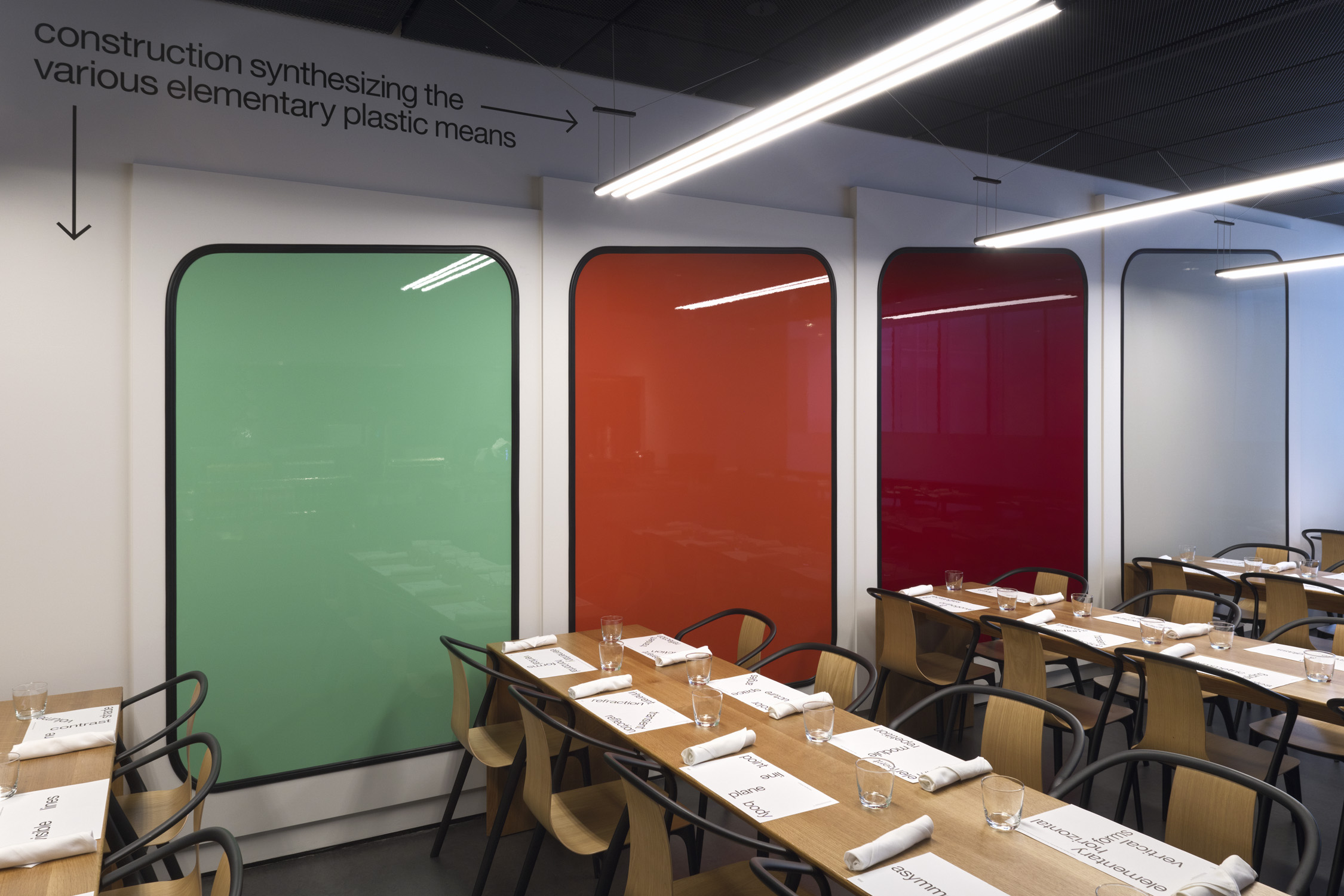 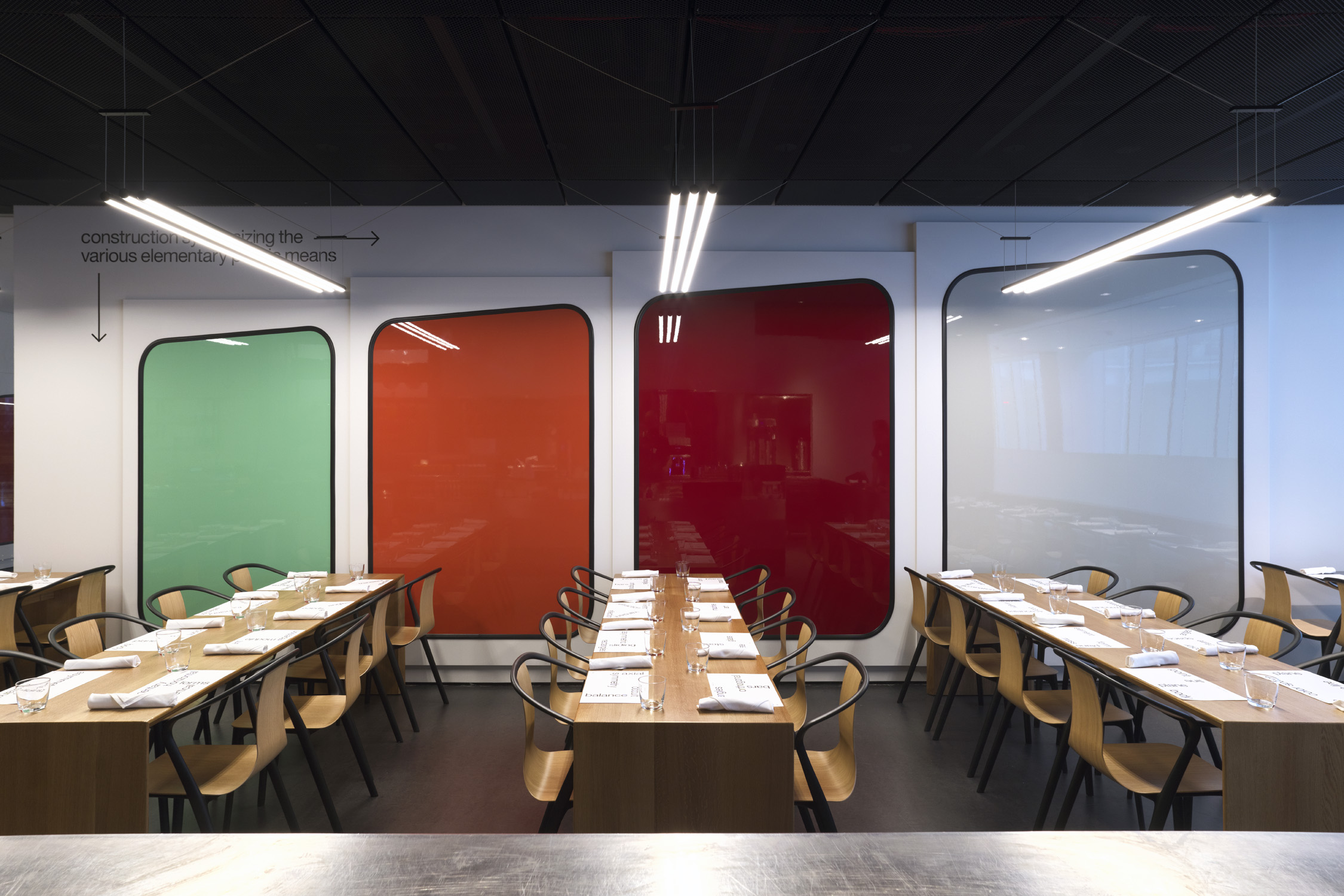 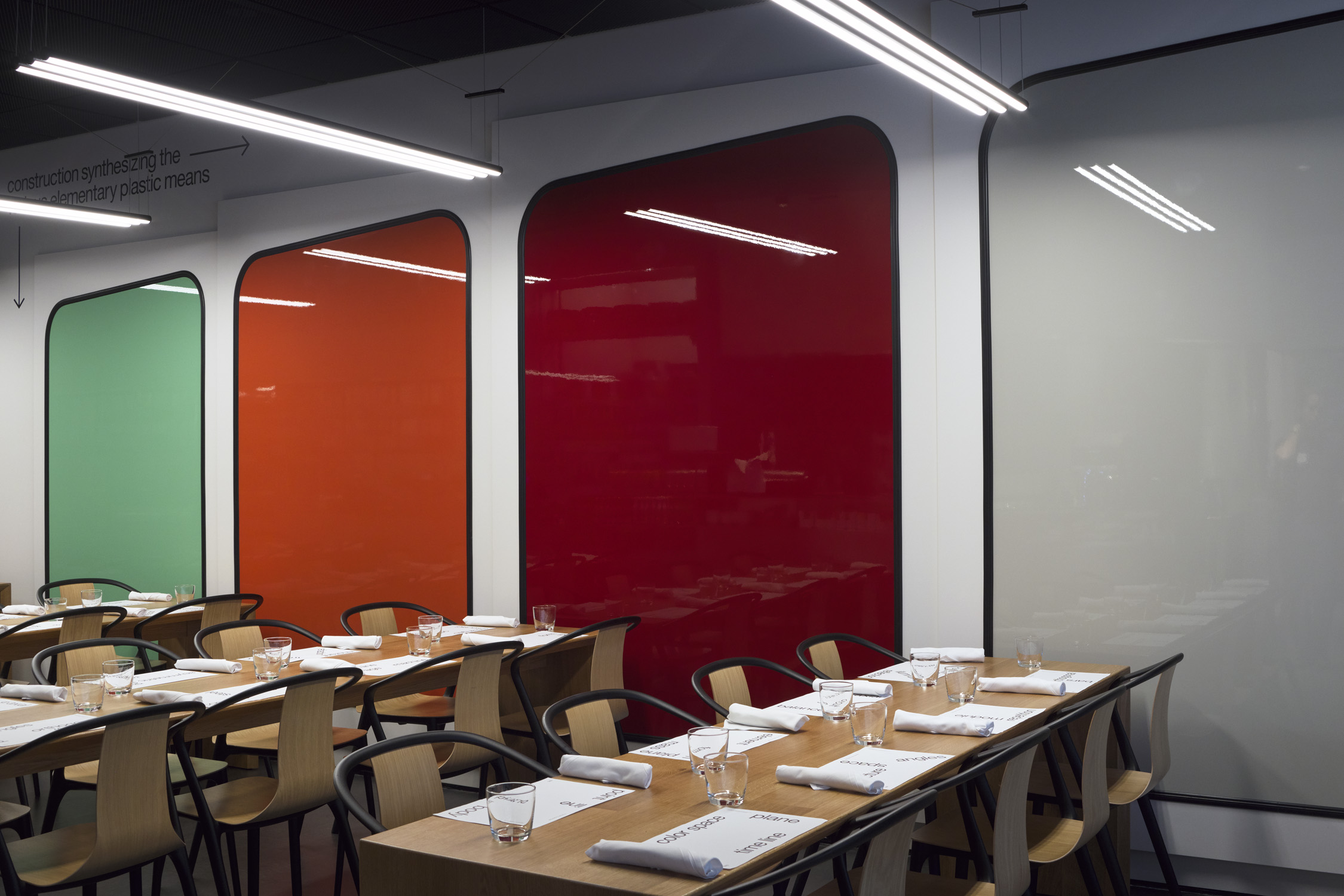 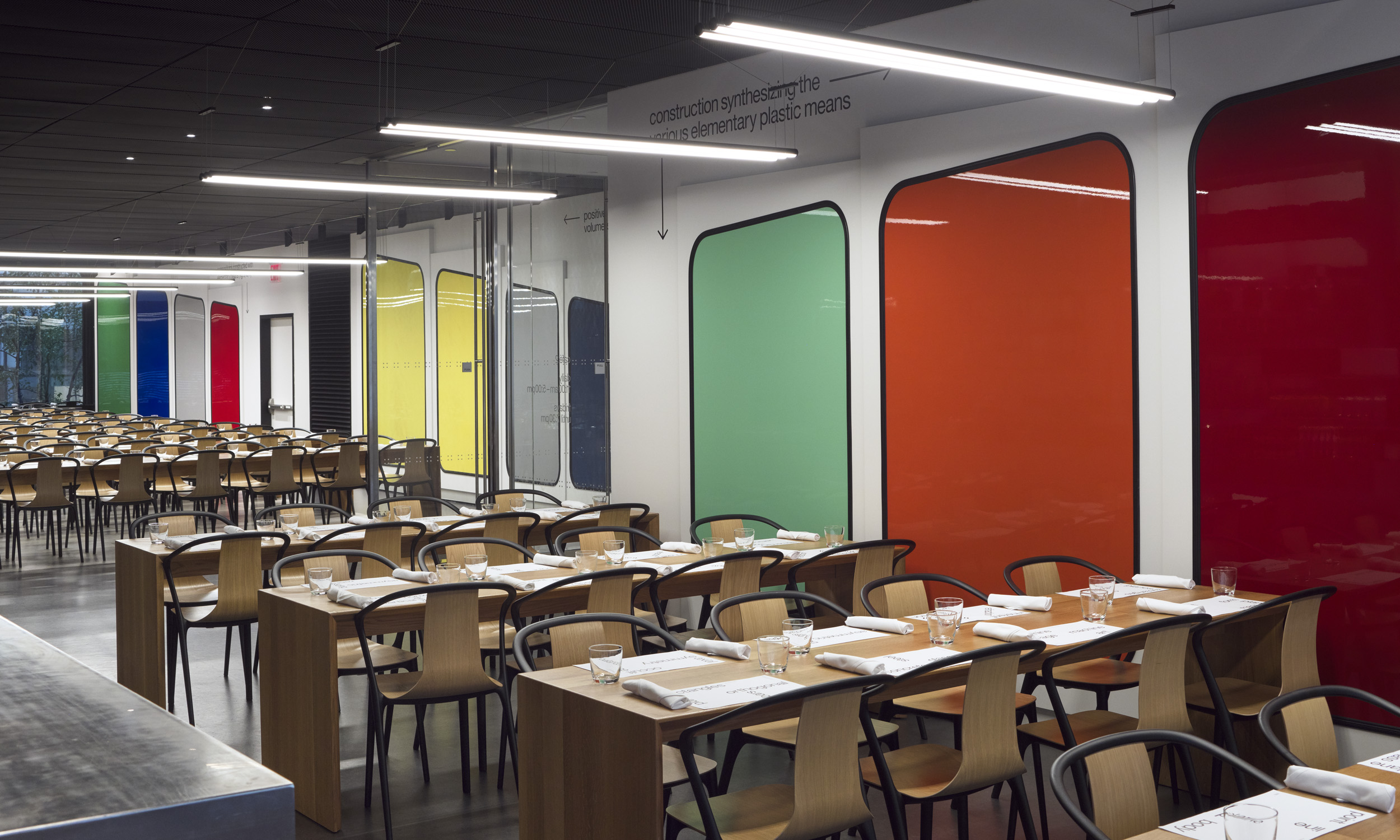