In 2004, we were asked by curator Mark Owens (formerly of O.R.G., now of Life of the Mind) to participate in a group show that took place between April 29 and May 20, 2004, at The Riviera, an exhibition space in Brooklyn, NY. The name of this exhibition was The Free Library, and the show featured artists and designers we feel quite related to, such as David Reinfurt (O.R.G.), James Goggin (Practise), Sara de Bondt and Ryan Gander.

For this first edition of The Free Library, Mark Owens wanted to exhibit a specific piece: the 'Modernism Backdrop', a banner that we created in 1998 as a part of the installation Black Metal Machine. This was an installation we created for SuperNova, a group show that took place at Bureau Amsterdam. The original banner is now hanging in our studio (see picture below). 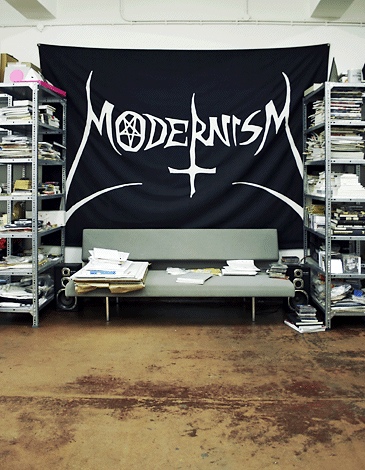 Mark really wanted to show the original banner, but it simply proved to be too large for the exhibition space (as the original banner, shown above, measures approximately 2 x 3 meter). So, for The Free Library, he actually produced a smaller version (120 x 80 cm) of the banner.
Shown below an installation view (detail) of the first edition of The Free Library, the group show that took place in 2004 at Brooklyn exhibition space The Riviera. (As we already explained, the Modernism banner displayed below is not the original piece, but a 120 x 80 cm replica). 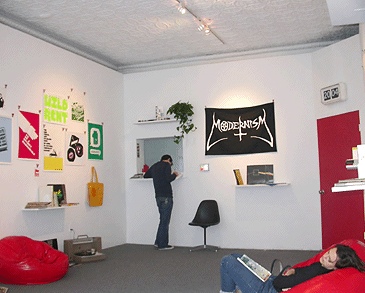 In the Summer of 2005, Mark Owens curated a second edition of The Free Library, this time taking place at Space 1026, Philadelphia. For this second edition of The Free Library, Mark asked us to design a new banner, specifically for the exhibition.
Thinking about the idea of a banner as a medium, as a format in itself, we thought it might be interesting to refer to a historical banner. That's when we decided to design a banner based on a classic poster we have hanging in our studio, a photograph of Patricia (Patty) Hearst posing in front of a banner displaying the symbol of the Symbionese Liberation Army (SLA).

The history of Patty Hearst and the SLA is far too complicated to repeat here, but in short the story goes like this: in 1974, Patty Hearst (granddaughter of newspaper tycoon William Randolph Hearst) was kidnapped by The Symbionese Liberation Army, a sect-like terrorist group, ideologically situated somewhere between Manson and Mao. Shortly after being kidnapped, Patty Hearst actually joined the SLA, and changed her name into Tania (after Tania Tamara Bider, a female guerilla who fought alongside Che Guevara in Bolivia).

The photograph shown here is a vintage offset poster (40 x 60 cm) that we bought a few years ago through E-Bay. The poster clearly shows the SLA symbol, a snake with one tail and seven heads. For our contribution to the second edition of The Free Library, we wanted to do something with this symbol.

So for the exhibition, we designed a banner that looked almost exactly like the original SLA banner. There was one difference: instead of the original symbol, a snake with one tail and seven heads, our banner showed a snake with one head and seven tails.
We called this piece 'Semiotic Liberation Army'. In a way, the whole idea of reversing the symbol had to do with our own fuzzy brand of dialectical reasoning: we were thinking along the lines of 'freeing' the symbol by confronting it with its opposite. Hence the title.

Shown below are two installation views (details) of The Free Library exhibition at Space 1026: 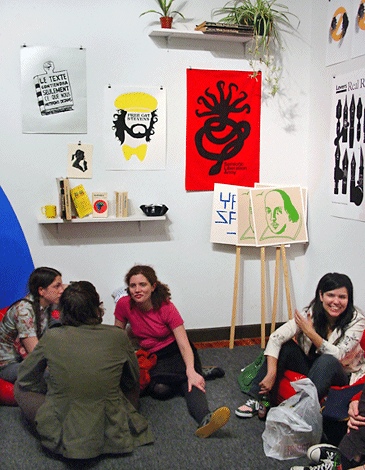 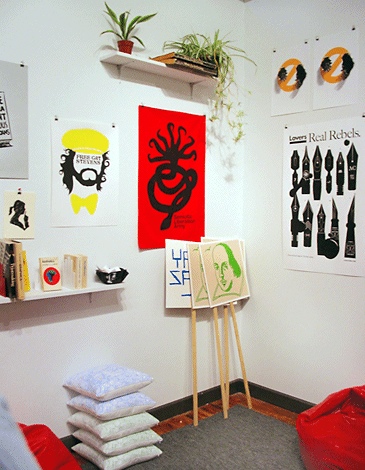 Next to the banner, we also created a simple set of SLA badges for The Free Library, similar to the set we designed in 2003 for Tourettes (See Stations of Tourettes). The badges were designed by us, and produced by Mark Owens. We haven't photographed this set of badges yet, but we will soon.

A third edition of The Free Library took place at London exhibition space M+R, during London Design Week, in September 2005. This show was curated by Mark Owens and Sara de Bondt. The 'Semiotic Liberation Army' banner was shown there as well.

Thanks to Mark Owens and Clint Woodside. 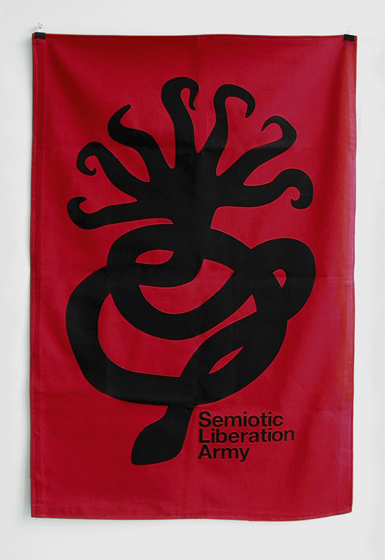