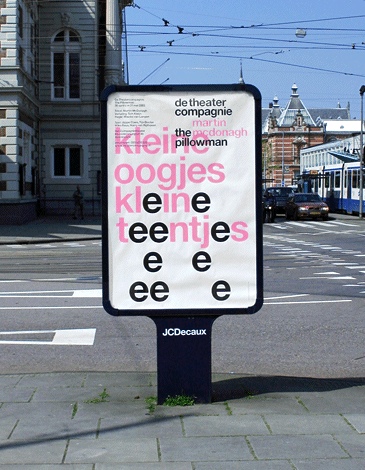 As we explained earlier (see DTC / Gilgamesj), the main concept behind the design of our posters for De Theatercompagnie is to focus on quotes taken from the plays. In the case of The Pillowman, a play written by Martin McDonagh, and staged by De Theatercompagnie between April 20 and May 21, it was actually quite hard to find a good quote, as the subject matter of the play was quite heavy. The Pillowman is basically a pitch black comedy dealing with themes such as murder, torture and child abuse.
On the one hand, we wanted to capture the slightly sinister atmosphere of the play. On the other hand, we wanted to counter the darkness of the play by designing a light-looking, almost childish poster. After reading the play a couple of times, we finally came across a couple of lines that were both sinister and innocent: 'Kleine oogjes', which means 'small eyes', and 'kleine teentjes', which means 'little toes'. Together, these lines worked almost as a nursery rhyme. We used the colour pink to underline this strange mixture of morbidity and innocence.

Our main concept behind De Theatercompagnie's A2 posters has always been to create a set of two separate posters for each play; two posters that would somehow react to each other when hanging in the city. Two posters having almost a dialogue, like actors. (See for example the A2 posters that we designed previously for Gilgamesj).
Shown below are the two posters we made for The Pillowman. We played around a bit with the idea of the visual pun: in the line 'kleine oogjes' (little eyes) there are two o's, as much as eyes, so we emphasised that by making the o's black. In the line 'kleine teentjes' (little toes) there are five e's, as much as toes, so there we emphasised the e's, creating the suggestion of ten cut-off toes.

(In 'Designed by Peter Saville' by Emily King, published by Frieze in 2003, there is an interview in which Saville mentions how much he dislike the classic idea of the visual pun: "...a logo for a restaurant could be a bite out of a plate. Well, to a young person growing up on Roxy Music, that was utterly banal". However, we have to admit that we really like the concept of the visual pun; we like how it can transform words into tiny, hermetic bubbles of logic). 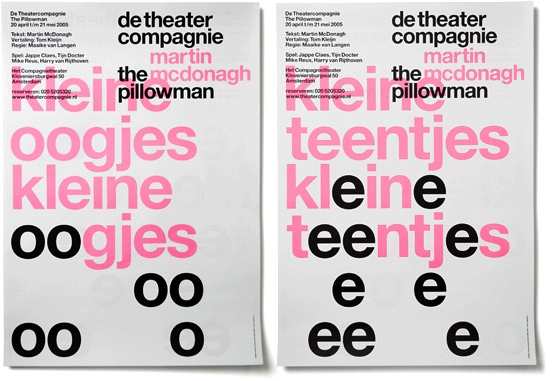 The outdoor version of the poster (size 116 x 171 cm) combines the quotes ('little eyes' and 'little toes') in one design. That version can be seen at the top of this column (Scroll all the way up).

Later that year, when the play toured the Netherlands, we designed several other versions of this poster, including A0-sized versions, and versions containing slightly modified information, date- and location-wise. There was also a postcard published, an A5-card that was perforated into two A6-sized parts. We haven't photographed these items yet.

Shown below is the brochure we designed for The Pillowman. Using the same folding technique as we previously used for the Gilgamesj brochure (see again DTC / Gilgamesj), this brochure is basically a double-sided A2 poster folded to an A5 booklet. While one side of the A2-sized sheet shows all information, to be read as separate pages, the other side is a typographic poster, displaying the name of the play, the name of the theatre group (De Theatercompagnie), and the two quotes.
Also featured in the folder is a series of paintings by Paula Rego, inspired by The Pillowman (courtesy of Marlborough Fine Art, London), and a sequence of four typographic pages, telling four terrible fairy tales that appear in the play.
Shown here is first an image of the brochure in its folded form, followed by two images of the brochure in its unfolded form (back and front): 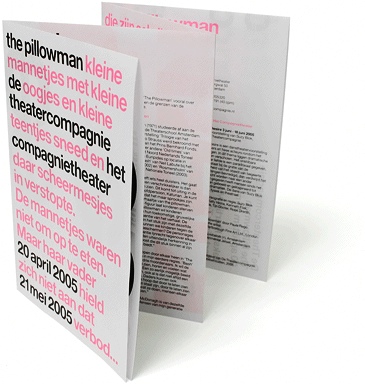 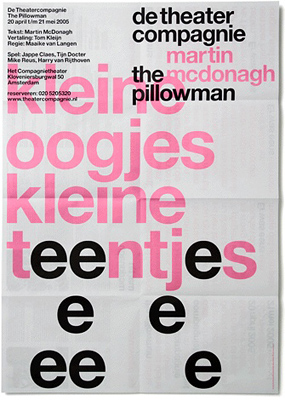 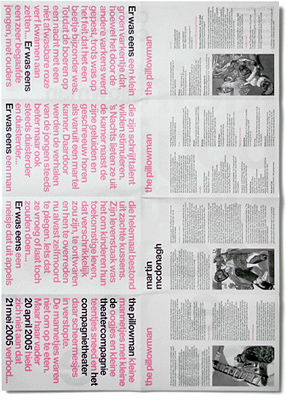 Shown below is a book we designed, a publication containing the text of The Pillowman. We kept it quite clean: a simple 124-page paperback (10.5 x 14 x 0.7 cm) with a nice pink cover (referring to the pink we also used in the posters). Published by De Theatercompagnie, the ISBN number of the book is 90-809716-1-8. 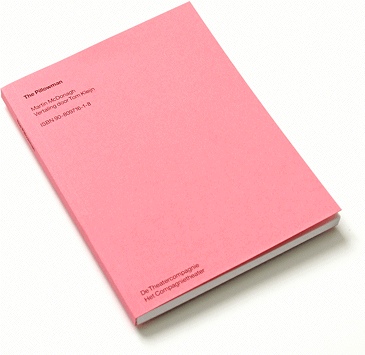 The plan was that this book would be the first in a series of plays published by De Theatercompagnie. Shown below is a simple sketch of how we wanted to design the series: a mini library of books varying in height, displaying the titles of the books almost like a tab system.

(The below image is actually a simulation, a sketch we made only to show our idea for the design of the series to De Theatercompagnie. They approved of the idea, but unfortunately, because of a lack of budget, no further books were published).