Peanuts was a piece played by De Theatercompagnie between January 16 and February 17, 2007, at Het Compagnietheater in Amsterdam. Written by Fausto Paravidino and directed by Marcus Azzini, Peanuts was a play carrying a very explicit political message. The play used the traditional format of the classic Peanuts comic to tell a story about the historical confrontation between anti-globalist protesters and the riot police during the G8 summit in Genoa, 2001.
(Some time after we designed the posters for it, we actually saw the play, and really liked it. The play was a vibrant, cartoon-like combination of Pop-Art and Brechtian propaganda, refreshingly moralistic and didactic, featuring singing and dancing; what's not to like?)

As with the previous posters we designed for De Theatercompagnie (see for example DTC / Gilgamesj and DTC / Driekoningenavond), the whole concept behind the printed matter revolved around the idea of taking textual fragments from the play, and dividing these fragments over two posters; two posters reacting to each other, almost like two actors engaged in a dialogue. In the case of Peanuts, we used the titles of the seperate scenes (the 'acts').
In short, the script of Peanuts is divided in a whole lot of subchapters. These chapters have titles such as 'Plutocratie' ('Plutocracy' ), 'Marktwetten' ('Laws of the Market'), 'Revolutie en Nieuwe Strijdmethodes' ('Revolution and New Methods of Struggle'), etc. etc. We decided to use these words on the posters.

Shown below two A2 posters we designed for Peanuts (actually, these are two sides of the same sheet of paper; the poster was printed on both sides). As we already wrote, the words featured on these posters are in fact the titles of the subchapters of the play. We put these words in white boxes, to refer to text balloons and panels of comic strips, but also to refer to political posters pasted on top of each other, and to placards carried by protesters. The colours we used were black and yellow, referring to Charlie's Brown famous zig-zag sweater.
We designed the posters in such a way that, when placed next to each other, they form one composition: 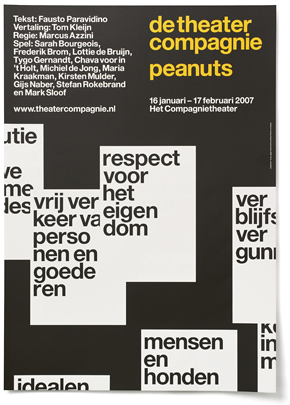 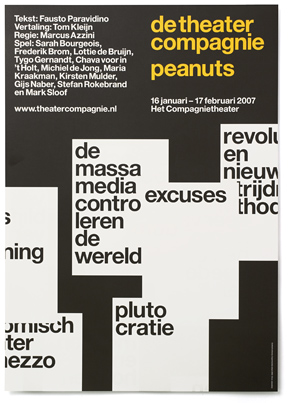 In fact, when displayed next to each other, the posters form one continuous line: 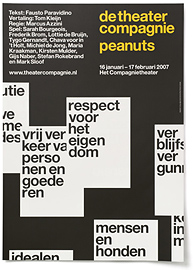 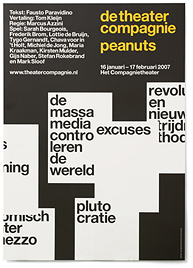 We were also asked to design a so-called 'mupi'-sized poster, to be used in outdoor showcases: 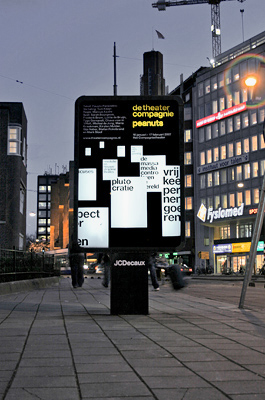 As with the previous plays (Gilgamesj, The Pillowman etc.), we were also asked to design a simple brochure. Basically, it's a double-sided A2 sheet, folded to an A5-sized booklet. Shown below are the front and back of the A5-sized booklet: 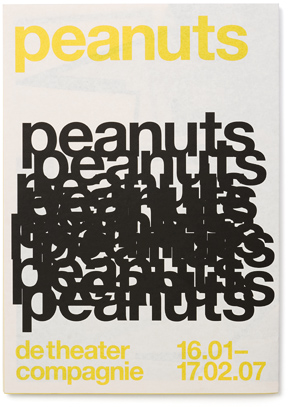 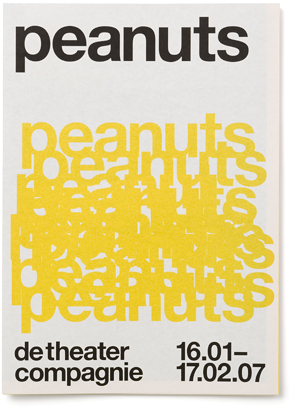 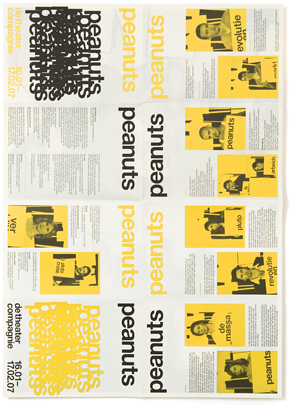 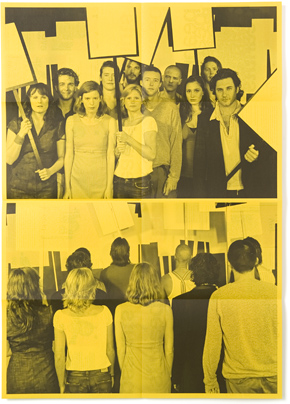 As you can see, on the inside of the brochure, we placed photographs of the actors, holding placards. These photos were part of a larger series of promotional images, a series we created in collaboration with photographer Johannes Schwartz. More about the overall concept behind these promotional photographs can be read here (go to DTC / Driekoningenavond and scroll down).

First of all, we made portraits featuring individual actors holding typographic placards, standing in front of a graphic background. (These portraits can be seen in the brochure shown above, on the sheet on the left).
In addition to these individual portraits, we also made two group portraits of the actors (Sarah Bourgeois, Frederik Blom, Lottie de Bruijn, Tygo Gernandt, Chava voor in 't Holt, Michiel de Jong, Maria Kraakman, Kirsten Mulder, Gijs Naber, Stefan Rokebrand and Mark Sloot). These photographs featured them holding empty placards, again in front of a graphic background. On the first photograph we showed the actors from the front, on the second one we showed them from the back: 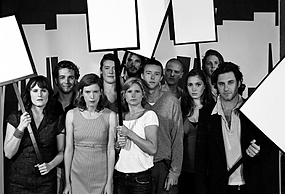 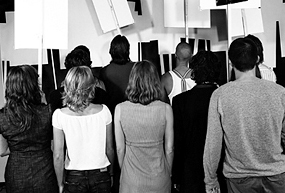 After we made the posters and the promotional photographs, De Theatercompagnie asked us if they could use the actual placards in the play itself, to announce the different subchapters of the play. (This is something that happened a few times before, something that we find very interesting: the fact that sometimes elements from the posters slip into the play. It shows that the play not only influence the poster, but that the poster can also influence the play). Shown below a photograph taken during the play, clearly showing the placards. Photography by Sanne Peper (c) 2007: 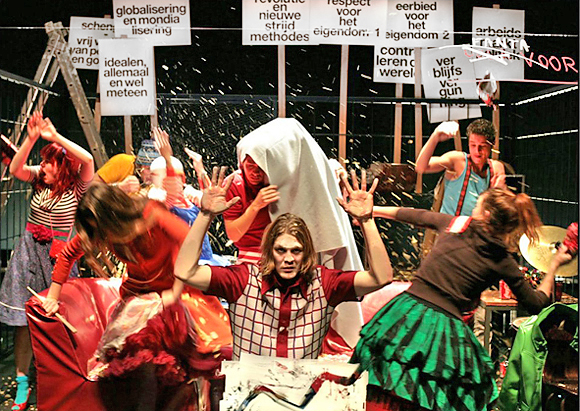 We also designed a series of badges that were sold at Het Compagnietheater during the play, as official 'band' merchandise. These badges (diameter 25 mm) featured the names of all the characters in the play:

As was the case with all of the other plays (Gilgamesj, The Pillowman, Driekongingavond, etc.), for Peanuts we also had to design lots of tiny last-moment advertisements (mostly for magazines, newspapers and websites). We won't show all these small adverts here, but some examples can be seen at DTC / Banners. On that page, we show a couple of banners that were used on various theatre-themed websites (such as www.moose.nl).
Apart from website banners, we also designed, for Peanuts, some actual banners: a series of flags that were hanging at the front of the theatre hall. These flags featured the name of the play. However, we never got the chance the actually photograph these flags.