Driekoningenavond (in English better known as 'Twelfth Night, Or What You Will') is a piece by William Shakespeare. Amsterdam theatre group De Theatercompagnie toured with this play through the Netherlands between February 15 and April 15, 2006. The play featured two well-known Dutch actors: Carice van Houten and Paul de Leeuw.

As with the previous posters we designed for De Theatercompagnie (see DTC / Gilgamesj and DTC / The Pillowman), the whole concept behind the printed matter revolved around the idea of taking two quotes from the play, and dividing these quotes over two posters; two posters reacting to each other, almost like two actors engaged in a dialogue.
After we read Driekoningenavond, we decided that the two quotes that we wanted to use were "ik wou dat u was zoals ik wou dat u was" ("I wished you were as I wished that you were") and "ik denk dat u denkt dat u niet bent wie u bent" ("I think that you think that you aren't the one you think you are").
First of all, we liked these quotes because they referred to some of the main themes of the play: mistaken identities, farcical situations, etc. More importantly, we immediately saw that the repeating words in these quotes would translate quite nicely into typographic compositions.

Below the two main posters. First, the A0-sized poster, then the A2-sized version: 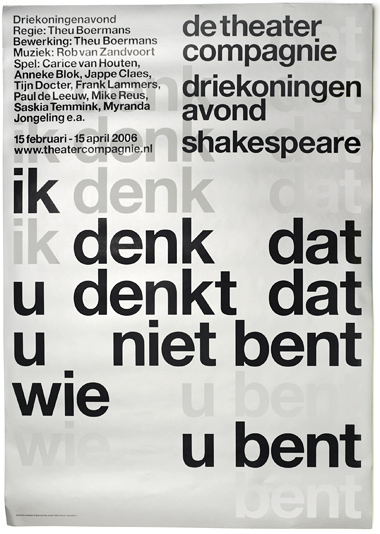 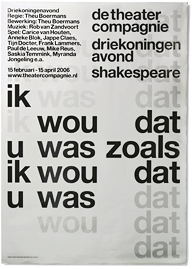 The colours used were black and silver. We liked the idea of using silver; its mirror-like appearance fitted well with the theme of lost identities.

As with the previous plays (Gilgamesj and The Pillowman), for this play we also designed a simple brochure. Basically, it's a double-sided A2 sheet, folded to an A5-sized booklet. Shown below are the front and back of the A5-sized booklet: 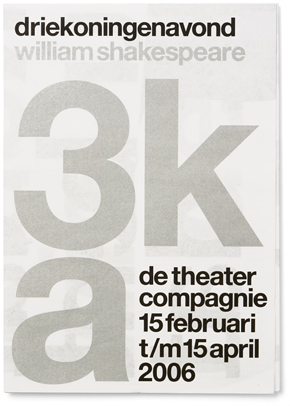 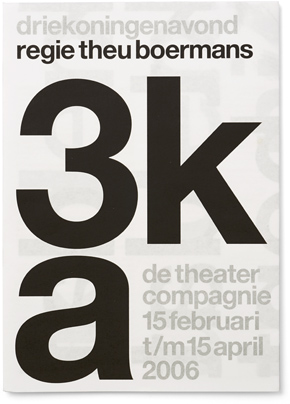 The abbreviation '3KA' refers to the title of the play: Drie Koningen Avond. Again, the colours used are black and silver. This booklet unfolds into a double-sided A2 poster: 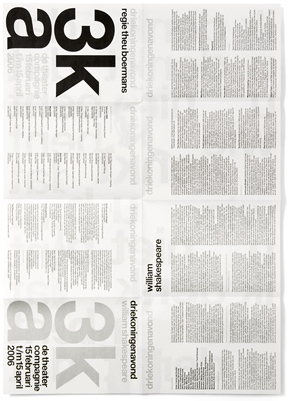 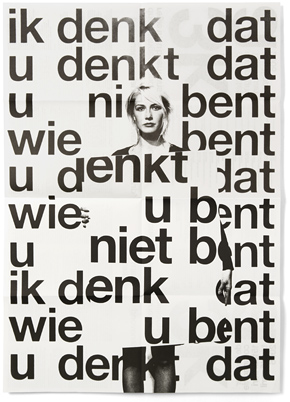 As you can see, on the inside of the brochure, we placed a large photograph of actress Carice van Houten, standing in a typographic background, holding a typographic placard. This photo was part of a larger series of promotional images, a series we created in collaboration with photographer Johannes Schwartz. More about these photographs later.

(This A2-sized image of Carice van Houten was later also printed on silver paper, as a limited-edition A2 poster for promotional purposes).

Next to the poster/brochure, we were also asked to make a simple postcard, to be used as a flyer. We designed a double-sided A5-sized card, perforated in the middle to form two A6-sized cards.
Shown below the front and back of this card. On the left, a photograph of Carice van Houten. On the right, a photograph of comedian Paul de Leeuw. On the back of the card some information concerning the dates and locations of the play: 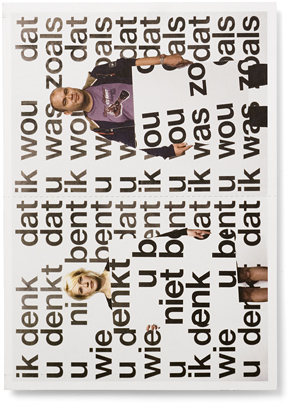 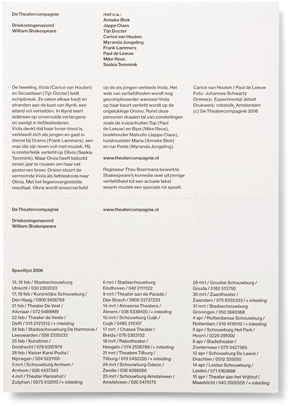 Regarding the promotional photographs: towards the end of 2005, De Theatercompagnie asked us if we could come up with a concept for their promotional pictures. It was never the intention that these photographs would be used on the actual posters; everybody agreed that the posters should stay as typographic as possible. But once in a while, De Theatercompagnie needed some photographs, to mail to the press, to send to regional theatre halls, etc. etc.
The concept we came up with was quite simple. Instead of putting photographs on posters, we wanted to do the opposite: put posters on photographs. Our idea was to show the actors in front of typographic backgrounds, holding typographic placards, almost like so-called 'sandwich men'. For these pictures, we worked together with Johannes Schwartz, a brilliant photographer whom we have collaborated with quite often (on projects such as High Noon, High Light, High Nature, High Rise, etc.).
Between 2005 and 2007, we did a couple of these photo shoots. These shoots usually took place at an abandoned room at Het Compagnietheater, the walls of which we wallpapered with typographic posters, to serve as a background for Johannes' photos.

Shown below is a small selection of photographs, taken by Johannes Schwartz in 2005 for Driekoningenavond (the actual series of photos was much larger). Overall concept, typographic background and placards by us. (And while we're at it, we would like to thank the actors, the people who did the make-up, and Johannes' assistants). 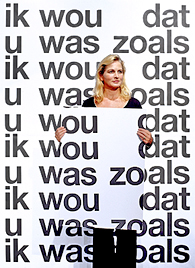 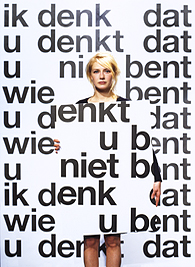 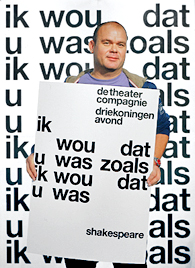 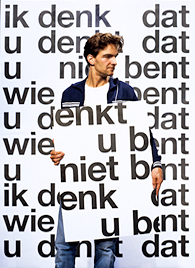 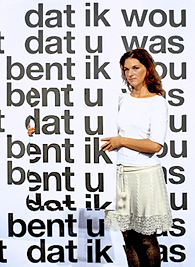