The play Ajax, based on the classic Greek text by Sofokles, was a co-production between two Amsterdam theatre groups: De Theatercompagnie and Toneelgroep Amsterdam. It toured through the Netherlands throughout October, November and December, 2007.

The posters we designed for Ajax were quite atypical compared to the other posters we did for De Theatercompagnie. As a matter of fact, we don't consider Ajax to be part of the actual series at all. (To see the 'proper' series, as a whole, visit Gilgamesj, The Pillowman, Driekoningenavond, De Vrouw van Vroeger, Het Koude Kind, Peanuts, Het Wijde Land and De Wilde Eend).

Searching for a solution, we quickly realized that we didn't want to mix our own textual approach with their photography. We wanted to avoid to turn this into some kind of hybrid, crossover thing. Besides, we understood that the moment we would combine our typography with their glossy, celebrity-driven brand of photography, the text would suddenly be degraded into some kind of secondary matter, into captions or subtitles. We didn't want that.
So instead of combining two concepts, we wanted to do something completely different. We decided to just use the given photograph, albeit in a very graphic, dry way. We stripped it from its full-colour celebrity gloss, and surrounded it with empty space, to minimize its theatrical impact.
The photograph that was supplied to us (taken by Jasper Zwartjes) showed one of the actors wearing a knitted cap, pulled close to his eyes. In the Dutch context, this image is an obvious reference to the well-known logo of Ajax, the Amsterdam football club; a logo that shows Ajax, the Greek god, wearing a Trojan war helmet, the visor right above his eyes.
Personally, we would have never chosen this reference. But since the photograph was a given, we had to roll with it. So we decided to play along with the football reference, and came up with a poster series printed in various combinations of red and white, the colours of Ajax the football club.

Shown below the series of posters we did for Ajax the play. In total, we designed four posters: two A2-sized posters and two A0-sized posters. The colours used were red on white, black on red, red on black, and white on red: 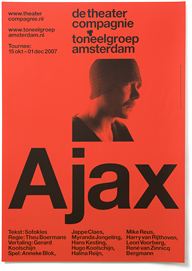 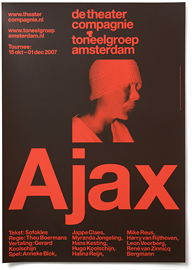 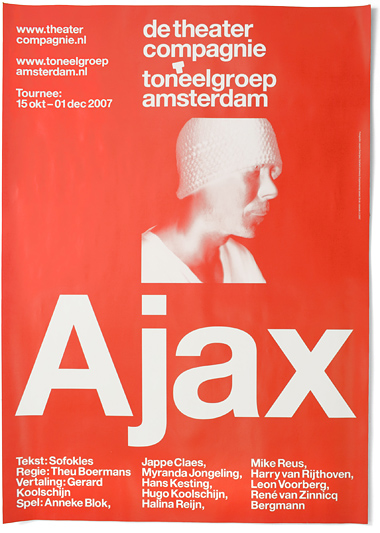 We also designed a simple A5 card, printed on both sides. We put a perforation in the middle, to break up the card in two A6 cards. Shown below the front and back of this A5 card: 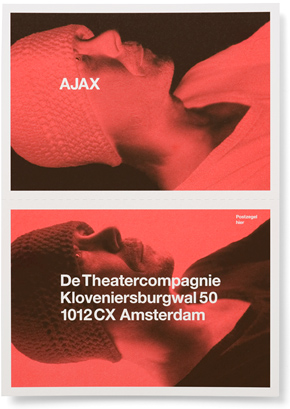 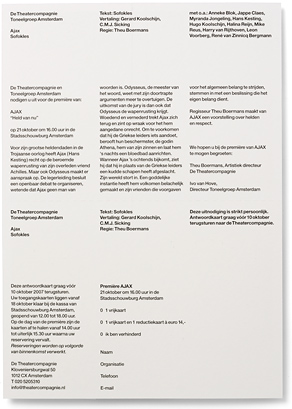 As usual, the brochure was an double-sided A2-sized sheet, folded to an A5-sided booklet. Shown below the front- and back of the booklet: 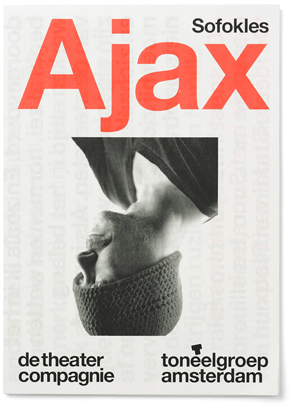 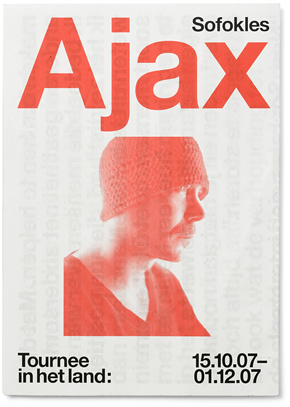 Unfolded, the booklet turned out to be a A2-sized poster. Shown the front and back: 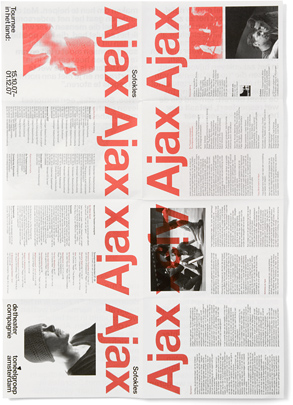 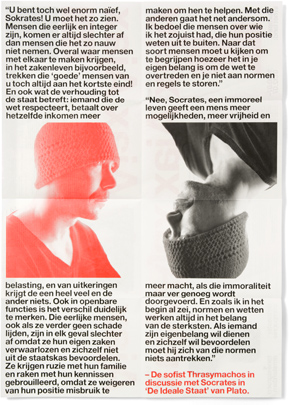 While designing this brochure, we began to play around a bit with the title of the play, and the photograph of the actor. By sometimes turning 'Ajax' on its head, we tried to refer to the idea of a 'fallen' hero, literally a hero 'on his back'. (After all, the actual character of Ajax is dead during the biggest part of the play).

For the play, we also had to design a t-shirt that was being sold during the tour, almost as 'band merchandise'. For the print of this shirt, we stuck with the idea of putting 'Ajax' on its head: 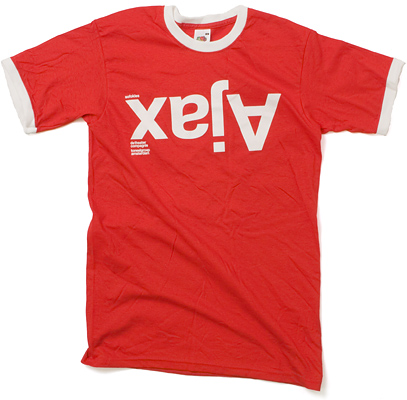 As was the case with all of the other plays (Gilgamesj, The Pillowman, Driekoningenavond, etc.), for Ajax we also had to design lots of tiny last-moment advertisements (mostly for magazines, newspapers and websites). We won't show all these small adverts here, but some examples can be seen at DTC / Banners. On that page, we show a couple of banners that were used on various theatre-themed websites (such as www.moose.nl).

Apart from a website banner, we also designed, for Ajax, an actual banner. When the piece landed in Amsterdam, it was played at De Stadsschouwburg, a big theatre hall. For the front of this hall we designed a banner of 13,5 x 1,5 meter (not shown here).