Earlier in 2018, we were responsible for a large retrospective at RMIT University in Melbourne. Titled ‘Superstructure’, this exhibition explored the notion of the city as a platform for language.

A couple of months later, we were invited by Atelier Impopulaire to create an intervention at the Volksbühne Pavilion in Berlin. In an attempt to further research the notion of the city as a platform for language, we decided to re-purpose Ian Svenonius’ soundtrack, and to create a pavilion around the theme of ‘Alphabet Reformation’. In that sense, the installation at the Volksbühne Pavilion can be seen as our response to Ian Svenonius’ soundtrack. 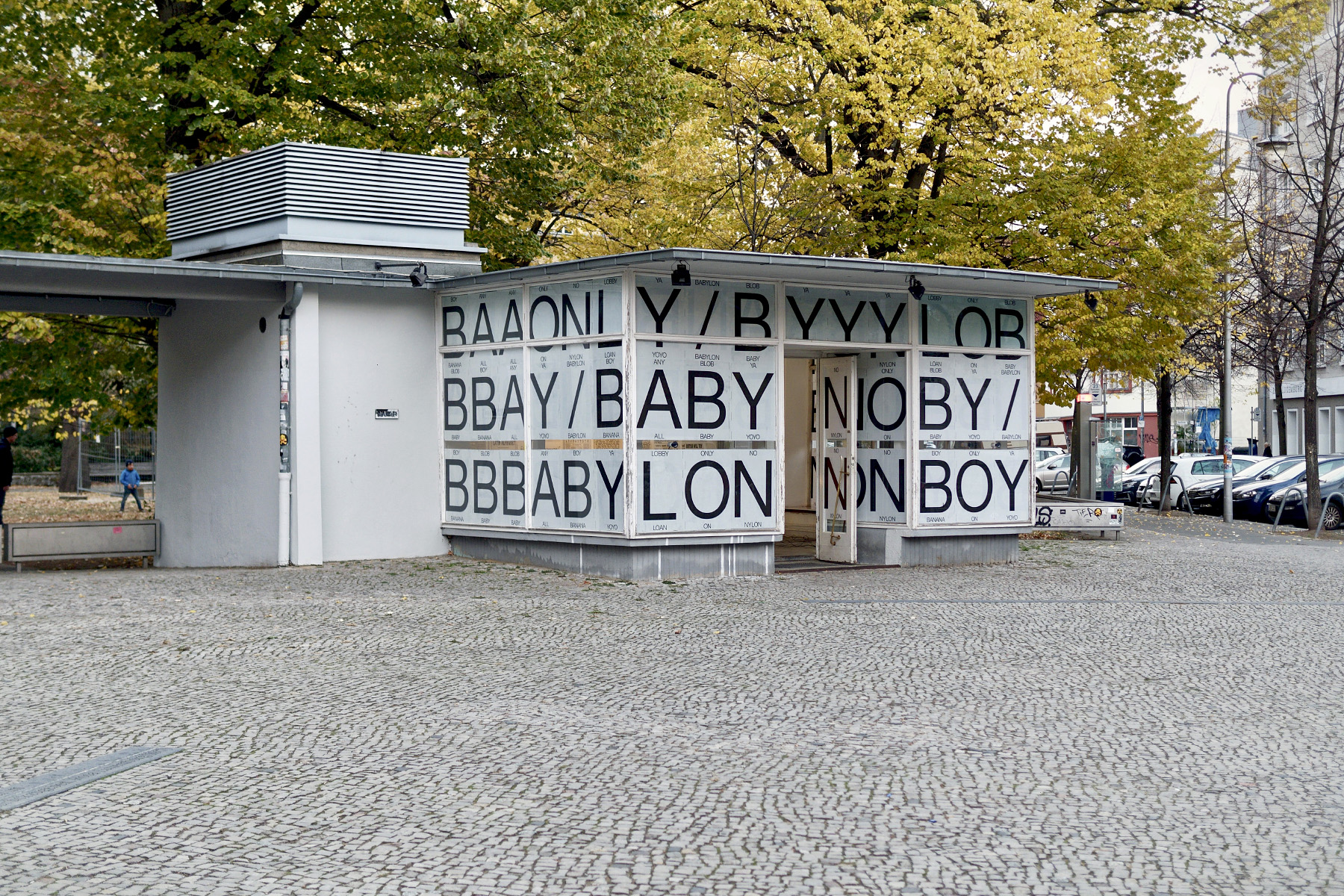 The resulting installation consists of a couple of elements. First of all, there’s Ian Svenonius’ actual soundtrack (or fragments thereof), as played through a low-fi sound/light-system, turning the pavilion into a giant speaker-box.
As the soundtrack consists mainly of the voices of people having a conversation about the alphabet (the fictional ‘Alphabet Reform Committee’), the initial effect is that of secret society setting up camp in the pavilion.
This gesture is only made stronger by the fact that the windows of the pavilion are (partly) blinded – obscuring the inside of the pavilion, while emphasizing the conversational voices and encoded light-flashes generated by the sound-system.

Referring to the way windows (of buildings under renovation) are often blinded by newspapers, the glass windows of the pavilion are covered with posters containing large letters – letters spelling out stuttering words, speculative acronyms, and random phrases.
Upon closer inspection, all these phrases (and non-phrases) are scrambled, distorted, fractured reflections of the word ‘Babylon’ – linking the pavilion to its architectural environment (the Rosa-Luxemburg-Platz), by creating an abstract conversation with the nearby ‘Babylon’ cinema.
This scrambling of a historic street sign (the manner in which the word ‘Babylon’ is reconfigured again and again) represents a very concrete way to “reform the alphabet”: by walking around town, and by reading, re-reading (and misreading) the juxtaposed signs and slogans in the streets, the Benjaminian flaneur is actively reforming the alphabet, while drifting through the city. (As Walter Benjamin said: “Through its street signs, the city becomes a linguistic cosmos”).

Meanwhile in the pavilion, the fictional ‘Alphabet Reform Committee’ is still setting up camp, charging the space with ongoing conversations, and morse-code-like light-flashes. A militant manifesto is pasted on the door, while press-conference-style tables are filling the floor.
The circuit-like sound/light-system (with add-on letters, looking like a scrambled alphabet itself) is casually installed at the tables, not unlike the impromptu preparations of a séance – a spatial Ouija board for occult activists.
In the back of the pavilion, newsletter articles (about historical cases of alphabet reformation) are pinned to the wall, creating a graphic backdrop to this fictional meeting. 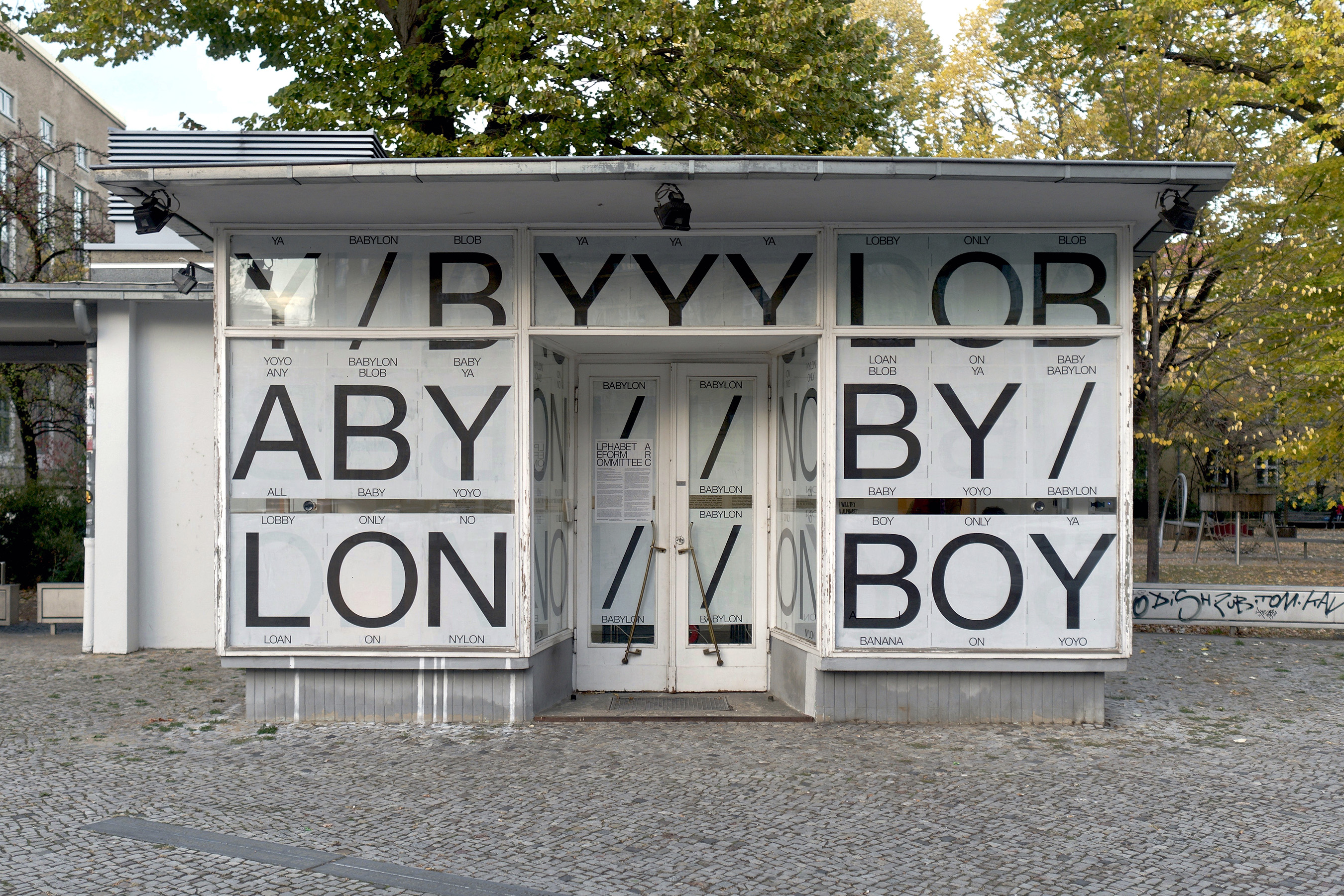 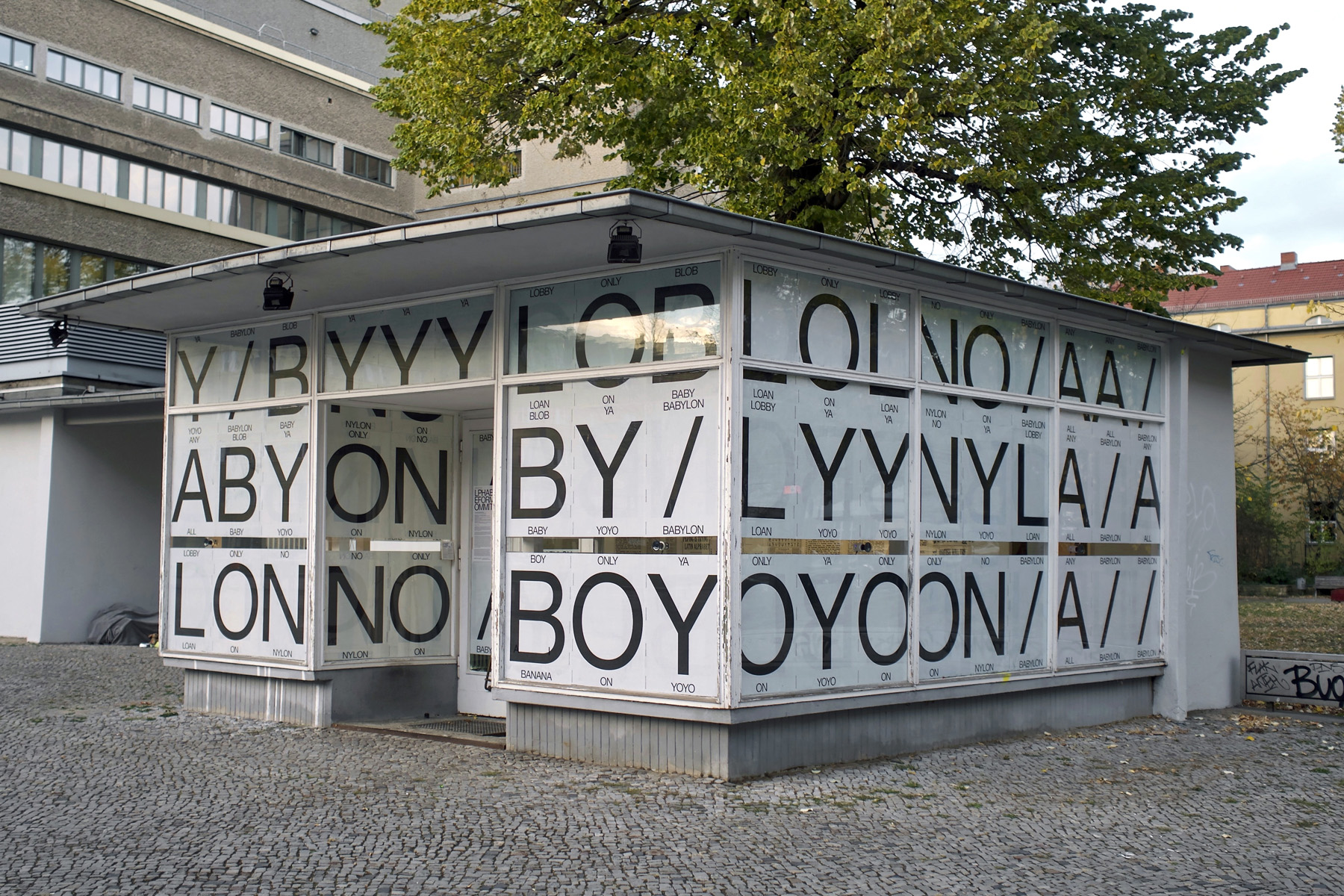 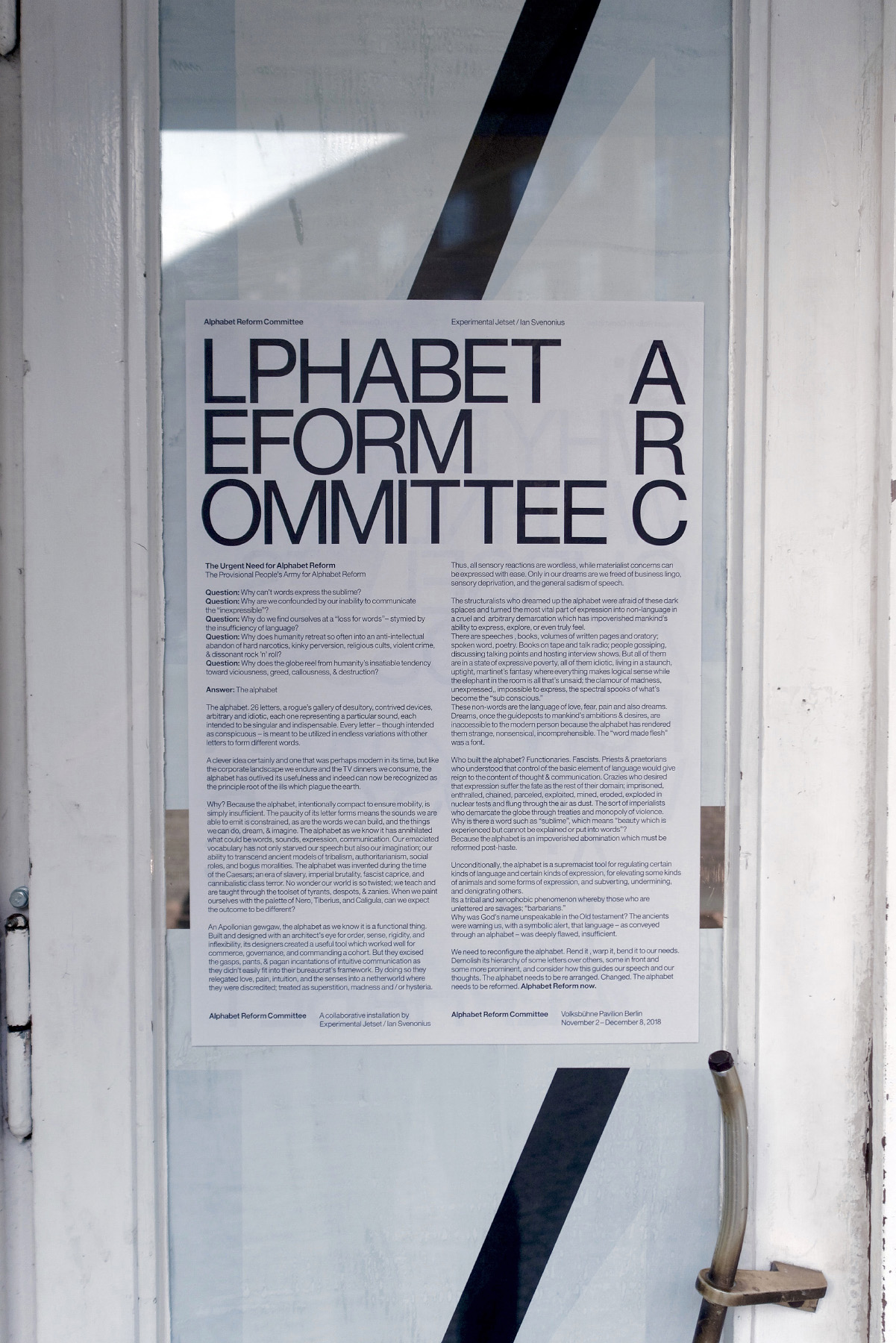 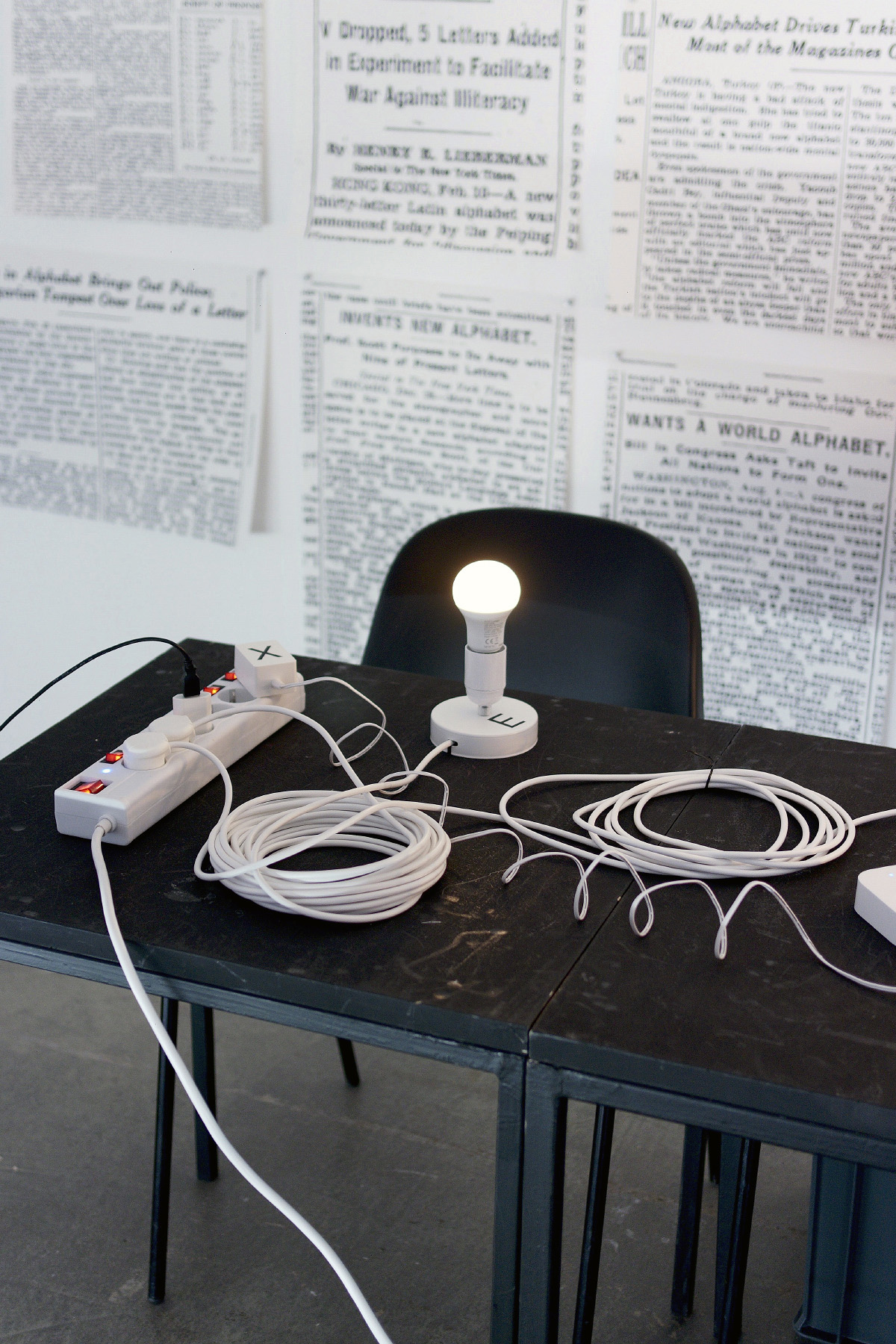 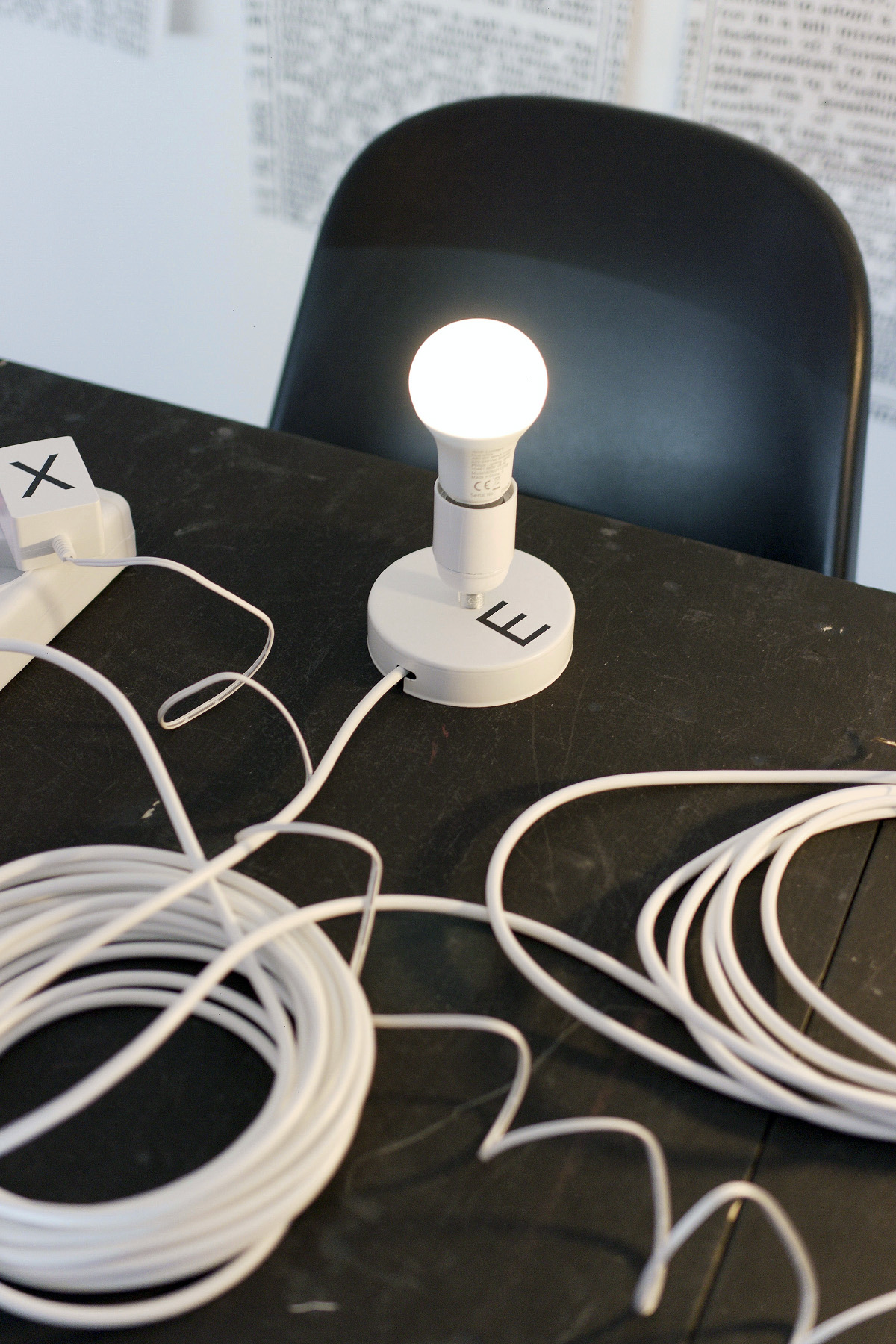 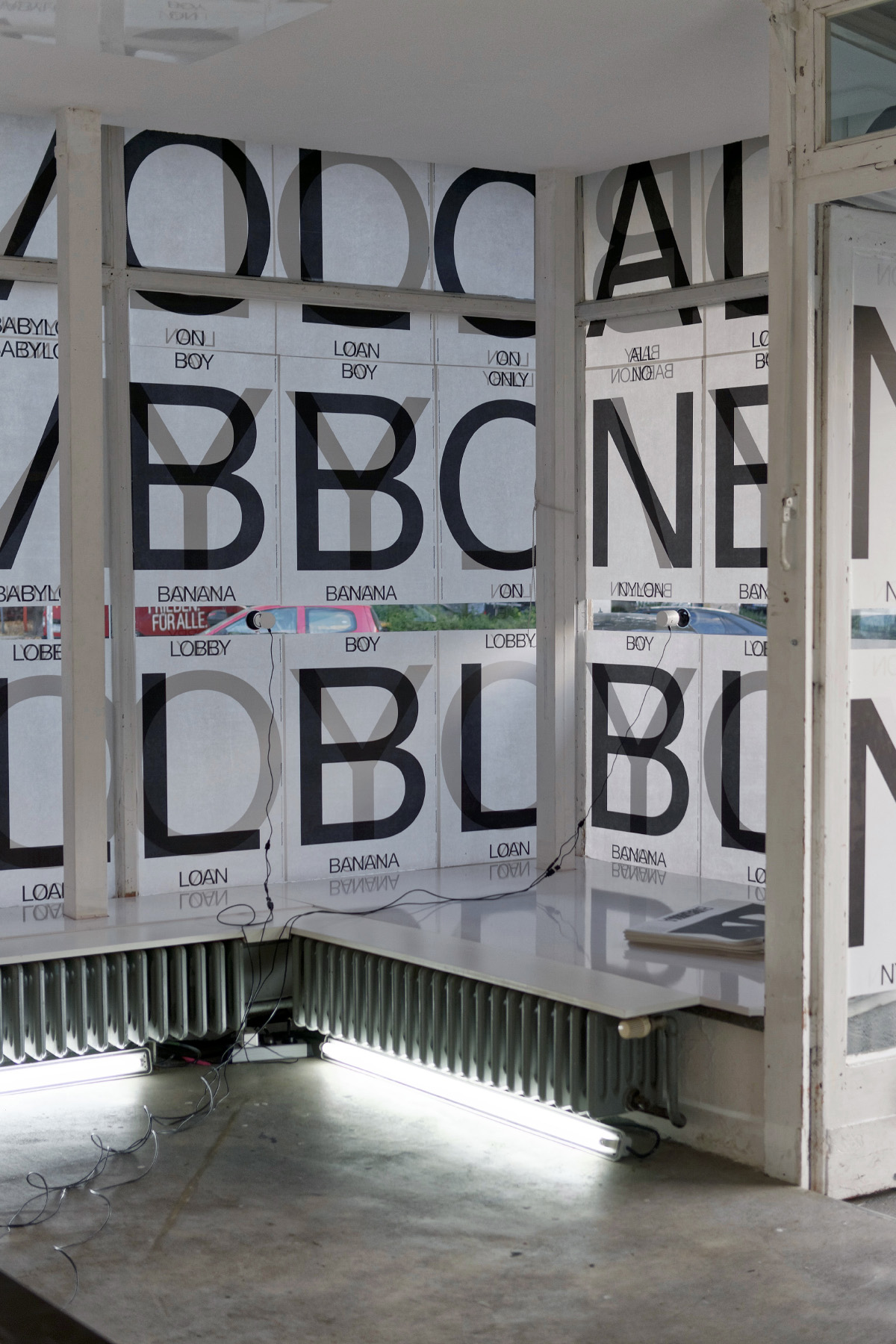 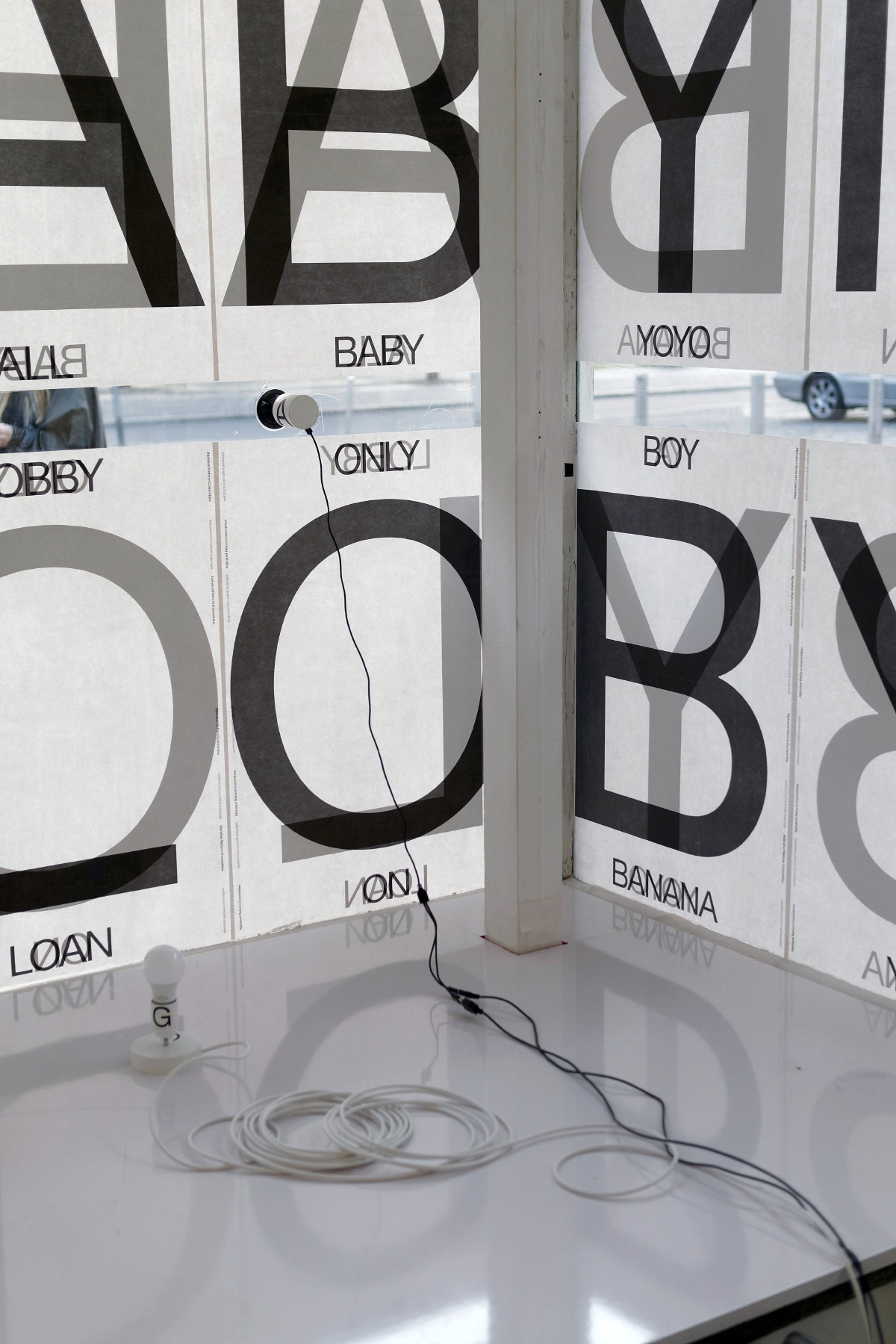 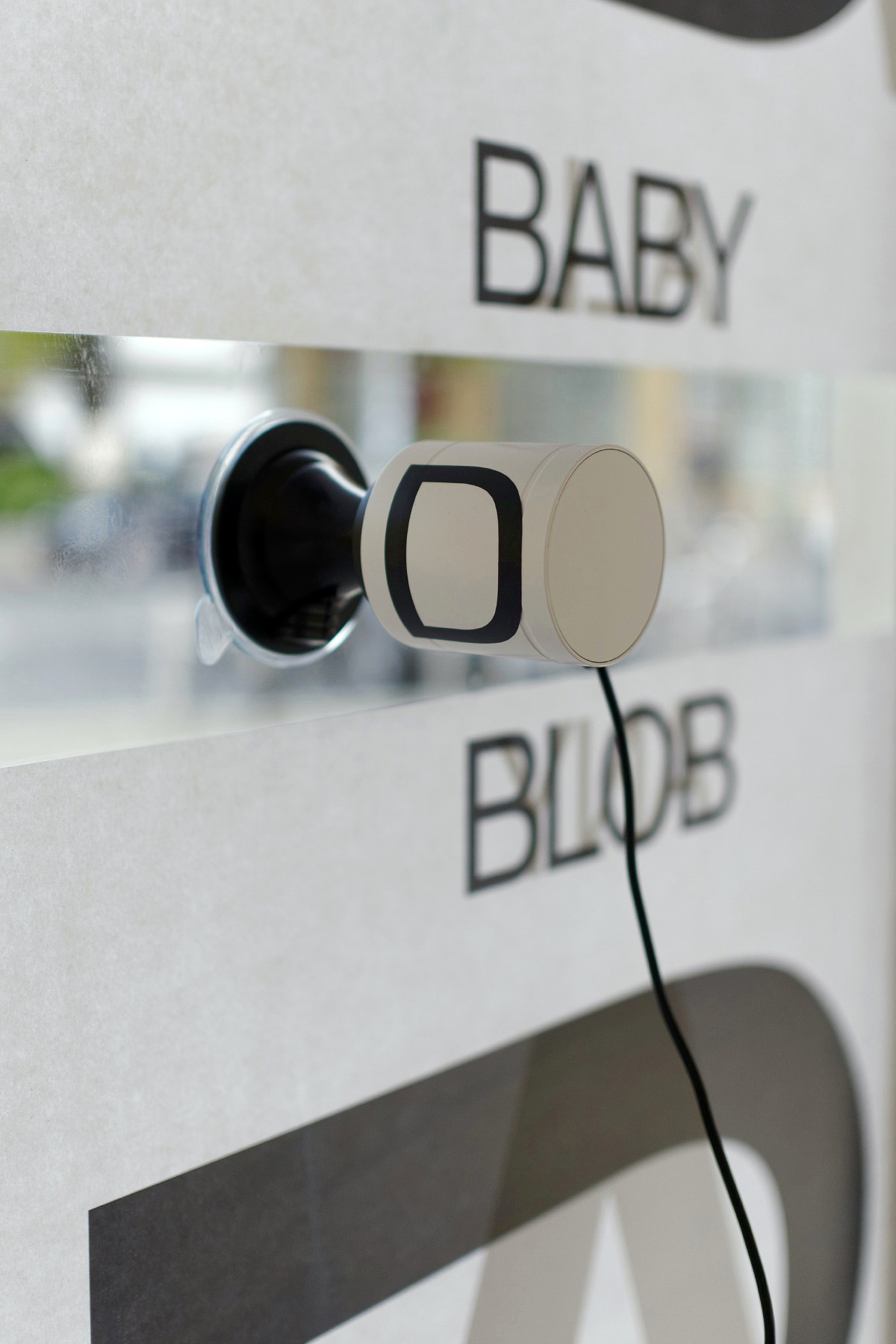 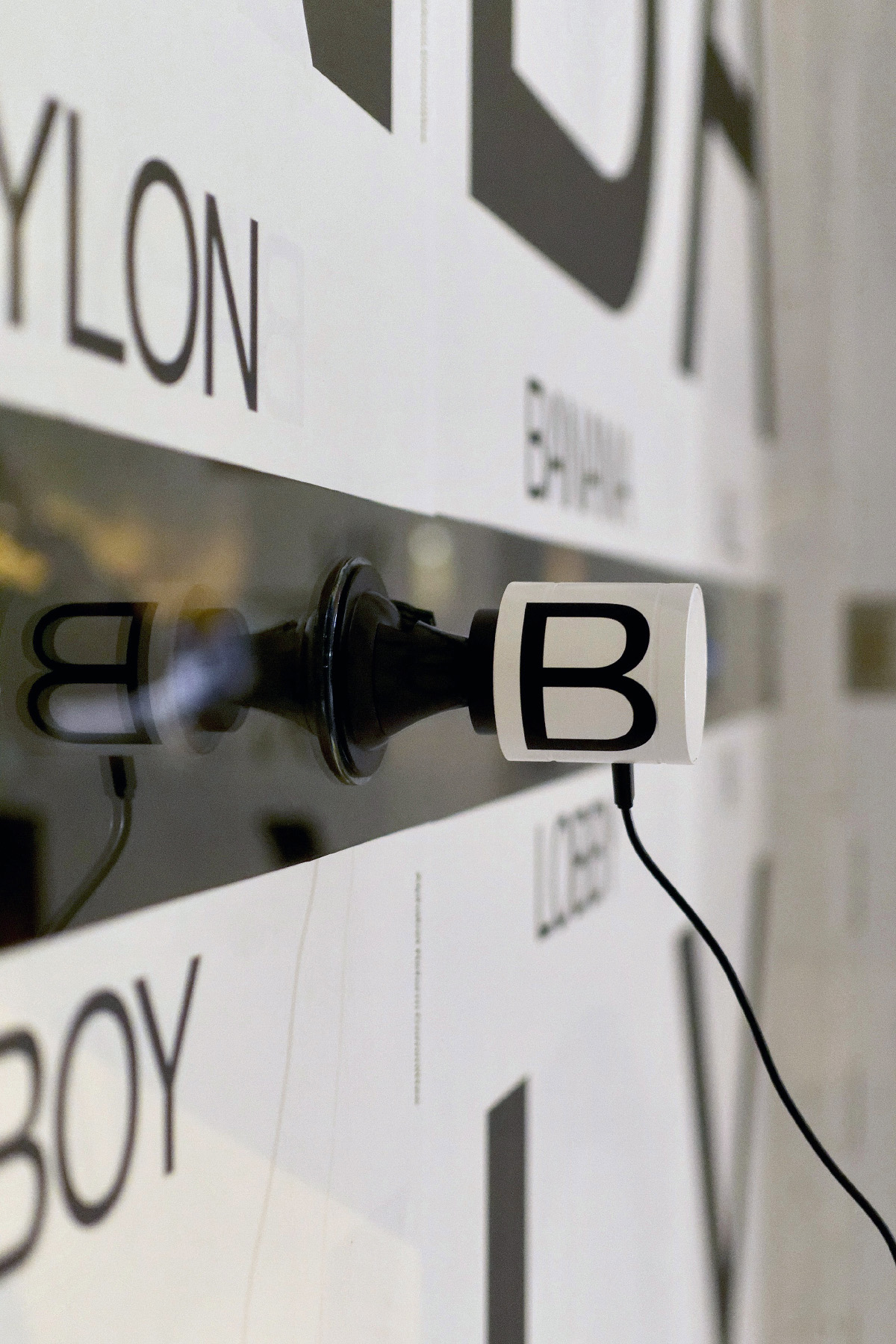 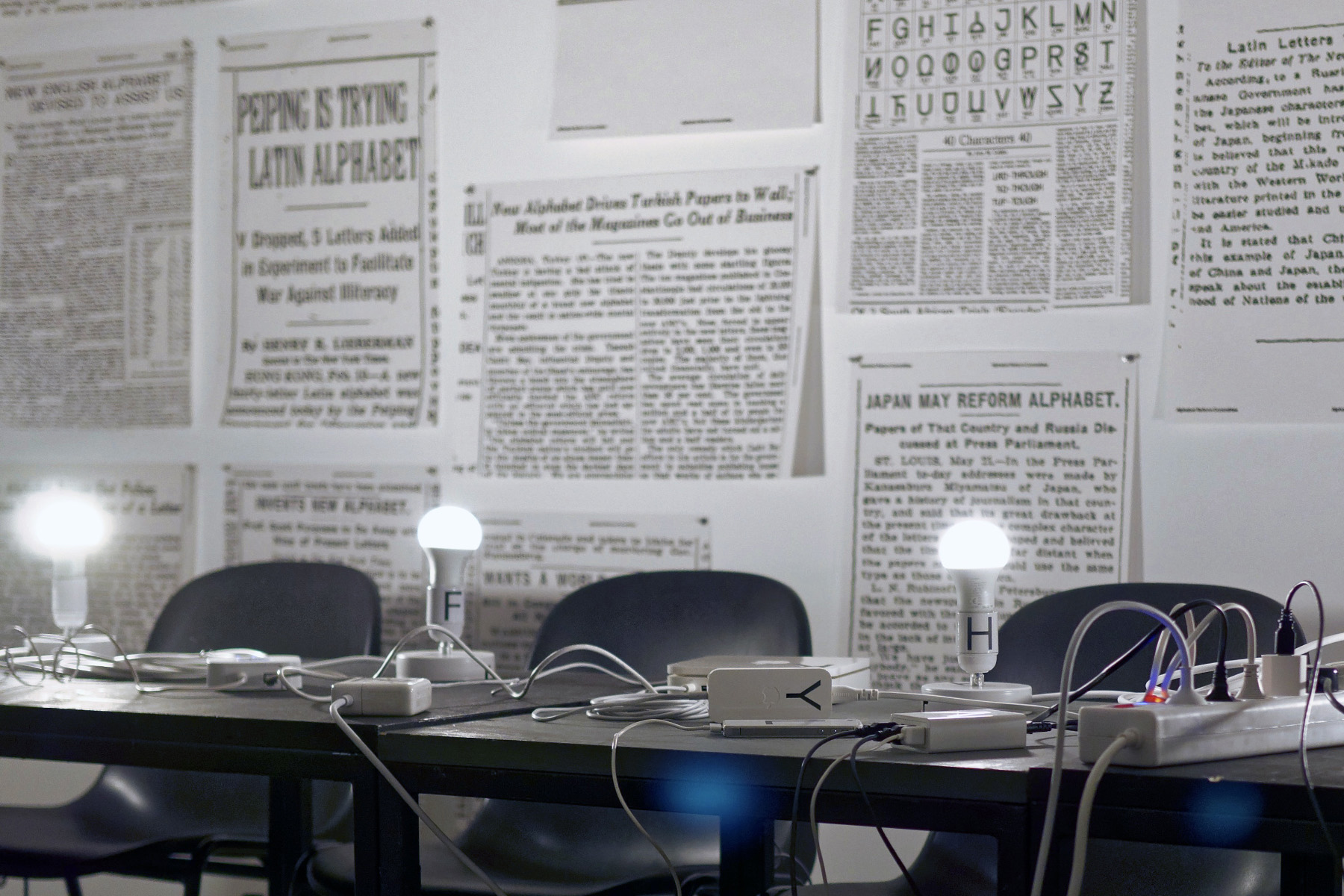 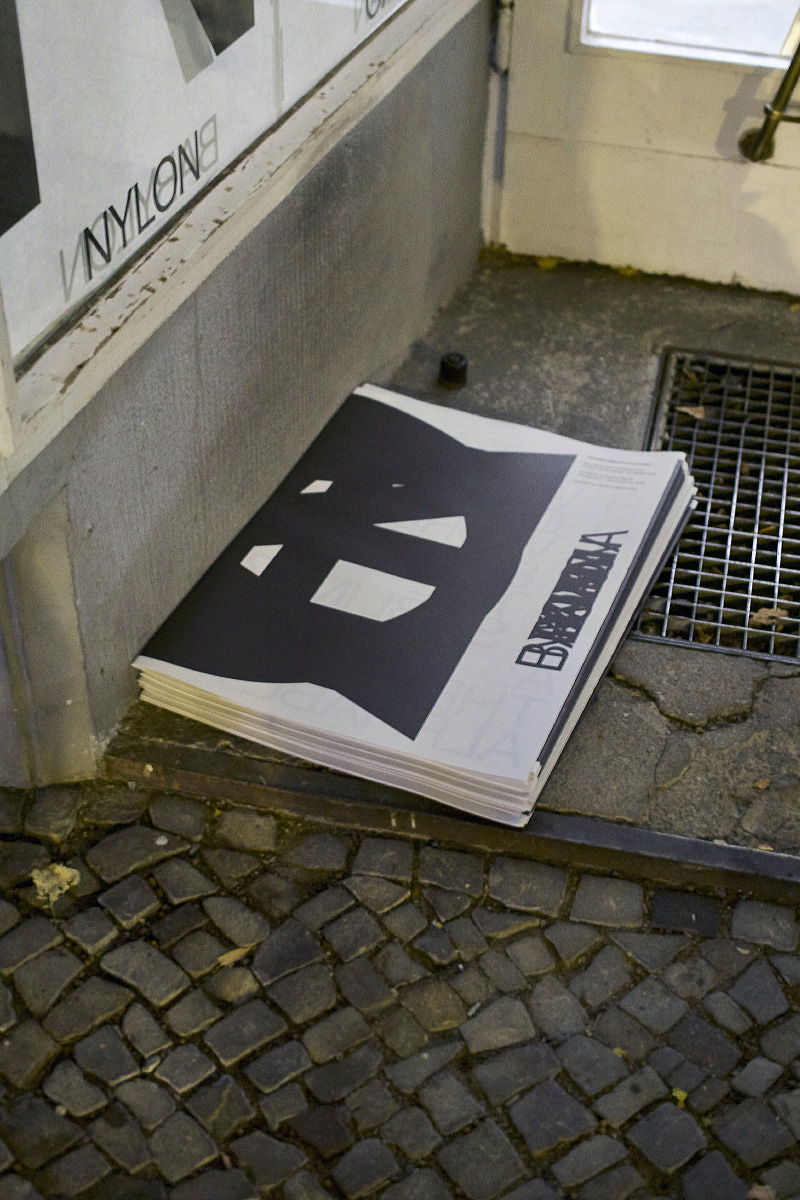 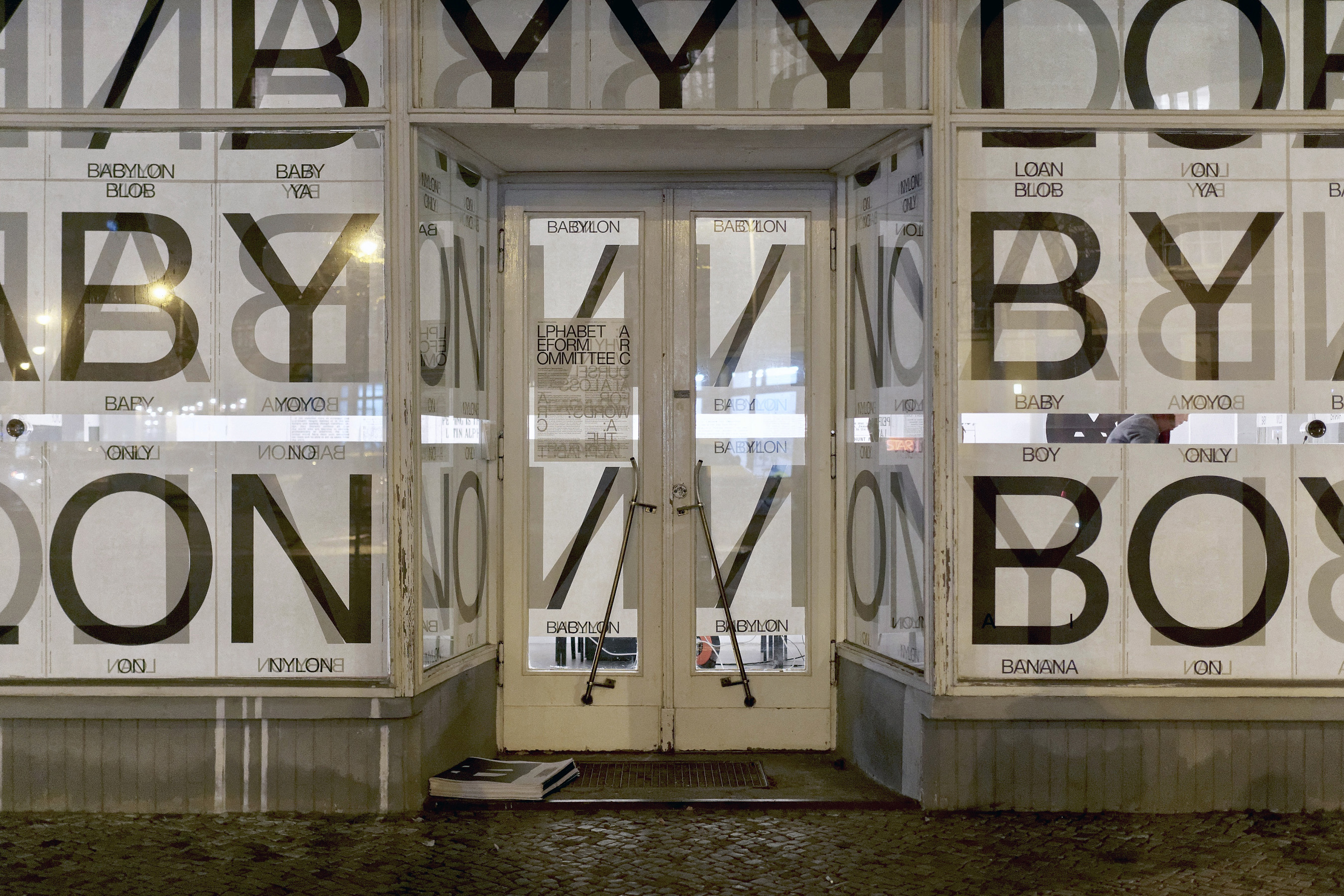 Also part of the installation is a broadsheet newsletter, distributed to visitors of the pavilion. The newspapers consist of the same posters (B–A–B–Y–L–O–N) that are also pasted to the windows – that way, the newspaper becomes a toolkit for the reader, to re-purpose the word ‘Babylon’ for him/herself.

For the opening of the pavilion, the posters are also pasted throughout the streets of Berlin – like a typographic virus spreading from the pavilion, and spilling into the streets (to speak with Burroughs: “Language is a virus from outer space”).

On the occasion of the installation, Ian Svenonius’ soundtrack also appears as a 7-inch single, released by Experimental Jetset.
A related box-shaped multiple (functioning as a ‘mini-archive’ of sorts) has been published as well, in a limited edition of 50.

Alphabet Reform Committee can be seen until December 8 December 29, 2018 (extended) at Rosa Luxembourg Platz, Berlin. Every Saturday the pavilion will be open, and free newspapers are available as long as supplies last.