We Are The World
Dutch entry / Venice Biennale

In 2003, we designed the catalogue, graphic identity and sign system for ‘We Are The World’, the group exhibition that was held at the Dutch Pavilion during the Venice Biennial (Biennale di Venezia), taking place between June 15 and November 2 of that same year.

The curator was Rein Wolfs, the participating artists were (in alphabetical order) Carlos Amorales, Alicia Framis, Meschac Gaba, Jeanne van Heeswijk and Erik van Lieshout.
Rein Wolfs proposed the title, ‘We Are The World’, as it was his intention to turn this exhibition into a clear and optimistic statement about multiculturalism in the Netherlands today. In fact, of the five chosen artists, only two (Jeanne van Heeswijk and Erik van Lieshout) were born in the Netherlands; the other artists were born in Mexico (Carlos Amorales), Spain (Alicia Framis) and Benin (Meschac Gaba).
The exhibition intended to juxtapose different notions of cultural diversity, politics and art. At the same time, the Biennale itself is also a place where topics such as nationality and culture come together. So for this assignment, we wanted to find a way to combine all these different elements, preferably in a tight and idiosyncratic graphic system.

Thinking about ways to combine these notions of nationality and art, we arrived at the idea of using inkblots. We realized that the inkblot aesthetic could easily refer to the physical shapes of nations, and the way in which countries are graphically represented on maps and globes.
At the same time, the inkblot refers to an almost archetypical idea of modern art. Abstract paintings, and then especially Pollock's drip paintings, occupy quite an important place in modern pop consciousness, and the amorphousness of paint plays an interesting psychological role in this. The archetypical role of blots, drips and stains is also acknowledged in the art world itself, for example in works such as Art & Language’s ‘Portrait of V.I. Lenin in the Style of Jackson Pollock’ (1971).

Added to the above associations, we thought that the inkblots could also refer to the famous Rorschach test, a psycho-analytical model in which a standard set of symmetrical inkblots is presented to a subject who has to describe what these inkblots suggest (thus projecting his/her identity onto the abstract shapes).
By showing countries as inkblots, we wanted to suggest that the idea of nationality is most of all a psychological construction, comparable to the mechanisms of projection at work at the Rorschach test.

In a very good article about the ‘We Are The World’ catalogue (an article that appeared in the issue 111 of UK magazine Grafik, November 2003), Angharad Lewis points out that Herman Rorschach's father was in fact an artist, and that this was also Hermann's intended career path, until he became interested in psychiatry. A fact we weren't aware of, but which certainly thickens the plot.

The 'We Are The World' catalogue consists of a gatefold cardboard sleeve (in its folded form approximately 22 x 31 cm), unfolding in two ‘pockets’. The first pocket contains an A4-sized booklet of 50 pages, featuring documentation about the participating artists, printed in black and white. The second pocket contains a set of five A2-sized posters (folded to A4), each one featuring a full-colour work by the artist on the frontside, and a black and white (self-)portrait of the artist on the back. The gatefold catalogue as a whole is packaged in a transparent, plastic sleeve.

We designed the publication in such a way that when opening the catalogue, the reader makes a movement from the biggest to the smallest part: from the earth as a planet, to the world as a group of countries, to one specific nation.
On the front of the gatefold sleeve, a large inkblot is shown; an inkblot that, certainly in combination with the title, seems to represent a planet. When opening the gatefold sleeve, the center spread shows a world map made up of inkblots. When removing the publication from the pocket of the sleeve, the frontside of the publication shows an inkblot in the shape of the Netherlands. In other words, in three steps the reader moves from the world as seen from space, to one particular country.
(And since the map of the Netherlands itself also consists of inkblots, inkblots similar to the one shown on the cover of the gatefold sleeve, the suggestion is that every country consists of different planets. Thus, there is a movement from the biggest to smallest, and back again to the biggest, in a continuos loop). 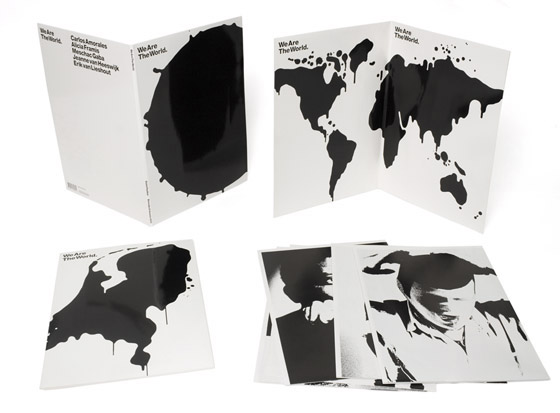 As we already mentioned, the booklet showing the documentation about the artists is basically a A4-sized 50-page publication, printed in black and white. On the (laminated) cover, an inkblot in the shape of the Netherlands is shown. The inside pages feature photographs of the artists’ past projects, essays on the individual artists, and their biographies. The body text is set in two columns, while the biographical information is set in a smaller typeface, in the margin of the page, as a collection of footnotes.
The publication is held together with two black staples. Shown below the back- and frontcover, and a selection of spreads: 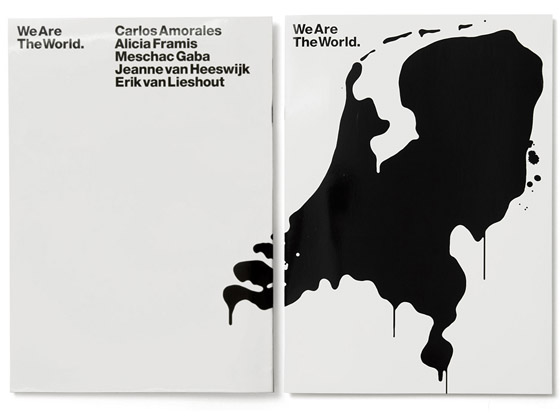 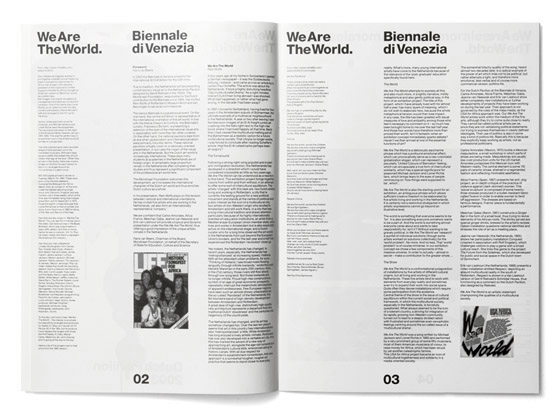 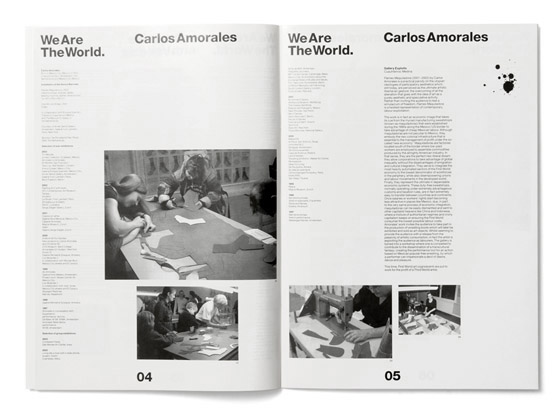 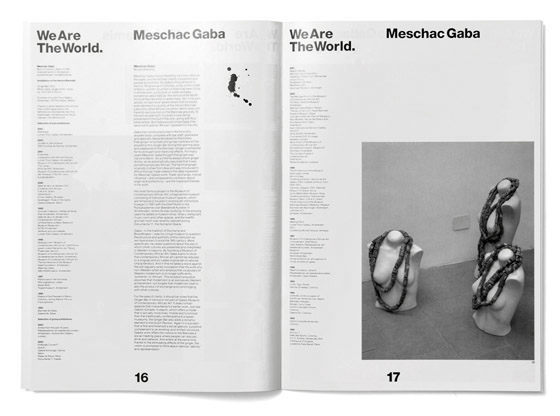 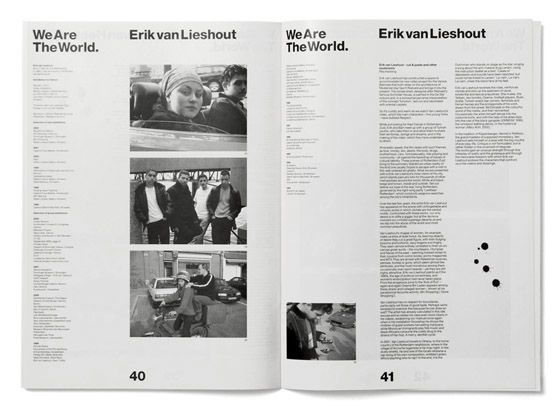 The heart of the booklet is a 12-page section entitled ‘Rorschach Geography’. Since this section is placed exactly in the middle of the booklet, it can pulled out as a separate booklet.
‘Rorschach Geography’ shows the five native countries of the participating artists (respectively Mexico, Spain, Benin, and the Netherlands times two) as a series of Rorschach inkblots. As we explained before, by linking the notions of cartography and psycho-analysis, we wanted to suggest that the idea of nationality is most of all a psychological projection.

It's interesting how this section came about. Originally, the booklet was intended to contain a large, 12-page essay on multiculturalism. At the last moment, the curator rejected this text, which left us with 12 empty pages, one day before it was due at the printer. “You’ll come up with something”, the curator said to us. Which we did. Shown below the complete ‘Rorschach Geography’ section: frontcover, the five inside spreads, and the backcover. 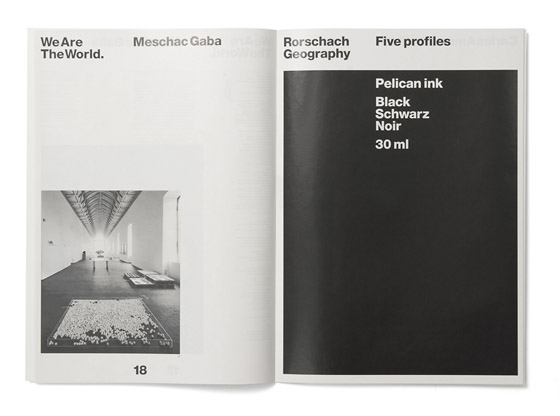 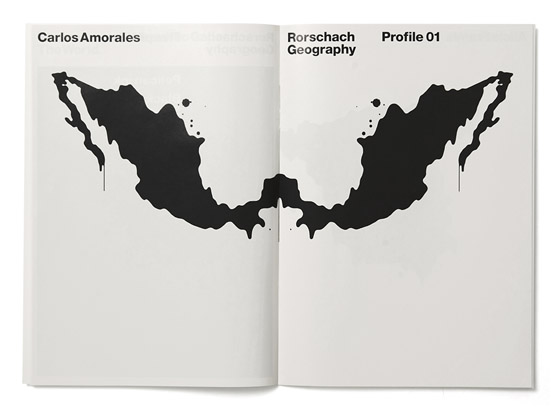 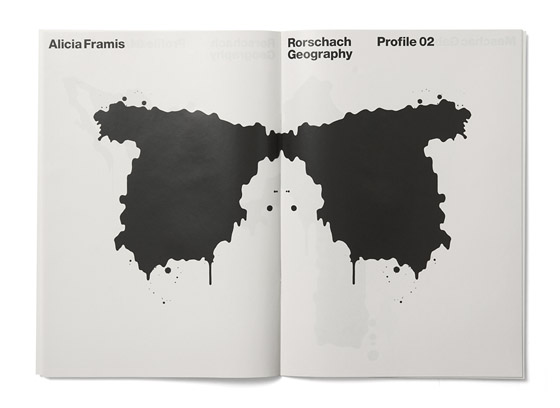 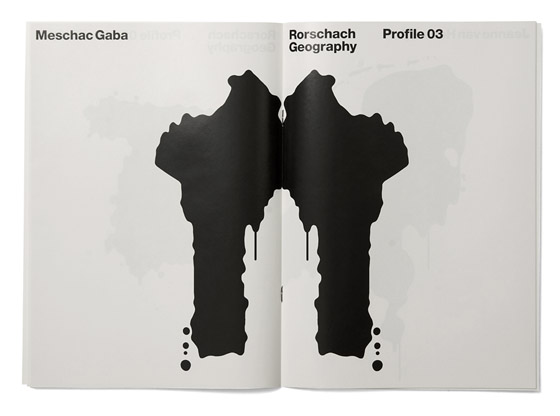 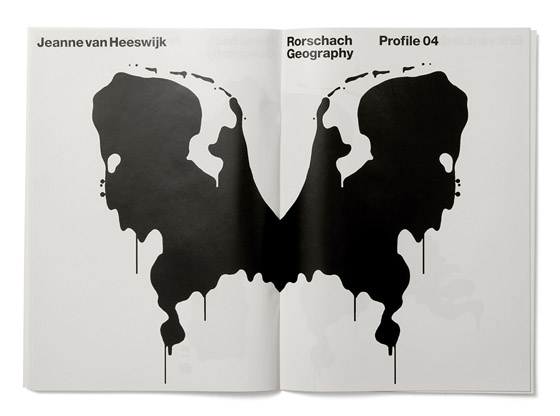 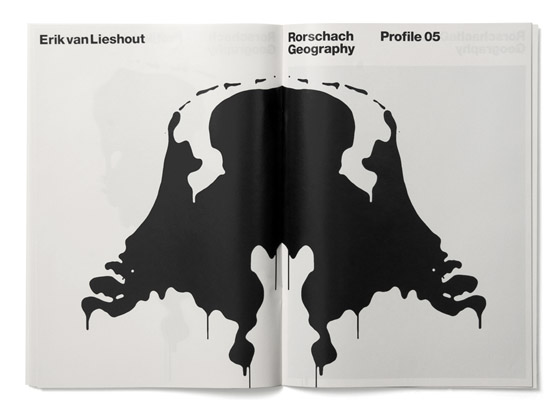 Another important part of the catalogue are the posters. Basically a set of five A2-sized posters, folded to A4, this section of the catalogue is the only part that contains full-colour printing.

On the frontside, these posters show the work of the five artists. These images are printed in full-colour to underline the fact that these posters are in fact contributions by the artists (rather than documentation about the artists).
On the back, we show the (self-)portraits of the artists, together with their names. We used the portraits on one-fourth of the poster, in such a way that, in their folded form, the sheets resemble full-page portraits.
Unfolded, the sheets become posters for the individual artists. When put in the correct (alphabetical) order, the five posters together form one piece, a continuous strip of posters:

Back to the catalogue as a whole. As we already mentioned, the cardboard cover was modelled after a gatefold sleeve. As a matter of fact, in the first sketches that we made, the catalogue looked exactly like the gatefold cover of a square 12'' double album. The idea of a catalogue in the form of a record sleeve was something we were seriously thinking about, partly because we thought that a record sleeve would be a nice reference to ‘We Are The World’, originally an Eighties pop song.
But after we produced some models, we decided that an album sleeve would be too kitschy, as the sleeve would suggest too strongly that it contained an actual record (which would be a false suggestion).
To solve this problem, we simply cut off a strip of cardboard from one of our models, in such a way that it was transformed from a square to a rectangle. Suddenly, the whole model made sense. While the proportions now referred to normal book formats, the overall mechanics (especially the folding) still referred strongly to gatefold record sleeves.
On the cover, we left a hidden clue referring to the original square form of the sleeve. The inkblot on the front has in fact the same size (and colour) as a 12'' vinyl record. A piece of this record is cut off; we hoped that, subconsciously, by completing the circle, the reader would also complete the square, and somehow would envision the initial sleeve, almost as a ghost from the past. We know, it's a long shot, but worth trying.

The combination of record sleeves and inkblots still makes a lot of sense to us. When we did research for this project, we found (in our own record collection) a lot of album sleeves featuring inkblots. A few examples are Faith No More’s ‘Introduce Yourself’ (Slash 1987), ‘Variations IV’ by John Cage and David Tudor (Everest 1964), and ‘Free Jazz’ by Ornette Coleman (Atlantic 1961). In fact, this last album contains, in its inner-sleeve, a painting by Jackson Pollock (visible on the front through a small cut-out window), making the circle (between record sleeves, inkblots and modern art) complete.

On the last page of the booklet, we decided to put a short quote, taken from a book from our own collection (‘Apocalypse Culture’, edited by Adam Parfrey, published by Feral House, 1987). It’s a quote that suggests that Michael Jackson is in fact the Anti-Christ, and that clues supporting this statement are hidden in the lyrics of ‘We Are The World’, the pop song. The quote in question is of course a totally nonsensical, paranoid blurb; but we liked the idea of ending this (overall optimistic) booklet on a slightly sinister note: 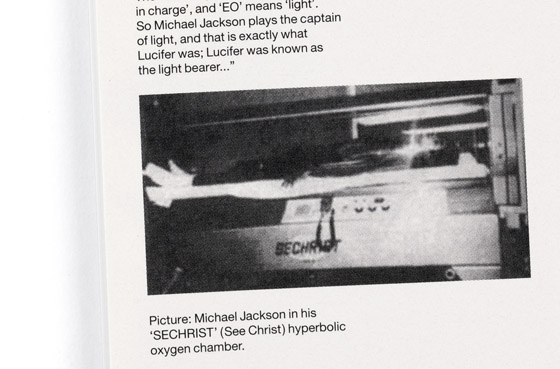 For the We Are The World project as a whole, we also designed a large amount of related objects (see WATW / Printed matter). A year later, a ‘remixed’ version of the exhibition was on display at the Museum Boijmans Van Beuningen (WATW / Rotterdam edition).