Stations of Tourettes
Series of buttons 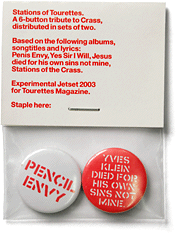 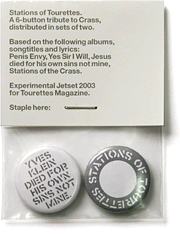 Tourette's was the name of an art magazine edited and published by Will Holder (Goodwill) and Stuart Bailey, two British graphic designers living in Amsterdam, who, at that time, were working together under the name Will Stuart. The first issue of Tourette's was just a regular, printed magazine; the second issue was a week-long art festival that took place at exhibition space W139 (Amsterdam), featuring lectures, performances, screenings and concerts. It was quite a wild week.

We were also asked to contribute to the festival. Not the performing types, we decided to play it safe, and to limit ourselves to handing out some button badges we produced especially for the festival, on our own button machine.
Since the overall theme of the festival seemed to revolve around the idea of tributes (to people as diverse as Yves Klein, Wyndham Lewis, etc.) we decided to do our own tribute, to classic English anarcho-punk band Crass. Great admirers of their idiosyncratic agit-prop/agit-pop aesthetics, we thought they would be the best subject for a button tribute.
So we took some typical Crass song titles, and modified them in such a way that they would also refer to the context of Tourette's. We changed 'Stations of the Crass' into 'Stations of Tourettes'; 'Yes Sir I Will' into 'Yes Sir Goodwill'; 'Penis Envy' into 'Pencil Envy' (referring to art criticism in general); and 'Jesus died for his own sins not mine' into 'Yves Klein died for his own sins not mine' (referring to Will and Stuart's obsession with Yves Klein).

Most of the buttons were black & white (referring to the typical Crass aesthetics). But we also did a few 'limited edition' coloured versions. For example, for the Yves Klein night, we made an 'International Blue' version. The night Bill Drummond (from the KLF foundation) came to paint a wall grey, we made a 'International Grey' version. And when Paul Elliman did a lecture about fireworks, we did a 'Firework Red' version.

We distributed the buttons in sets of two. The cardboard packaging was inkjet printed. The plastic bags were sealed and stapled by hand.