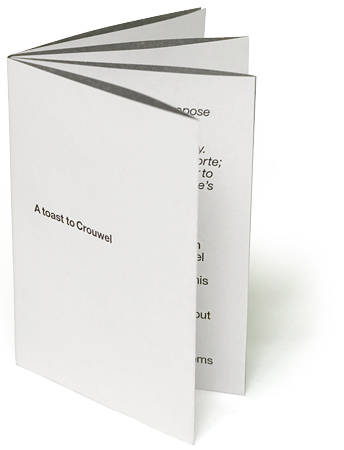 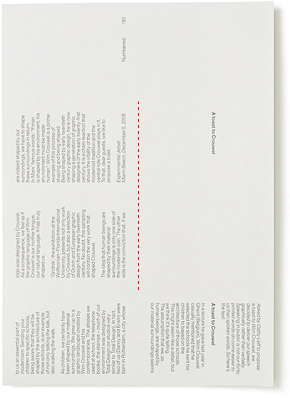 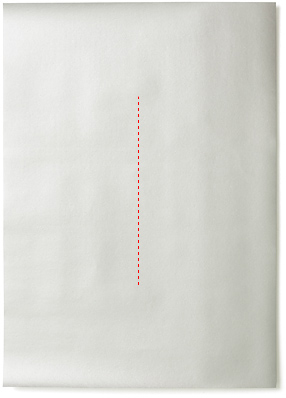 Near the end of 2008, we were invited by The Wolfsonian, a museum located in Miami, to attend a dinner that would be held on the occasion of two related events: Wim Crouwel's 80th birthday, and the opening of 'Gridnik', an exhibition that would take place between December 5, 2008, and March 10, 2009. Subtitled 'Wim Crouwel and Modern Typography', 'Gridnik' was an exhibition featuring work by Crouwel, combined with pieces drawn from the Wolfsonian collection.

The dinner took place at December 5, 2008, and we were asked to prepare a short toast for the event. Instead of a speech, we created a small booklet, containing a text expressing our admiration for Crouwel. The booklet was a small, A7-sized publication that we printed on our own laserprinter, in a limited edition of 80. The booklet was handed out to all attending dinner guests.

The booklet was actually just a single sheet of A4, printed on one side, and folded into an A7-sized booklet of 8 pages. It's actually a really interesting way of folding: you make a slit in the middle of a single sheet, and then just fold the sheet a couple of times, until a small booklet appears. Shown below the unfolded sheet, front- and back. (As you see, we used paper with a silver back). The red line indicates where the slit should be placed. It's a system of folding that we discovered in the beginning of the 90s, when we came across a punkzine that was folded that way. It's such a beautiful system; you don't need staples or glue: you are binding the zine while you are folding it. In the mid-90s, we actually used the system quite often for our own zine, PHK. If we ever have the time, we will dig deep in our zine archive, to find the title of the original zine that gave us this idea.

By the way, here's the text that we wrote:

Asked by Cathy Leff to propose a toast to Wim Crouwel, we decided to deliver our speech graphically rather than verbally. Speaking in public is not our forte; printed words do come easier to us than spoken words. So here's the text:

A toast to Crouwel

In a lecture he gave last year in Ghent (Belgium), Wim Crouwel casually mentioned that he selected the schools he sent his children to based on the architecture of those schools. This might seem like a detail, but we think it's quite telling. The assumption that we, as human beings, are shaped by our material surroundings seems to us an essential part of modernism. Sending your children to specific schools, being aware that they will be shaped by the architecture of those schools, is an example of not only talking the talk, but also walking the walk.

As children, we certainly have been shaped by our material surroundings. We grew up in a graphic landscape created by Wim Crouwel and his contemporaries. The atlases we used at school, the telephone books, the stamps – much of our environment was designed by Total Design (or studios very similar to Total Design). In fact, two of us (Danny and Erwin) were born in Rotterdam, a city whose logo was designed by Crouwel. As a consequence, we feel as if the graphic language of Wim Crouwel is our mother tongue, our natural language. It has truly shaped us.

'Gridnik', the exhibition at the Wolfsonian–Florida International University, presents not only work by Wim Crouwel, but also a selection of Dutch and European graphic design from the early twentieth century. No doubt, this sampling will contain the very work that shaped Crouwel.

The idea that human beings are shaped by their material surroundings is only one side of the modernist coin. The other side is the conviction that if we are indeed shaped by our surroundings, we have to shape these surroundings in return. In Marx' famous words: "If man is shaped by his environment, his environment must be made human". Wim Crouwel is a prime example of this process of shaping and being shaped. Being shaped by early twentieth century graphic design, he is now shaping a generation of graphic designers of the early twenty-first century. It is a chain reaction that shows the vitality of the modernist tradition and the central role Crouwel plays in it. To that, dear guests, we like to propose a toast.

The booklet was published in a numbered edition of 80. Printed on our trusty Accel-a-Writer 3N laserprinter, and folded by hand. Thanks to the Consulates General of the Kingdom of the Netherlands, The Mondriaan Foundation and Cathy Leff, Donna Carter and Tim Hossler of the Wolfsonian for inviting us.