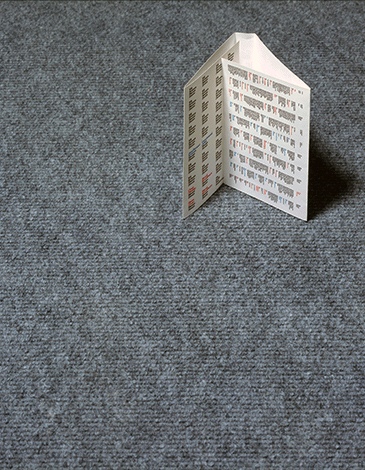 As we already mentioned elsewhere on this site (see Chaumont Lecture, Chaumont Shirt and T-shirtism), we were involved in a series of events that took place as a part of the Chaumont poster festival 2005, organized by Werkplaats Typografie, a post-graduate academy based in Arnhem.
To make a long story short, on the occasion of this project, Werkplaats Typografie published a book ('Dutch Resource', Valiz Editions), each chapter of this book edited and designed by a student of the Werkplaats. Basically, each student was asked to pick a Dutch designer or design group, and to use this designer or group as the subject for a single chapter. In other words, the finished book would be a publication about 20 designers, each one of the 20 chapters designed by a different student.
We were picked by (Werkplaats Typografie student) Karen Willey, who actually used to be one of our own students; we teach at the Gerrit Rietveld Academy, where Karen graduated before she went to Werkplaats Typografie. (To be honest, one of the reasons we participated in this whole project was because Karen was involved; we had an unlucky encounter with Werkplaats Typografie a few years before, so we were sort of hesitant to participate at first. To read about that unlucky encounter, go to Crouwelism).

Karen's concept for the chapter was quite simple (but very good): she didn't want to focus on our work itself, but more about everything around it. For example, when she visited us in our studio, she was quite enthusiastic about the maquettes (scale models) we always make of our designs; sketches and models that are actually a very important part of our working process. A good example of something that only exists in the 'periphery' of our design practice.
Another thing that Karen found quite interesting was the fact that our 'John & Paul & Ringo & George' t-shirt has been copied quite often lately (see T-shirtism); another example of something that isn't actually our work, but what is happening around it.

In short, Karen wanted to do something with these scale models, so she made a selection and asked Johannes Schwartz (a photographer we worked with before, see High Light and High Nature) to photograph this selection, resulting in a series of beautiful pictures.
Below you can see these pictures, in no particular order at all. Concept by Karen Willey, photography by Johannes Schwartz, and models by us.

These are scale models of two wooden structures that we designed for 'Now: 90 Years Pastoe', a group exhibition that took place in 2003 at the Centraal Museum (Utrecht). The installation we designed for this exhibition consisted of these two structures, covered with posters. Pastoe is a Dutch modernist furniture manufacturer, and the whole idea behind our installation was to transform the brand name Pastoe (which comes from the French word 'passe-partout') into the almost political slogan 'Pas Toe!', which means 'Apply!'. In a way, we were trying to construct a fictitious etymology, to reconnect the brand with its modernist roots. Something like that. Actually, the story is more complicated than that, but you get the idea. 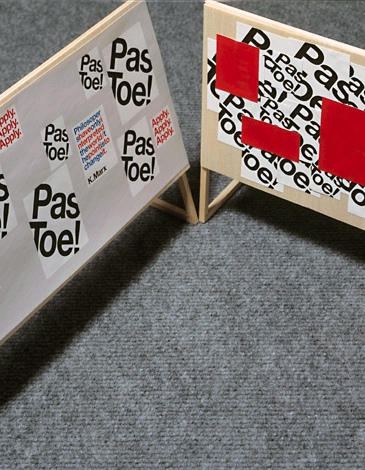 A small selection of actual-size sketches for a set of three telephone cards that we designed in 2004, for the KPN (Dutch Telecommunication Group), to celebrate the 150th anniversary of the KNMI (Dutch Meteorological Institute).
What we tried to do was to translate three given poems in a meteorological way. The full story can be found here. 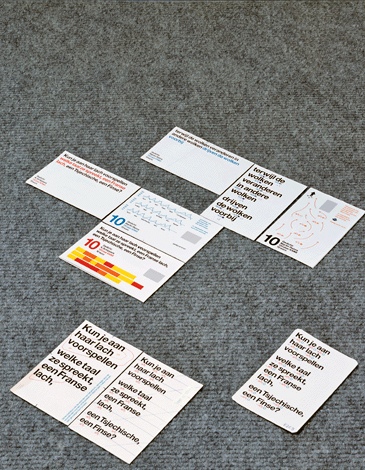 Shown below are scale models of tents we designed in 2003, when we were asked by Lowlands Pop Festival to design a pattern for one of their festival stages.
Lowlands is an alternative music event that takes place in a number of large tents on a terrain the size of a small village. Because of their size, these tents reminded us of giant warships; an association that was only reinforced by the almost military-type names given to these tents: 'Alpha', 'Bravo', 'Charlie', etc. We decided to design a pattern that was inspired by the phenomenon of 'Razzle Dazzle': an experimental form of camouflage painting used on warships during the first World War, when disturbing Op-Art patterns were used to confuse enemy ships. 'Dazzle Ships' is also the title of a 1983 album by OMD (Orchestral Manoeuvres in the Dark), which made the idea of designing a pattern like this even more logical in the context of a pop festival. 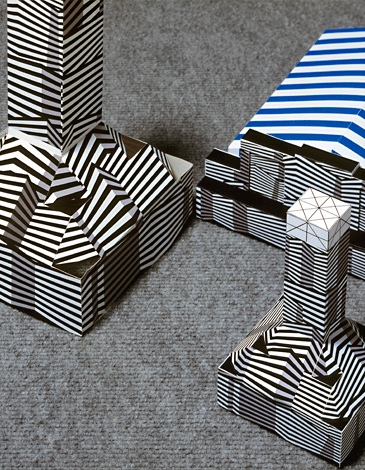 Scale model of the cardboard box that was part of the pop-up publication that we designed for Artimo and the Groninger Museum, on the occasion of a travelling Marc Newson retrospective. More about this publication can be read here. 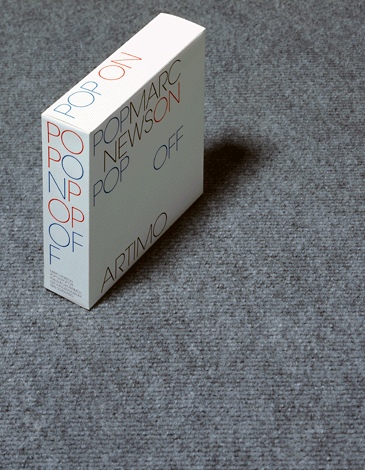 Scale model of the catalog we designed for 'We Are the World', the group exhibition that took place at the Dutch pavilion during the Venice Biennale 2003 (Italy).
In short, the form of the catalog was based on the way double albums (so-called 'gatefold' record sleeves) are constructed, while the inkblots used throughout the catalog were referring to the idea of modern art (Pollock's drip paintings), nationality (the forms of countries) and psychology (Rorschach's test). 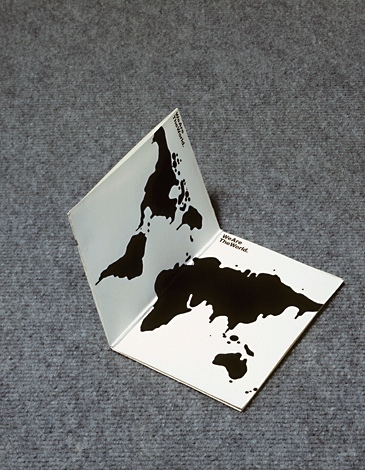 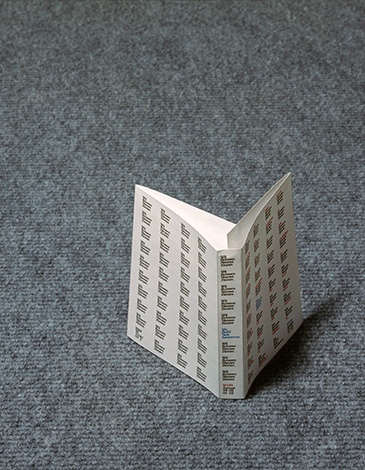 Scale model of a set of three record sleeves that we designed for a group exhibition at Rocket Gallery (Tokyo). Basically, the curator of this exhibition asked the participating artists and designers to create work inspired by existing record covers.
We designed a set of three empty cardboard gatefold record sleeves, referring to the classic record cover of Pink Floyd's 'The Dark Side of the Moon' (designed by Hipgnosis), but also referring to the triangle, circle and square of Bauhaus, the German pre-war modernist school. In a way, it's a double homage (to Hipgnosis and to Bauhaus), synthesizing our two main influences, psychedelic pop-culture and early modernism.
The actual set consists of three 12'' sleeves: the scale models shown below are 7'' in size each. 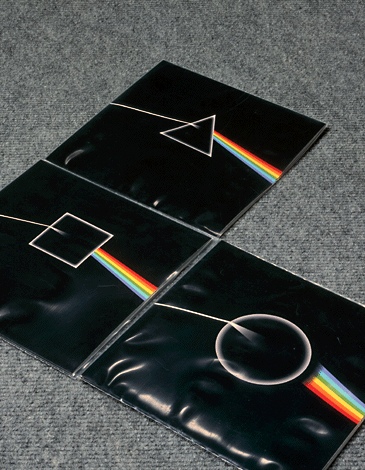 For TPG Post (Dutch Post Group), we designed the December Stamps of 2002, and one of the formats in which these stamps would appear was as a roll. These rolls are usually packaged in boxes, so for the presentation we packaged a roll of our stamps in the small box shown here. We knew that this box would be only for the presentation; the actual boxes are never designed by the designers of the stamps, but designed according to the corporate identity of the TPG. In other words, the box shown below was never put in production, but the stamps were. 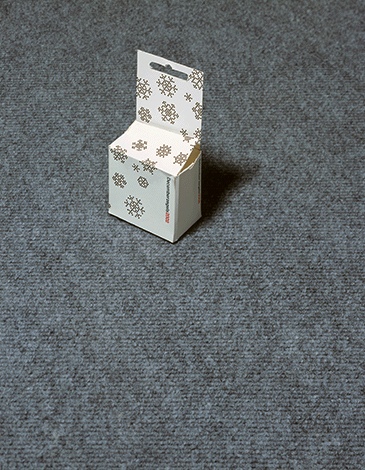 Models for 20/20 Vision, a group exhibition that took place at Stedelijk Museum CS (SMCS) in 2005. Basically two cardboard stand-ups, representing two walls filled with the document holders that we used (as sign system) throughout the whole museum. The actual installation is described in detail here. 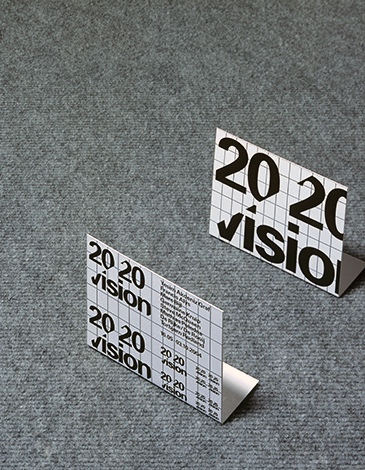 Small-scale sketches for a series of publications we designed between 2003 and 2005 for photographer Johannes Schwartz. See also High Light and High Nature. 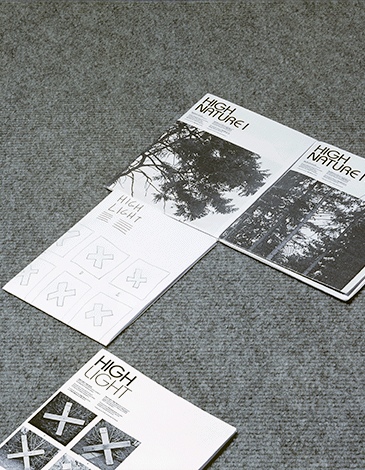 Small pieces of paper we used to demonstrate, to ourselves, how the sign system of the Stedelijk Museum CS should function. The SMCS signage was basically a system of around 2000 plastic document holders, filled with A4-size sheets of paper; the snippets of paper shown below represent these A4 sheets. See also SMCS signsystem. 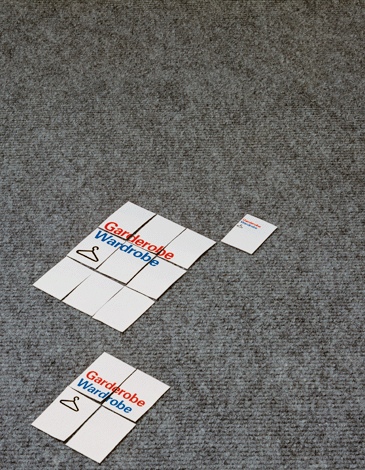 On the occasion of AEX (Amsterdam Expose), a group exhibition that took place in 2000 at the Stedelijk Museum, two limited edition objects ('multiples'), designed by fashion designers Viktor & Rolf and jewelry designer Katja Prins, were produced for the museum shop. We were asked to design the packaging for these two objects. Our idea was to come up with a packaging that also could be used as a carrier, so we decided to use a white standard linen bag (a so-called 'tote-bag'). The objects would then be sewn into these bags, in such a way that the difference between these two objects (in size and volume) would be displayed as clear as possible. (The last moment, biographies of the designers had to be included in the packaging, so we decided to just screenprint these biographies on the bags).
Shown below is a selection of small-scale self-made hand-sewn models of these bags. 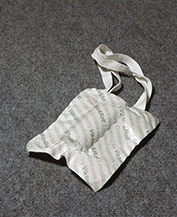 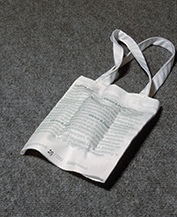 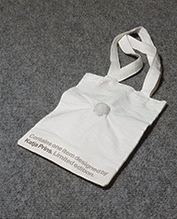 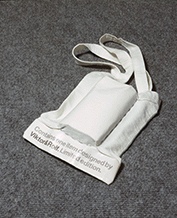