Pop On Pop Off is basically a cardboard box that was published on the occasion of a Marc Newson exhibition at the Groninger Museum, containing the following items: a pop-up book, a t-shirt, two buttons (badges), and a so-called 'blotter art' sheet (a perforated sheet of undipped LSD stamps). 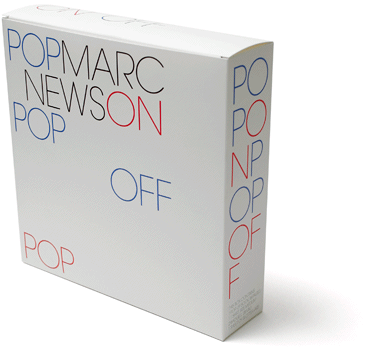 It was Dutch publisher Artimo who approached us to design the Marc Newson pop-up book. Since we had no experience with pop-ups, it was quite a challenge to figure out how to fold, cut and glue the paper. We actually did all the paper engineering ourselves (with some help from the printer).

We have to admit, we tried to downplay the idea of a pop-up book a bit, by keeping the book floppy and unvarnished, and by keeping the pop-ups themselves quite simple and anti-climactic. To understate the pop-up part even further, we called the project 'Pop On Pop Off', as if we were saying, anything but 'Pop Up'. 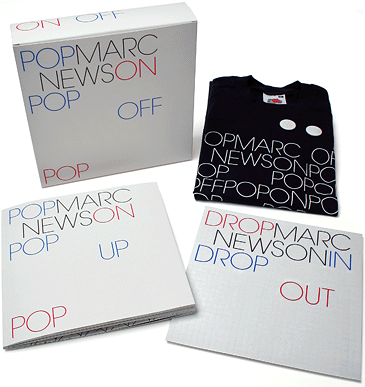 We decided to enclose some pop-cultural artefacts in the box (t-shirt, buttons, blotter sheet), to play with the double meaning of the word 'pop'.
The blotter sheet was something we actually wanted to work with for quite a long time. A blotter sheet is a perforated sheet of stamps that has to be 'dipped' in LSD. The stamps can then be placed on the tongue. We're not really acidheads ourselves (not at all, actually), but we were aware of this subculture of people collecting, selling and buying 'undipped' sheets, on sites like E-Bay. (We revisited this theme four years later, for a contribution we designed for The Session).
We enclosed the blotter sheet in the box to place Newson's work in a slightly psychedelic context; we thought it would be an interesting twist. In a way, the blotter sheet, and the title of the box (Pop On Pop Off), both refer to Timothy Leary's slogan 'Turn On, Tune In, Drop Out'.

Marc Newson often cites sixties/seventies science-fiction movies ('2001 A Space Odyssey', 'Dr. No', 'Solaris') as his main influences. So we decided to design the spreads of the book as if they were prog-rock gatefold sleeves. (To us, that was a logical conclusion: sci-fi plus psychedelica plus pop culture plus paper engineering equals prog-rock album covers. With Marc Newson's designs floating around like space ships):

While we were working on this project, we were also heavily occupied with the design of the graphic identity of Stedelijk Museum CS (SMCS). The workload being too much, we have to admit that the design of Pop On Pop Off wasn't a textbook example of a smooth and spotless process. When we see the book, we even feel slightly embarassed. But it was an interesting experience nonetheless.