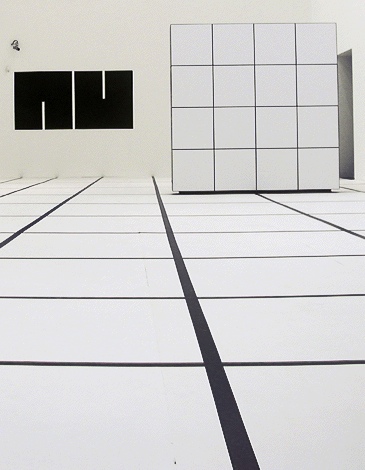 Between 15 September and 12 October 2003, an exhibition on ninety-years old Dutch furniture company Pastoe was held at the Centraal Museum (Utrecht), curated by Guus Beumer and Gert Staal. For this retropsective, various artists and designers (among others: Goodwill, Alexander van Slobbe and Johannes Schwartz) were asked to revisit/reinterpret the very idea of modernism by means of installations.

For this exhibition, we were initially asked to create an installation (see Pastoe / Installation), and later we were also asked to design the sign system for the whole exhibition. We tried to approach these two components (installation and signage) as entirely separate projects.
Shown here a picture of the sign system while it was being built: 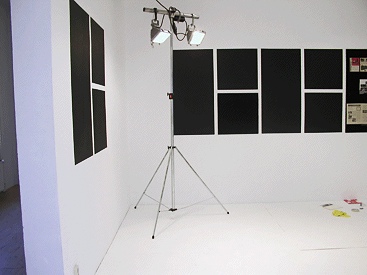 The signage that we designed was actually a system of blackboards and bulletin boards, a system that we formally based on the classic Pastoe logo:

Actually, for this sign system, we were visually quite inspired by Godard's 'La Chinoise' (1967), an aesthetically stunning movie featuring a heavy dose of blackboard maoism. 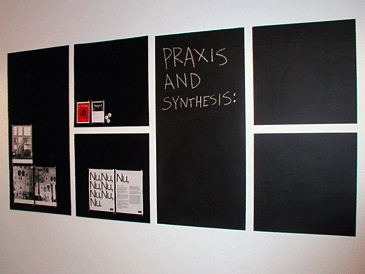 For the entrance, we designed a simple white banner. We repeated the word 'Nu' ('Now') a couple of times, to give it a staccato-like rhythm. In a way, it's a slogan referring to the idea of history being a repetition of 'Nows': 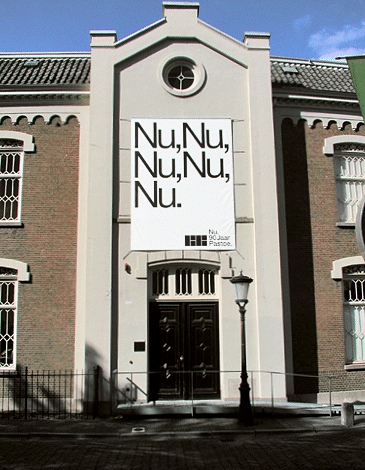 We were also asked to come up with a feature for the central room of the exhibition, a large hall featuring Pastoe's showpiece, the 'Vision' cabinet. For this room, we designed a grid that was based on the system of dimensions and proportions as used by Pastoe. This grid was then taped on the floor of the room. We liked the idea of taking an internal system, and turning it into an environment. The visitor becomes really part of the system, like a ghost in the machine.

In the background, you can see how we modified a few of the blackboards in such a way that together they form the letters 'NU': 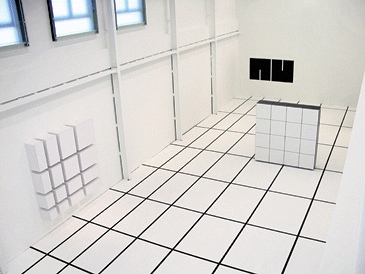 The same room, seen from the other side: 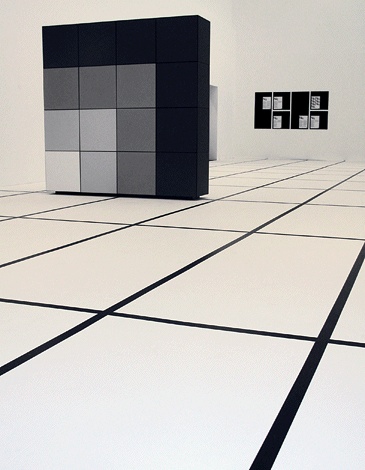