Between 1995 and 1999, we designed various posters and flyers for Paradiso, Amsterdam’s premier rock venue. Paradiso plays an important role in the recent history of Amsterdam, and in Dutch counter- and rock-culture in general, so it is a real honour to have been involved with this place. It also has a rich history of graphic design (Martin Kaye’s amazing concert posters, to name one example), so we’re proud to stand in that tradition.

We designed hundreds of flyers for Paradiso, but surprisingly only a handful of posters. There were specific reasons for this; we’ll get to that later. First we like to show a small selection of four posters we designed for a Paradiso club night called Paradisco: 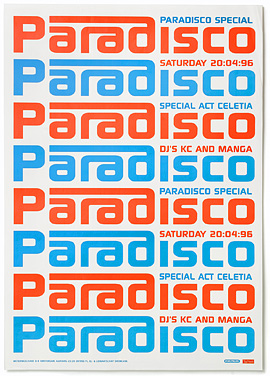 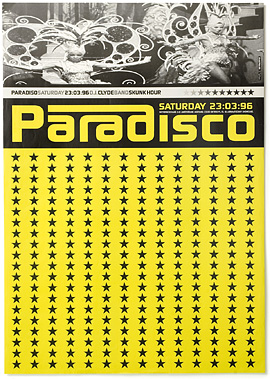 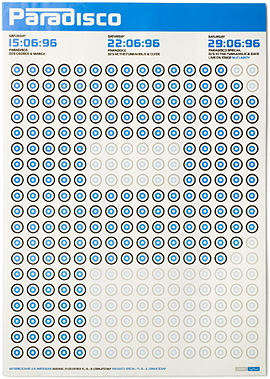 The first three posters (size A2) were designed in 1996. Around that time, we were experimenting a lot with patterns. We noticed that the previous posters we made for Paradisco were hung in the street in a specific way: as blocks, or as rows. Whole walls were sometimes filled with the same poster, repeated in a grid. So we figured that by turning the poster into a pattern, this effect would be emphasized. The posters would bind together, like one field. That's why these posters are filled with patterns.

The fourth poster (size A2 as well) was a poster we made in 1997, for ‘Paradisco Special’, a special edition of Paradiso, in this case a club night featuring a performance by dance group Blok & Steel. It might be not clearly visible in this size, but the boxes on this poster are in fact numbered: the boxes on the white background are numbered 1, 2, 3, while the boxes on the brown background are numbered 4, 5, 6. For us, these numbered boxes had a lot to do with choreography, and with those numbered diagrams that show you how to dance. (Of course, the moment these posters were hung in the street, the boxes were immediately filled with graffiti, which was an interesting effect as well).

So why was the amount of posters we designed for Paradiso was so small in comparison with the amount of flyers we designed? Well, the fact is, when we became involved with Paradiso, around 1995, the whole attitude of organizers in general seemed quite ‘anti-poster’. For some reason, the general consensus was that flyers were better to reach specific ‘target audiences’. Posters were seen as not focused enough, as reaching a lot of people potentially not interested in the ‘message’. While flyers could be handed out to specific people.
It’s a way of thinking that has always bothered us. We really dislike this whole notion of ‘target audiences’. We absolutely love the idea that posters can reach everybody, including people that are potentially not interested in specific genres of music. We would hate to live in a culture where everything is tailored towards specific tastes. We like the idea of unfocused messages, wasted posters, unexpected information.
But unfortunately, time was against us, and we ended up designing mainly flyers. Now, ten years later, we see that even flyers are considered to be too ‘unfocused’, and that a lot of concerts are announced by e-mail or MySpace, even more specific ways to distribute information. It’s a shame really. Posters are so much better. They really are the glue that binds a city together.