In June 2005, Kai Bernau, a student at the Royal Academy of Fine Arts (KABK) in The Hague, asked us (among some other designers) to participate in Neutral, a graduation project that was both a neutral typeface, and a statement about neutrality. Apart from contributing to an e-mail discussion on the subject of neutrality, he also asked the invited designers to create a poster displaying the Neutral typeface. These posters were shown during Kai's graduating exhibition. More about this project can be seen at Letterlabor.

Thinking about the idea of introducing a new sans serif typeface, we suddenly remembered a quote about Stanley Kubrick, a quote that has been posted on a lot of (typo)graphic forums. It's a quote pulled from an article in The Guardian, describing Kubrick's obsession with the typeface Futura: "It was Stanley's favourite typeface. It's sans serif. He liked Helvetica and Univers too. Clean and elegant".
We used this quote as a starting point for our poster. Since Kubrick was clearly so interested in sans serif type, we figured that the best context to show a new typeface would be a poster for one of Kubrick's movies; the ultimate testing environment for a sans serif. Also, a movie poster is a very recognisable format, so we thought it would fit quite naturally in Kai's series of posters.
While we were thinking about this plan (to design a completely typographic poster, as a sort of hybrid between a film poster and a type specimen), we suddenly had another idea. We realised that the most 'neutral' letter of a sans serif alphabet would be the 'I', as it is just a black vertical bar: it could be either a capital 'i' or an undercast 'L'. In fact, it is the context (the word in which the letter is placed) that decides whether the 'I' is an 'i' or an 'L'. At that point, we made the connection between this neutral 'I', and the black monolith that plays a central role in Kubrick's '2001: A Space Odyssey'. 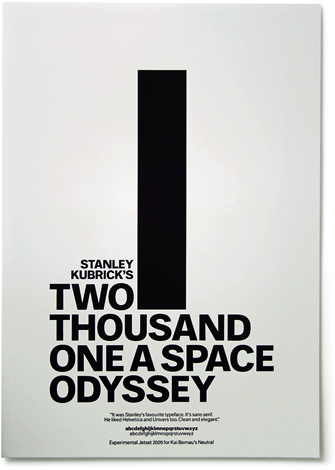 Dr. Heywood R. Floyd:
Any clue as to what it is?

Dr. Bill Michaels:
Not really. It's completely inert. No sound or energy sources have been detected. The surface is made of something incredibly hard and we've been barely able to scratch it.

Floyd:
But you don't have any idea as to what it is?

So that is, in short, the idea behind the poster. The neutral sans serif 'I', shown as black monolith, in the form of a film poster.

next: The Beauty of Speed