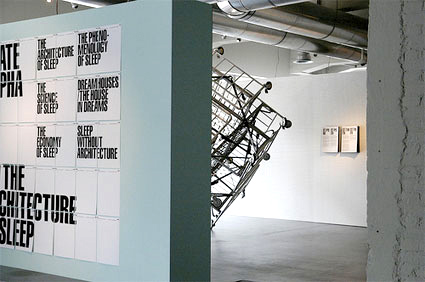 'State Alpha: On the Architecture of Sleep', a group exhibition on the relationship between architecture
and sleep, took place between June 29 and October 5, 2008, at the NAi Maastricht (and to know more about NAiM as an institute, read NAiM / The Edible City 1).
The exhibition was curated by Sabine Dreher and Christian Muhr, of Viennese curatorial team Liquid Frontiers. (In fact, this was the second time we were involved with Liquid Frontiers; the first time was in 2003, for Cellscapes for Cellphones).

As with most other shows taking place at NAiM (see NAiM / The Edible City 2 and NAiM / Changing Ideals), the architecture of the exhibition was created by Herman Verkerk and Paul Kuipers, who work together under the name EventArchitectuur.
In those instances we work together with EventArchitectuur, our main task is usually to find ways to incorporate a typographic layer in their constructions. Herman and Paul always come up with enormous installations functioning as carriers for text; our job is to find a logical, organic way to attach type to these constructions. In the case of The Edible City, we decided to use market stall clams and wheatpaste; in the case of Changing Ideals, we came up with LPC Double clips. With State Alpha, we came up with yet another system.

For State Alpha, EventArchitectuur wanted to create a labyrinth consisting of hardboard walls. The hardboard they were planning to use was in fact perforated. In other words, hardboard with pre-drilled holes; so-called 'pegboard'. Our idea was to attach typography to those boards using these metal hooks that are normally used to attach tools to walls. Metal hooks that fit perfectly in the holes.
We would print out all the texts, captions and titles on A3-sized sheets, and perforate them, so that they could be hung on these metal hooks. An example can be seen here: 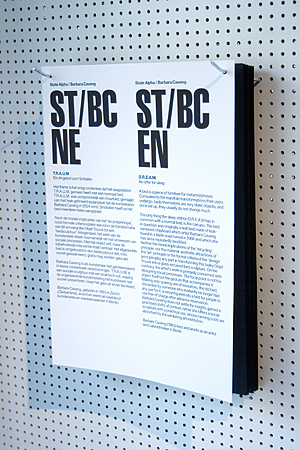 So we incorporated all typography in the show using these metal hooks. We also added, underneath each hanging text sheet, a stack of black paper. By adding this block of black paper, we tried to give the impression of a very deep, dark shadow lurking behind each text sheet, emphasizing the idea of night, of sleep. More pictures of the exhibition can be seen below (photographs by Guus van den Akker, Johannes Schwartz and ourselves): 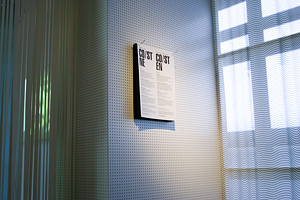 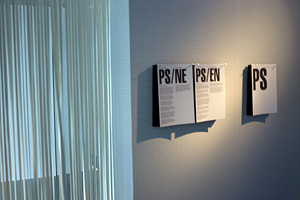 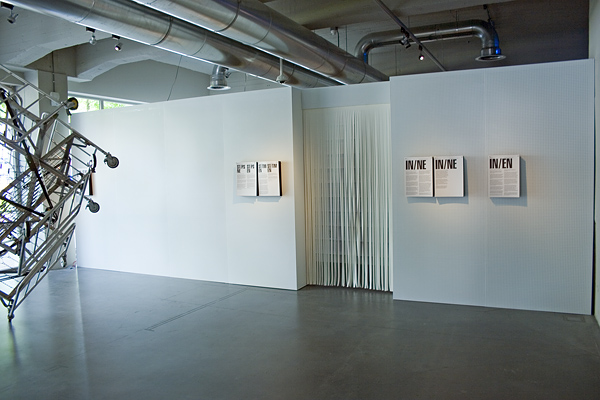 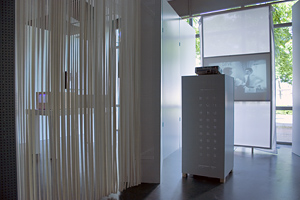 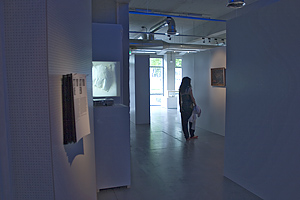 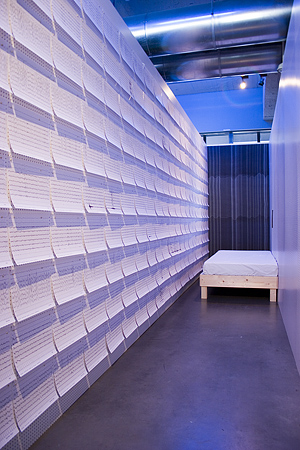 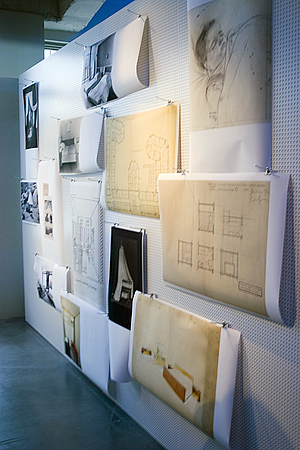 We had to install the title on a wall that didn't had these little holes in it; so on this wall, we couldn't use the metal hooks. That's why we used simple pushpins here: 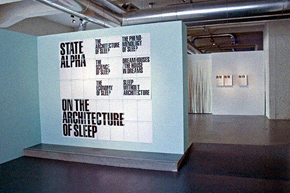 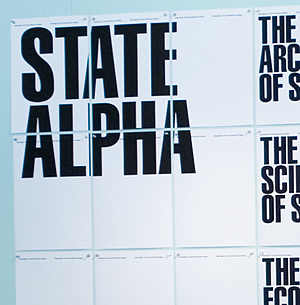 As with the other exhibitions we did for NAiM, we also designed some lettering for the outside of the building. These letters were cut from glow-in-the-dark vinyl. 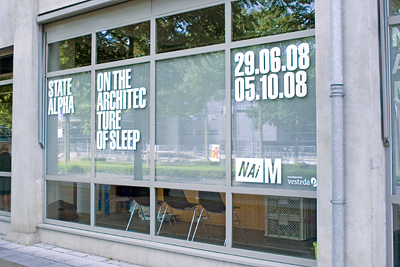 As for the A2 poster: we decided to use a pattern of waves, referring to graphic representations of brain activity during sleep, but also referring to the idea of a closed, wrinkled curtain. In fact, the moment we thought that the curtain reference became to dominant, we added a sort of measuring line underneath, to make the brainwave reference stronger.
On the back of the poster, we printed a field of pale green ink, referring to glow-in-the-dark paint (actual phosphor ink was simply too expensive). The poster (front- and back) can be seen here: 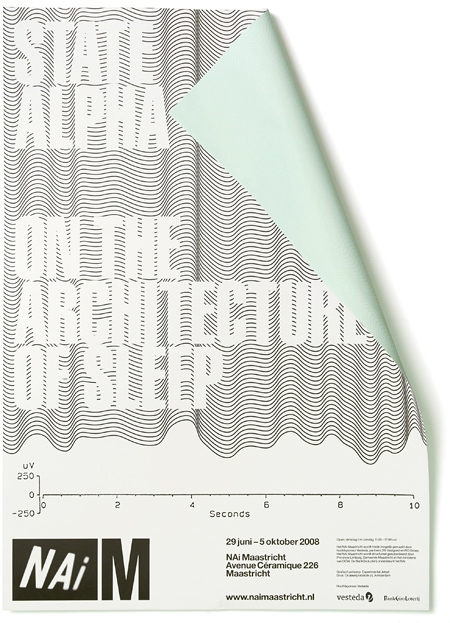 It might seem absurd to print the back of a poster, but we knew it was not. When screenprinting posters, we often use so-called 'blue-back' paper: paper of which the back is blue, to make the paper less transparent. We noticed that, when we hang these blue-back posters on the wall, the blue on the back always has a subtle presence; around the poster, you notice (albeit barely) a blue glow, almost like an aura.
By printing the back of the State Alpha poster with a colour-field, we wanted to replicate this auratic blue-back effect. 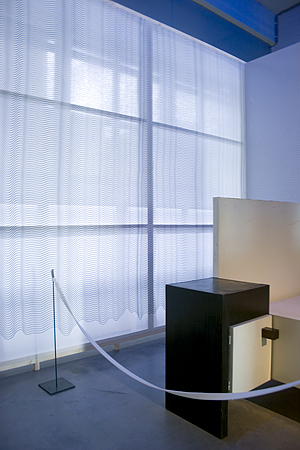 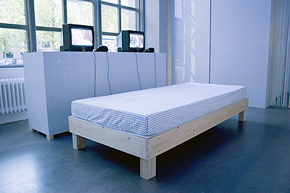 The invitation revolved around the brainwave pattern and the faux glow-in-the-dark ink as well. We kept it quite simple: an A3-sized sheet, printed on both sides, folded to an A5-sized format. Shown below the front- and back of the invitation, in its folded form: 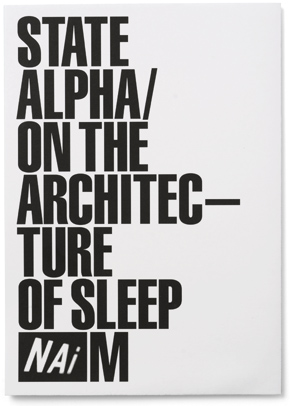 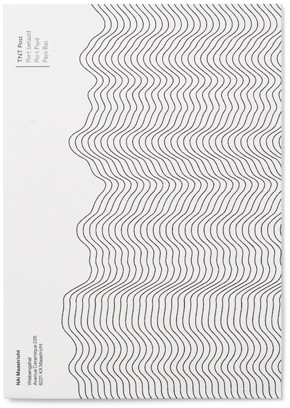 Followed by a photograph of the invitation in its unfolded form, as an A3 sheet (front- and back): 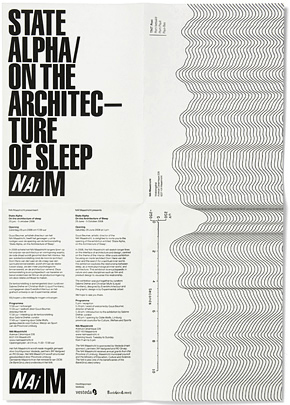 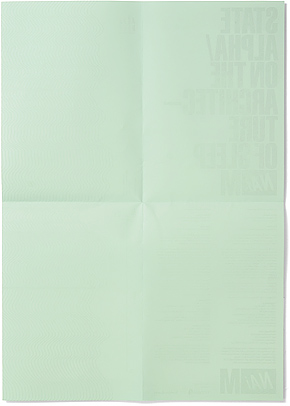 We were also asked to design a simple brochure, to go with the exhibition. We came up with a double-sided A3-sized sheet, which could be folded to an A5-sized booklet in two different ways. Folded in one way, the sheet turned into a booklet containing information about State Alpha; folded in another way, it became a booklet that contained more general information about NAiM. Half of the sheets were folded to a State Alpha brochure, the other half was folded as a general NAiM brochure. Shown below the two different front covers: 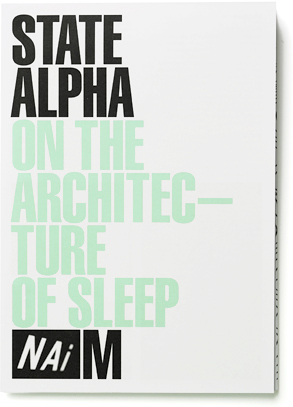 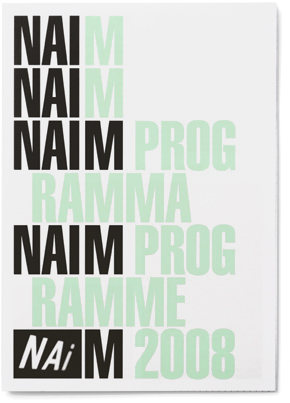 The double-sided A3-sized sheet, front- and back, can be seen here: 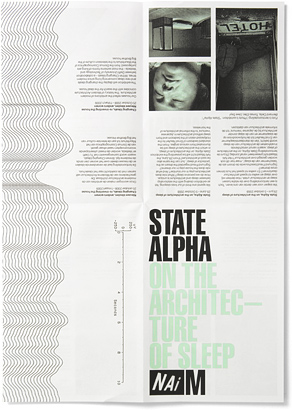 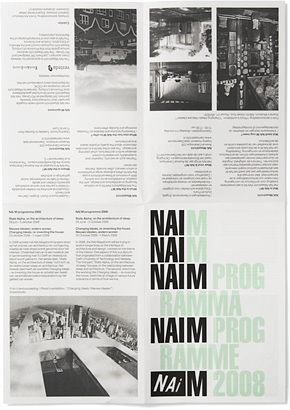 One final note. Obviously, we make sketches at the start of every assignment; in the case of State Alpha, we felt somehow really indecisive, and started out making a huge amount of sketches. These sketches were just for private use, we never actually proposed them to NAiM (we usually propose only one version). Some of these sketches are quite rough, but we thought you might find them interesting to see. Shown below, as flat digital thumbnails, a small selection of early versions of the State Alpha poster:

By the way, State Alpha happens to be the second time were involved in an exhibition revolving around the theme of sleep and dreams; the first time was in 2000, for Elysian Fields, a group exhibition that took place at the Centre Pompidou. Sleepyheads should go there.