During the summer of 2012, the Maastricht-based institute NAiM / Bureau Europa were involved in all kinds of activities taking place in Sphinx Park, a temporary park in the centre of Maastricht. The graphic design of Sphinx Park itself was actually done by Karen Willey, so we had nothing to do with that. But NAiM / Bureau Europa did ask us to design a couple of items to announce their presence in the park, so we ended up doing a simple postcard, and some prints. These items were then distributed/shown in the building of NAiM / Bureau Europa, basically to instruct visitors to get to the park.

First of all, here’s the postcard. It’s a very straight-forward item – basically a bilingual, A5-sized cardboard sheet, printed on both sides, and perforated in such a way that it can be torn apart as two separate A6-sized postcards. Printed in black and green, and featuring a couple of ‘dividing’ slashes, the composition refers to the relationship between city and park (and also the tension between culture and nature, as encapsulated in the notion of ‘the park’): 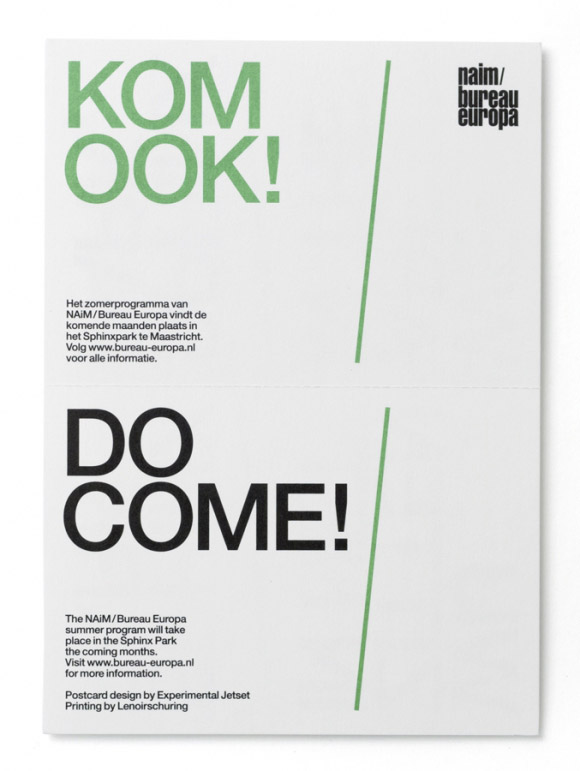 Having said that, within this specific context, digital printing made sense, because only a couple of these posters had to be produced (they were displayed in the windows of the building of NAiM / Bureau Europa, to tell passers-by how to get from the building to the park).

So to make a long story short, here’s the series of prints we eventually designed (A0-sized, digitally printed by Studio QS). First a poster displaying general information about the park, followed by a print giving specific instructions on how to get to the park, and finally a print showing a picture of the Sphinx Park itself (a photo made by Peter Visser). [Update: prints not shown here yet].

Sphinx Park was an initiative of ReCentre, Marres and NAiM / Bureau Europa, and took place from March 2012 to July 2013. For more information, check the website designed by Karen Willey.