Each year, the Stedelijk Musem holds an exhibition revolving around the ‘Gemeentelijke Kunstaankopen’ (Municipal Art Acquisitions); and each year, this exhibition has a different theme (Painting, Photography, Design, etc.). In short, these annual exhibitions are group shows, from which a number of works will then be acquired by the museum. In 1999, the theme of the Gemeentelijke Kunstaankopen was ‘Design and Applied Art’, and the title was ‘AEX (Amsterdam Exposé)’. It would take place between April 10 and May 30, 1999.

Curated by Leontine Coelewij, the exhibition included designers and photographers such as Alexander van Slobbe, Viktor & Rolf, Anuschka Blommers & Niels Schumm, and many others. The catalogue was designed by Vanessa van Dam, and the exhibition design was done by EventArchitecture. The show also included a ‘voting machine’ by Marjolijn Ruyg. And we were invited to contribute a piece as well.

Reflecting on the sort of installation we wanted to create, we thought it would be interesting to emphasize the role of graphic design within a museum. So our initial ideas and sketches revolved around the concept of creating a set of alternative nameplates (wall labels, or title boards), offering fictional titles for already existing artworks. Our idea was create, all throughout the museum, a sort of parallel path or tour – by hanging, underneath each artwork, an unofficial nameplate (next to the official nameplates). We thought this would be an interesting intervention within the material context of the museum, adding a new, unexpected narrative to it. However, at the last moment, it turned out we weren’t allowed to execute such a plan – we simply had to work within the space that was given to us. So the real challenge was to simulate our original idea (a series of alternative nameplates, offering an unofficial narrative), while staying within the room/hall that was allocated to us. 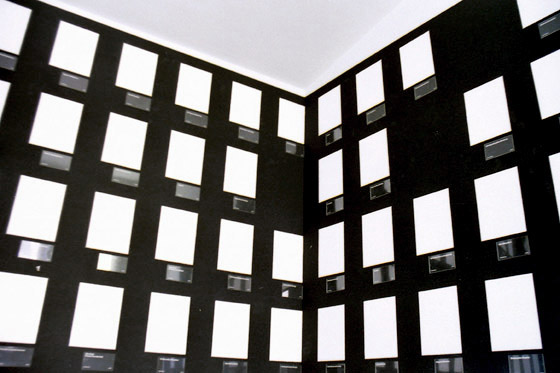 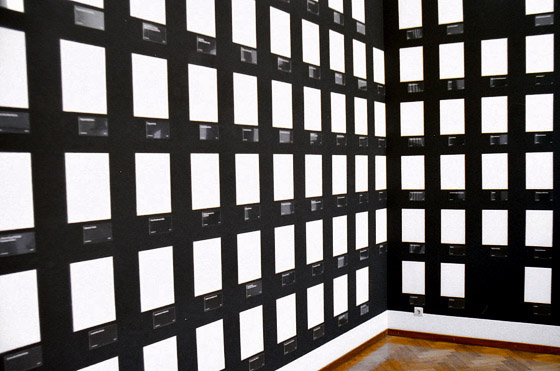 We ended up creating a huge mural, consisting of a large black field covering three adjoining walls. Within this enormous black field, smaller (A4-sized) fields were ‘reversed-out’. Underneath these empty rectangles, we mounted plastic, transparent A6-sized nameplates, carrying a different fictional title each.
We painted the black field ourselves, leaving the A4-sized rectangles empty – in other words, it was the black that was painted, not the white. Our idea was that, by showing empty fragments of the museum wall, we would literally display nothing – which would then automatically emphasize the nameplates underneath these empty spots. 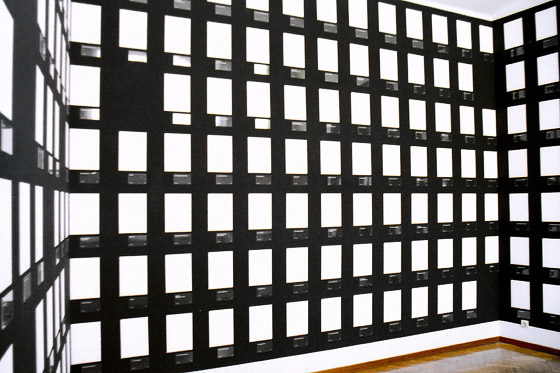 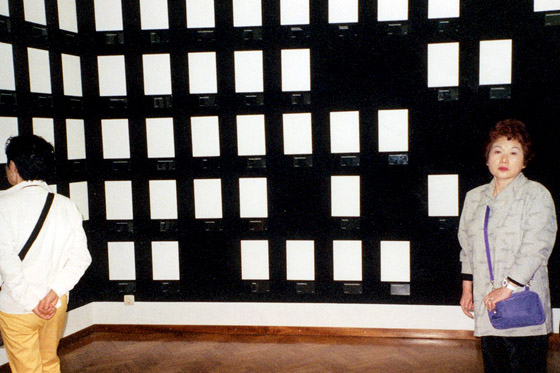 We hoped the white A4-sized fields would also offer, to the visitors, a sort of empty ‘projection screens’, for the viewer to fill in him/herself. We figured that the tension, between the empty spaces and the fictional titles, would create interesting new narratives, taking place in the minds of the viewers (rather than on the walls).

In retrospect, the mural already pointed to some of our later work, in which we explored so-called ‘A’-formats (DIN476, the system of paper-sizes also known ISO 216), for example the Kelly1:1 installation we realized for Casco in 2002, and the sign system we created for SMCS in 2004. 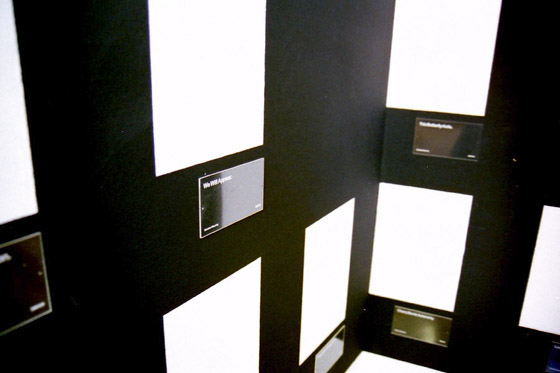 The weak point of the installation might have been the actual titles. Because the idea of the mural came to us quite late in the process, and the nameplates had to be printed well in advance (and we really needed hundreds of them), we had to come up with hundreds of fictional titles in just a couple of hours. The effect was almost that of ‘automatic writing’ (or what the Surrealist called ‘Automatism’): writing down words, names and titles in an almost subconscious way. This eventually resulted in a large collection of strange phrases, bizarre combinations of words, existing and non-existing song titles, imaginary titles for speculative books, etc. etc. In addition, we also kept a dozen (or so) nameplates ‘Untitled’. 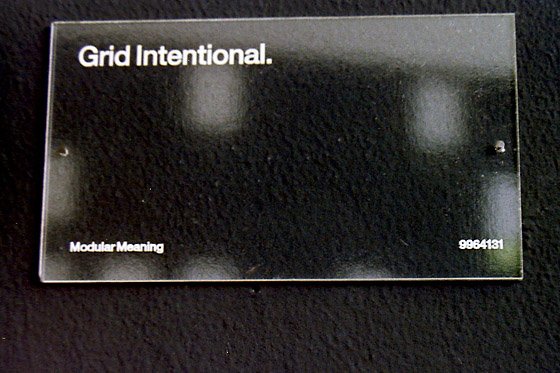 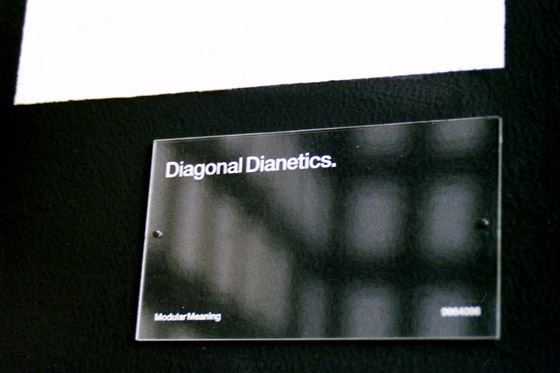 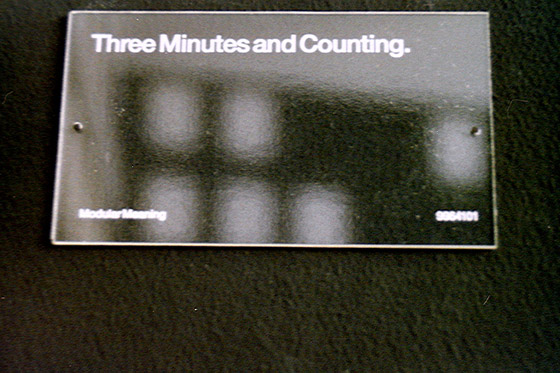 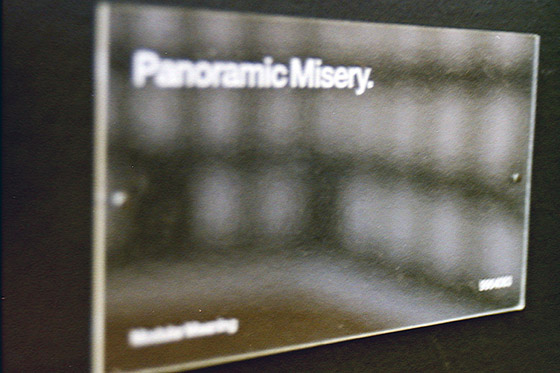 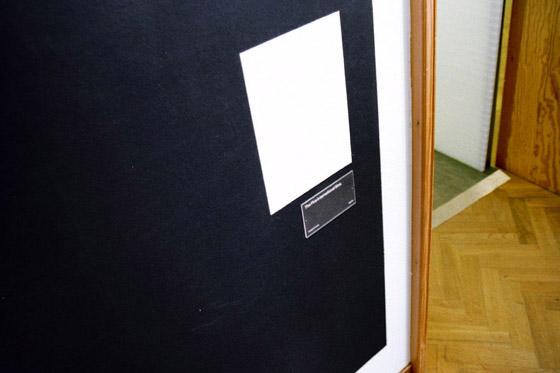 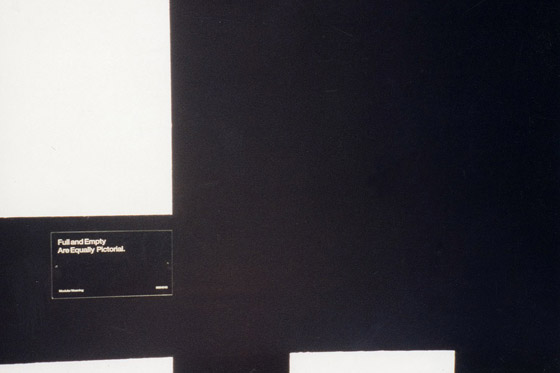 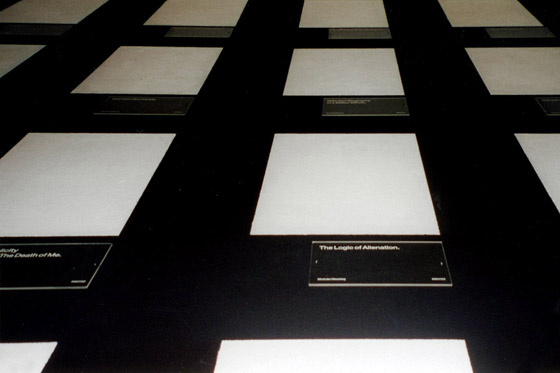 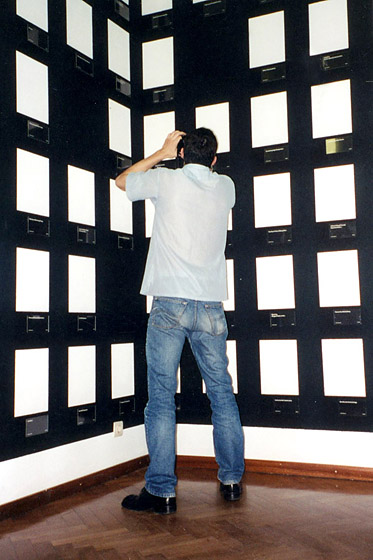 As for the title of the installation (‘Modular Meaning’) – it came to us in quite a subconscious way as well, while writing all the other titles. There was certainly an element of alliteration at play, something we’ve been always attracted to.

We also designed, as part of the installation, an invitation – a piece of cardboard, measuring a (slightly panoramic) 24 x 11 centimeters (offset-printed by Drukkerij Rob Stolk), featuring an early sketch of the installation. Shown here the front and back of this invitation: 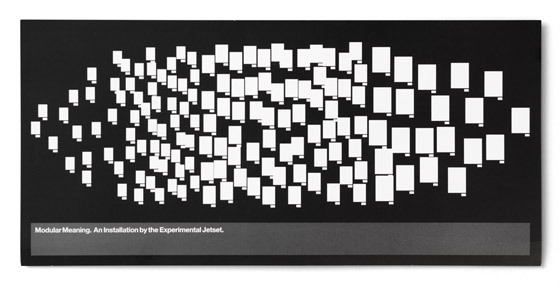 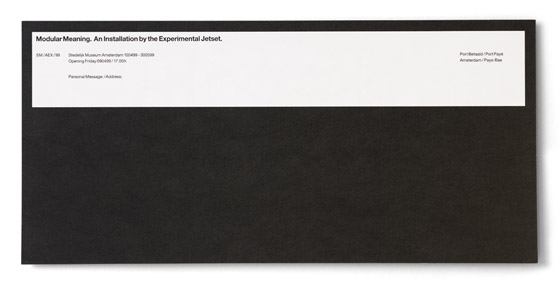 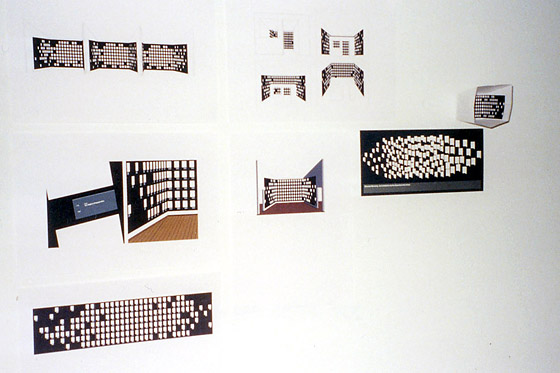 Right after the exhibition, our work was indeed acquired by the Stedelijk Museum – which in this case, actually didn’t meant that they acquired the actual mural. Instead of acquiring actual works, the idea of the Stedelijk Museum was that they would commission a selection of designers to create specific objects, to be sold in the museum shop. In short, they asked Katja Prins and Viktor & Rolf to produce ‘multiples’ for the store, while we were invited to come up with a conceptual way of packaging for these multiples – this project is described in another chapter (see Viktor & Rolf & Katja).

Some of the above ‘installation views’ were photographed by Devon Ress; others were shot by ourselves. The plastic, transparent, A6-sized nameplates were printed by Haneck, Amsterdam. We would like to thank Leontine Coelewij for inviting us to participate in the exhibition. And we’d like to thank our friends Devon Ress and Femke Dekker for helping us to actually paint the mural.