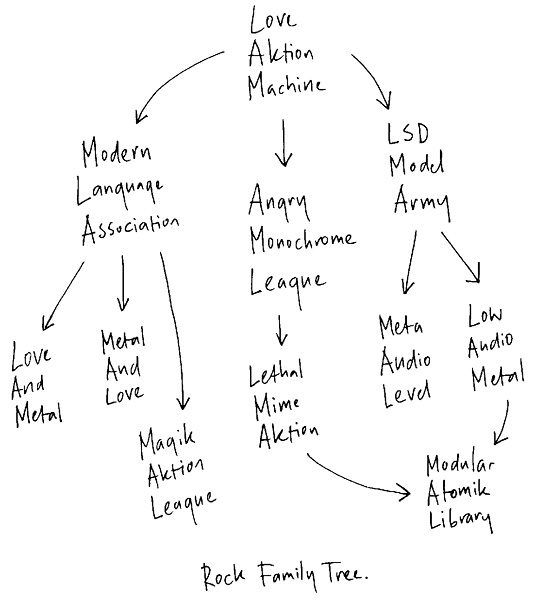 Somewhere around November 2005, we were asked by De Veemvloer, an Amsterdam exhibition space, to participate in 'Music for the Artists', a group exhibition exploring the relationship between art and rock music.
Coincidentally, around the same time, three of our friends started a rock band, and asked us if we wanted to design a band logo. Even more interestingly, they asked if we wanted to think of a band name. For 'Music for the Artists', we decided to create an installation based on this search for a band name.

The band consisted of Lars Eijssen (performance artist), Anuschka Blommers (photographer) and Mark Bain (sound artist). Trying to search for a name for this band, we created a modular system of three-word band names starting with the first letters of the names of the band members (Lars, Anuschka and Mark) in various combinations (LAM, LMA, AML, ALM, MLA, MAL).
The idea of using, as a starting point for a possible band name, the first letters of the band members' names was clearly inspired by ABBA (consisting of Anni-Frid, Benny, Björn and Agnetha). The idea of taking all the different combinations (LAM, LMA, AML, ALM, MLA, MAL) and turn them into band names had more to do with American hardcore punk band MDC, who changed the meaning of their acronym (MDC) with every record: Millions of Death Cops, Millions of Death Christians, Multi-Death Corporations, Missile-Destroyed Civilization, etc. In a way, the idea behind the system we used can be described as ABBA meets MDC.

To make a long story short, we took all possible combinations (LAM, LMA, AML, ALM, MLA, MAL) and turned them into a whole database of possible band names (Love Aktion Machine, Lethal Mime Aktion, Angry Monochrome League, etc.). We then transformed a selection of these band names into an actual installation. We first established a set of necessary objects for a rock band (backdrop, record sleeves, tour posters, band shirt) and then scattered the various band names across these objects.
(To underline the idea, we also added, onto these objects, the autographs of the band members. Although, to make matters more complicated, the autographs that we used were actually created by ourselves, suggesting the handwriting of the real band members).

The installation consisted first of all of a so-called 'backdrop' (a banner showing a band logo, in front of which bands usually perform): 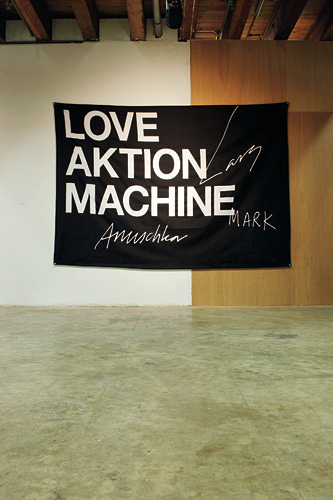 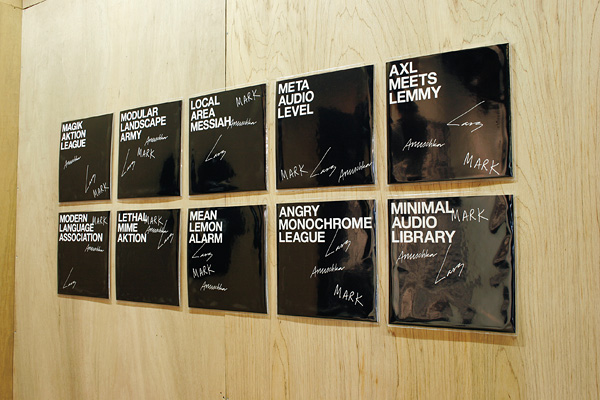 Added to that, a set of four fictional A1-sized tour posters: 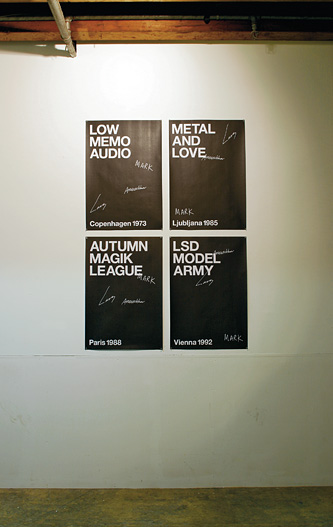 Included in the installation was also a band shirt. (A limited print run of these shirts were sold during the exhibition). 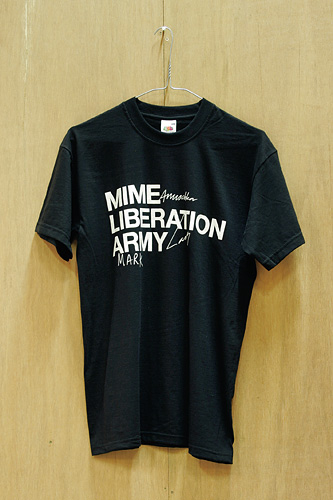 An overview of the installation as a whole can be seen here: 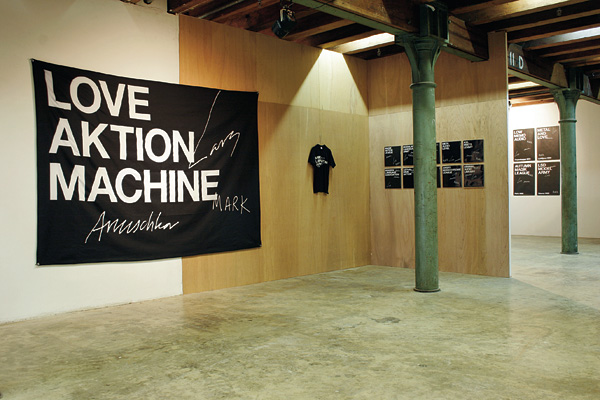 During the opening of the exhibition, Lars, Anuschka and Mark performed for the first time as a band, in front of the backdrop. Shown below are photographs of this performance. On the left you can see Lars, on the right Mark. Anuschka is singing through the telephone (see picture), as she was in London at the time of the performance. The song they performed was a long, slow-motion hybrid of Roky Erickson's 'You Don't Love Me Yet' and Bauhaus' 'Bela Lugosi's Dead'. 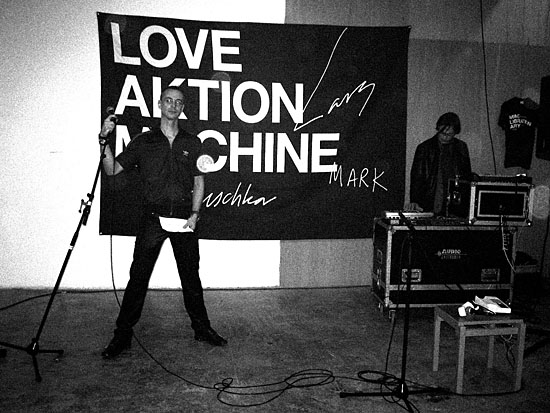 next: The Free Library 2