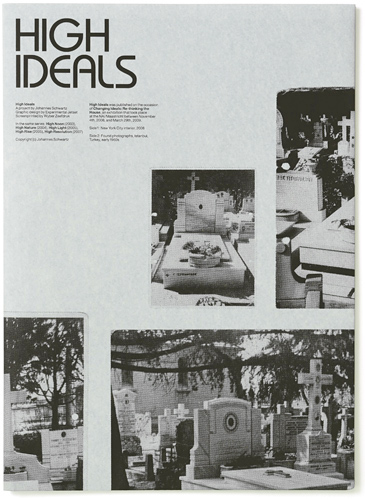 High Ideals was the latest installment in a series of publications that we created together with photographer Johannes Schwartz, starting in 2003 with the publication of High Noon. The idea behind the series is pretty basic: every time Johannes participates in an exhibition, he publishes another issue, and asks us to design it. These issues never contain material featured in the exhibition itself; the idea is always that these issues show other material, work related to the exhibition in a more indirect way. In other words, the publication serves as an extra wall, added to the exhibition.
Since 2003, the following issues have been published: High Noon (2003), High Nature (2004), High Light (2005), High Rise (2005) and High Resolution (2007).

The story behind High Ideals is as follows. In 2008, Johannes was part of an exhibition that took place at the NAi Maastricht (see NAiM Changing Ideals). The theme of this exhibition, curated by Dirk van den Heuvel, was the tension between living and architecture: the way in which architecture shapes our manner of living, and the way in which living shapes architecture. In other words, the dialectics between shaping and being shaped.
For this exhibition, Johannes made a large series of photographs, showing a selection of architectural case studies. These photographs were displayed in the exhibition. At the same time, Johannes decided to also show some other photographs, photos that he thought were related to the exhibition, but wouldn't directly fit on the wall. That's why he asked us to turn these photos in a small publication, to be distributed for free during the exhibition.

Johannes came to us with two different starting points. On the one hand, he wanted to present a photograph he made in a New York City interior, a photo showing an expensive B&O CD-player containing cheap 'home-taped' CD-roms.
On the other hand, he wanted to show a series of photographs he bought at a Turkish market: a photo archive from the early 60s, containing pictures of grave stones. (These photos were clearly made by the stonecutter responsible for the stones: on the back of the photos, little stickers and handwritten notes suggested the stones were all made by the same person, Yorgi Yeromnimon, 'teknik mermer isleri' in Istanbul).
In Johannes' view, these two different photographic concepts (the B&O player filled with cheap CDs, and the found Turkish photo archive) represented the "paradox of modern architecture"; that is how he literally explained it to us.

To make a long story short, we turned the publication into a screenprinted poster measuring 660 x 960 mm. On one side, we placed the New York City photograph, in full colour. On the other side, we printed a part of the Istanbul photo archive, in black and white. Shown below the poster (front- and back) in its unfolded form: 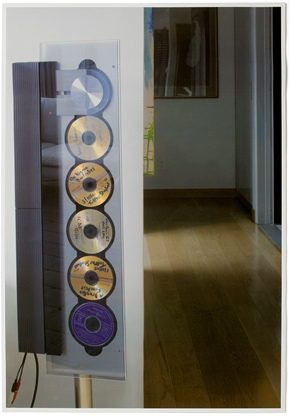 Part of the fun when designing these publications is to come up with new ways of folding. The whole High series always has the same dimensions, 330 x 240 mm, but every issue is folded in a different way: for example, High Noon was a simple booklet, High Rise a long paper strip, and High Resolution an unfolded booklet. And High Ideals is a double-sided poster.

We screenprinted the poster on so-called 'blue-back' paper, paper of which the back is coloured blue (originally to make it more opaque). That is why the Turkish photo archive has a blue background. Blue-back paper is often used for screenprinting, that's why we used it for this project: to emphasize the fact this publication was in fact screenprinted. Moreover, the paper gave the poster a clear front- and back, which fitted really well within the concept.