In 2007, the documentary Helvetica was released, and director Gary Hustwit was touring around the world, taking the movie to all kinds of film festivals and design conferences. On June 22, 2007, the movie had its Dutch premiere at cinema Kriterion, Amsterdam. Because we were kind of involved in the documentary (we designed two posters for it, see Helvetica / Hustwit), we were asked to design the invitation for this premiere.

Shown below the invitation we designed (front and back). Basically an A5-sized card, bearing the words "It was fifty years ago today", referring to the 50th birthday of the typeface Helvetica: 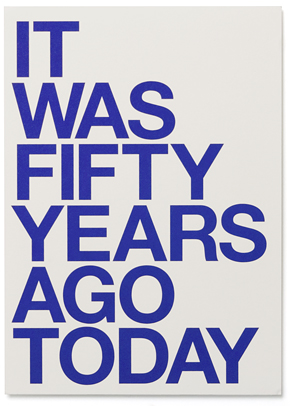 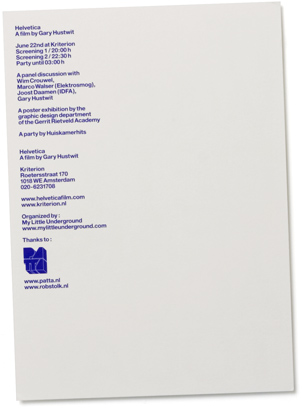 The slogan obviously refers to the Beatles' line "It was twenty years ago today", from 'Sgt. Pepper'. This is actually the second time we referred to the Beatles in the context of Helvetica. In 2002, we were asked for a quote to be used in the book 'Helvetica: Homage to a typeface' (Lars Müller, 2002). We quickly came up with "The Beatles are the Helvetica of pop, just as Helvetica is the Beatles of typefaces", mainly because we knew that our 'John & Paul & Ringo & George' shirt, designed in 2001, would also make an appearance in the book. So we thought this whole "Beatles = Helvetica of Pop" quote would be a nice caption to go with the shirt. But even though we fabricated that quote for that specific context, we do think that there is some truth in it: both the Beatles and Helvetica have, each in their own field, a certain iconic, archetypical quality. They became standards. The "It was fifty years ago today" slogan is referring to that same connection, that same imaginary link between Helvetica and the Beatles.

We also adapted the slogan as a badge, a badge that was handed out during the premiere (badge not shown here). There were also plans to turn the slogan in a shirt, to be sold during the premiere, but it was all very last-moment, and we were quite busy that week, so the shirt was never realized.

Apart from the design of the invitation, and the badge, we weren't involved in the organisation of the event. The premiere was in fact organized by Femke Dekker (of My Little Underground), who also moderated the panel discussion that took place before the movie, and was one of the DJs during the party afterwards.
We were, however, asked to put together a tiny student exhibition at Kriterion, during the event. Being teachers at the Gerrit Rietveld Academy, we turned it into a small last-moment school assignment. We asked our students to design typographic posters of their favorite movies. The lettering on the window was also done by students. Some installation views (details) of this mini-exhibition: 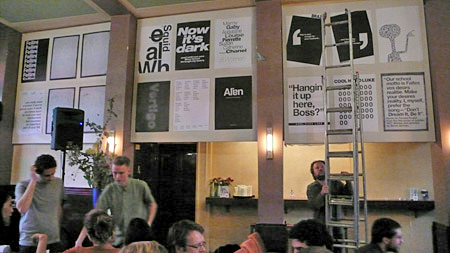 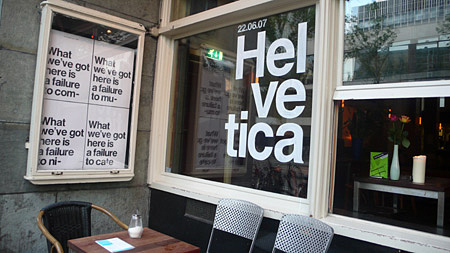 As we wrote, there was also a panel discussion. We were also invited to take part in this, but we politely declined; we really dislike debates and panel discussions. We just haven't got the polemic gene. The persons that were participating in the debate were Gary Hustwit, Wim Crouwel, Marco Walser (from Electrosmog) and Joost Daamen (from IDFA, the International Documentary Festival Amsterdam). The discussion was moderated by Femke Dekker (My Little Underground) and Rufus Ketting (formerly De Humobisten, now Homey Universalis). Below a photo of the panel: 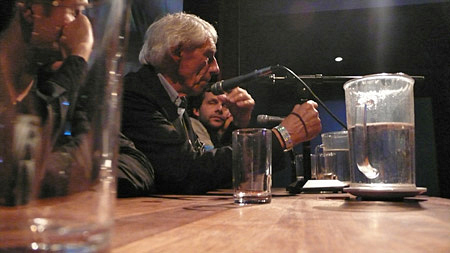 Kriterion, the place where this whole event took place, is actually a really interesting cinema: a student-operated arthouse, with roots in the resistance of the second World War. When in Amsterdam, do visit it.