In the summer of 2007, we were approached by Chris Allen, who was organizing a poster show as a fundraiser for the Roy Castle Lung Cancer Foundation; the name of this exhibition was 'Print Run for Charity no. 1046584'.
A group of twenty designers and artists were asked to design posters revolving around the theme of health. Participants included Anthony Burrill, A Practice for Everyday Life (APFEL), Bibliotheque, Spin, Build, James Goggin (Practise), etc. These posters were screenprinted in an edition of ten prints each, and sold during an exhibition that took place at the Kemistry Gallery (London) between 15 and 25 September, 2007. After the exhibition, the posters were sold at online poster store Blanka (prints are actually still available there). Shown below the poster we came up with (size A1, 840 x 594 mm). 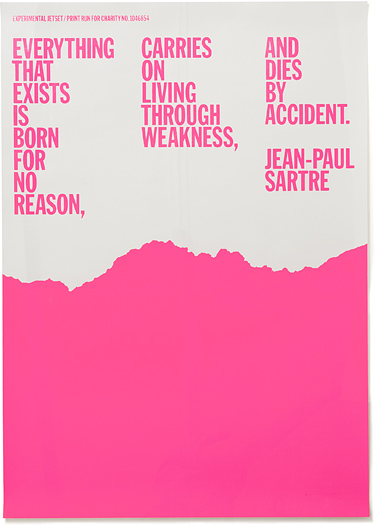 Thinking about health, the theme of the project, we were automatically drawn to this quote by Sartre: "Everything that exists is born for no reason, carries on living through weakness, and dies by accident".
It's a sentence that perfectly encapsulates many of the issues at stake: life, death, health, disease. As atheists, we cannot help but see the cruel meaninglessness of it all; a meaninglessness that can be both liberating and depressing. There's an ambiguity in the idea of a life without meaning; an ambiguity that we tried to incorporate in our poster in the form of a pink, day-glo darkness, lurking behind the surface. In short, we used the suggestion of a torn page to show the abyss that exists under the paper. After all, between us and the abyss, there is only the printed page.

Shown below some images from the exhibition that took place at Kemistry in September 2007 (photographs via the Kemistry website): 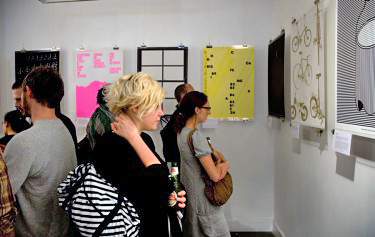 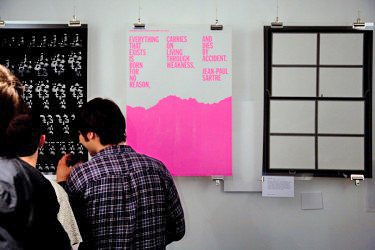 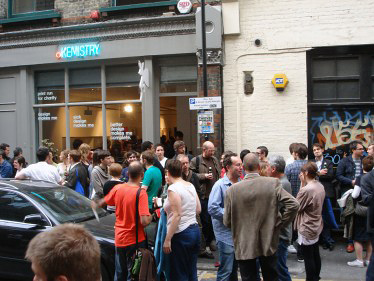 Edit: In June, 2011, the poster was also displayed as part as 'Mixed Messages', a group exhibition that took place at La MaMa (NYC), curated by John Chaich for Visual Aids.