De Vrouw van Vroeger (originally 'Die Frau von Früher', in English 'The Woman Before') was a piece played by De Theatercompagnie between April 18 and April 29, 2006, at Het Compagnietheater in Amsterdam. A couple of months later it toured through the rest of the Netherlands, and a year later it was reprised in Amsterdam.

As with the previous posters we designed for De Theatercompagnie (see for example DTC / Gilgamesj and DTC / Driekoningenavond), the whole concept behind the printed matter revolved around the idea of taking two quotes from the play, and dividing these quotes over two posters; two posters reacting to each other, almost like two actors engaged in a dialogue.
Basically, De Vrouw van Vroeger revolves around the theme of 'hell has no fury like a woman scorned'. Added to that, in the play, one of the characters sings a few lines from a song by the Beatles: "You know I love you still / love you with all my heart" ('I Will', White Album, 1968). Obviously, we could not resist using these lyrics for our posters.
We first designed a set of two posters, A0 and A2. This set is not photographed yet. Instead, we photographed a set that we designed somewhat later, when the play started touring; this set (of two A2-posters) is practically identical to the first set. 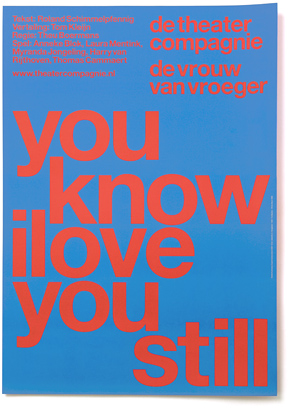 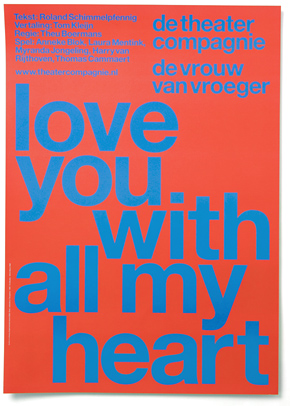 We chose the colours red and blue for a couple of reasons. Because of the prominence of the word 'Love', and the link with 60s pop culture (through the Beatles lyrics) we though it was a good idea to refer to the aesthetic language of artists such as Robert Indiana, and to the idiom of Op-Art, Pop-Art and psychedelic posters. The combination of red and blue creates quite a vibrant, optical effect. In fact, the optical effect is almost disturbing, as the flickering colours really hurt the eyes (especially when looking at the actual printed posters). Which is another reason why we liked the combination of blue and red so much: for us, the disturbing, flickering effect functions as a metaphor for a love gone mental: something that's vibrant at first, but getting increasingly disturbing afterwards.

Shown below a photograph of the A0-sized poster hanging in the street of Amsterdam. 'In situ', so to speak: 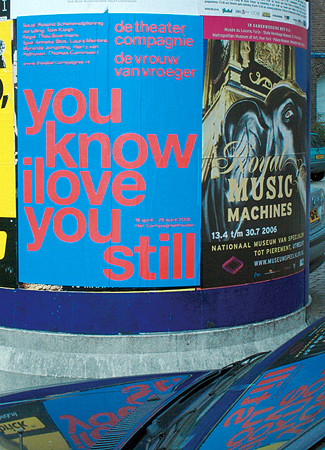 Because of budgetary reason, there was no brochure printed for this play. We were asked to design a hand-out/mail-out flyer instead. We chose to put the two quotes on an A5-sized card, perforated in the middle to form two A6-sized cards. Shown below the front and back of this card. 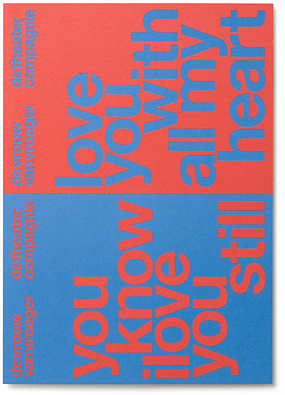 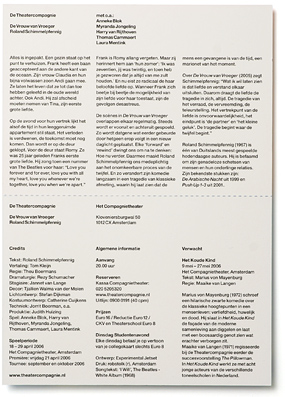 What we forgot to mention in our earlier posts, about the previous plays (Gilgamesj, The Pillowman, Driekoningenavond), is the fact that, for each play, we also had to design lots of last-moment advertisements, mostly for magazines, newspapers and websites.
Some examples of those announcements can be seen at DTC / Banners. On that page, we show a couple of banners that were used on various theatre-themed websites.

For the play, we also created some promotional pictures: photographs to be sent to newspapers, regional theatre halls, etc. We made these images in close cooperation with photographer Johannes Schwartz. In short, we created the typographic backgrounds, and the 'props', while Johannes snapped the actual photograph. More about the overall concept behind these photographs can be read here (go to DTC / Driekoningenavond and scroll down).
Shown below a couple of these photographs, part of a much larger series. Pictured are actors Anneke Blok and Harry van Rijthoven of De Theatercompagnie, holding placards:

Going through our archive, looking at the full set of photographs that Johannes Schwartz made for this particular play, we realized that, if all these photos were put on top of each other, you would get a moving picture: a little stop-motion movie, documenting the actual photoshoot. Shown below the tiny movie that you would get in that situation. (For all clarity: this movie was never used in the context of De Theatercompagnie; it is something we created for this website only, just for fun).

next: Ten Years of Posters

prev: Stuck On Me