Het Wijde Land (originally 'Das Weite Land', in English 'The Vast Domain', also adapted as 'Undiscovered Country') was a piece directed by Theu Boermans, and played by De Theatercompagnie between February 21 and April 26, 2007. The piece toured through the whole of the Netherlands, and landed in Amsterdam on March 18 and 19, 2007.
It's a piece written by Arthur Schnitzler in 1911, and revolves around themes typical for Schnitzler: the day-to-day worries of the Viennese bourgeoisie, hypocrisy and 'hollow' values.

As with the previous posters we designed for De Theatercompagnie (see for example DTC / Gilgamesj and DTC / De Vrouw van Vroeger), the whole concept behind the printed matter revolved around the idea of taking two quotes from the play, and dividing these quotes over two posters; two posters reacting to each other, almost like two actors engaged in a dialogue.

Reading the scrip of the play closely, we came across a fragment that in our view perfectly encapsulated the theme of the play. This paragraph also happened to carry the title of the play, so we considered it a key passage. The text goes as follows: "We proberen wel dingen in onszelf op orde te brengen, zo goed als het gaat, maar die orde is toch alleen maar iets kunstmatigs. Het natuurlijke is de chaos. De ziel is een wijd land..."
("We might try to put things in order for ourselves, as good as possible, but in the end that order is only artificial. The natural state is chaos. The soul is a vast domain...", quick translation by ourselves).

So we focused on two elements from this paragraph: "order is artificial", and "nature is chaos". We decided to use these two sentences for the posters, almost as slogans.
To emphasize the title the title of the play ('The Vast Domain') we added a landscape-like element by repeating (and gradually decreasing) the sentences, to suggest a horizon of some sort. To underline the idea of a landscape even more, we added a colour gradient running from black to green ( a simulation of a 'split fountain', in Dutch this effect is called an 'iris druk', not the be confused with the American 'iris print').
Shown below the two posters. On the left the A2 poster, on the right the A0 version: 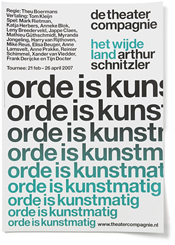 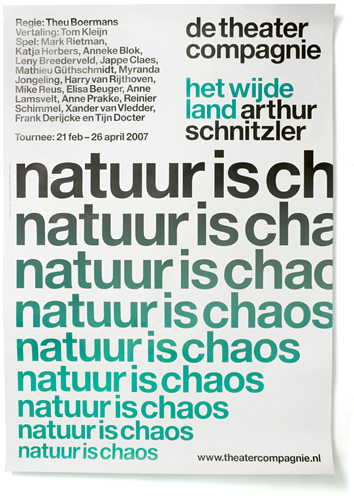 As with the previous plays (Gilgamesj, Driekoningenavond etc.), we were also asked to design a simple brochure. Basically, we made a double-sided A2 sheet, folded to an A5-sized booklet. Shown below are back and the front of the A5-sized booklet: 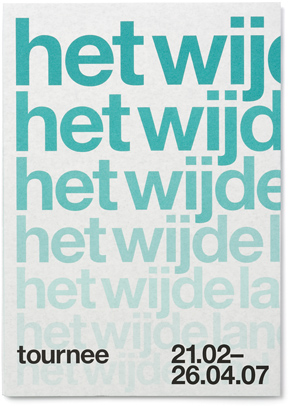 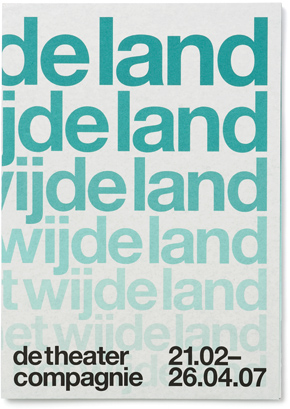 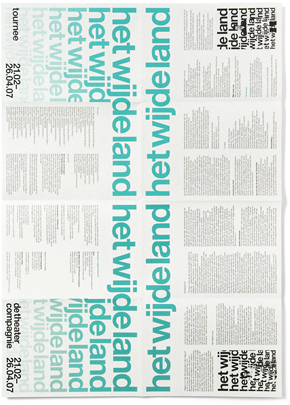 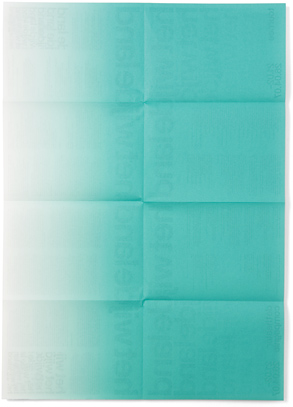 As you can see, we kept the poster-side of the brochure quite abstract: just a colour gradient, running from green to white, referring to the idea of a 'vast domain'.
In the brochure itself, we placed photographs of the actors, holding placards. These photos were part of a larger series of promotional images, a series we created in collaboration with photographer Johannes Schwartz. More about these photographs later.

Next to the poster/brochure, we were also asked to come up with a simple postcard, to be used as a hand-out flyer. We designed a double-sided A5-sized card, perforated in the middle to form two A6-sized cards.
On the card, we showed the two promotional photographs we also used in the brochure. We added a green colour field at the bottom, to refer again to the landscape-like title of the play.
Shown below the front and back of the card: 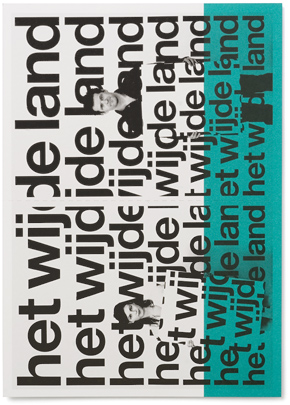 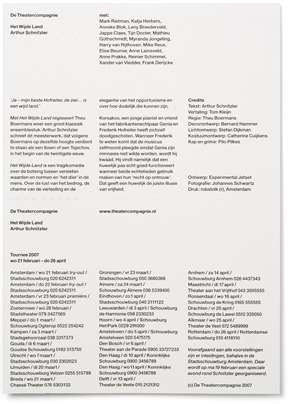 For Het Wijde Land, we also created some promotional pictures: photographs to be sent to newspapers, to be used in brochures, etc. We made these images in close cooperation with photographer Johannes Schwartz. In short, we created the typographic backgrounds, and the 'props', while Johannes snapped the actual photographs. More about the overall concept behind these photographs can be read here (go to DTC / Driekoningenavond and scroll down).
Shown below two of these photographs, part of a much larger series. Pictured are actors Katja Herbers and Mark Rietman, holding placards:

Going through our archive, looking at the full set of photographs that Johannes Schwartz made for this particular play, we realized that, if all these photos were put on top of each other, you would get a moving picture: a little stop-motion movie, documenting the actual photoshoot. Shown below the tiny movie that you would get in that situation. (For all clarity: this movie was never used in the context of De Theatercompagnie; it is something we created for this website only, just for fun).

As was the case with all of the other plays (Gilgamesj, The Pillowman, Driekoningenavond, etc.), for Het Wijde Land we also had to design lots of tiny last-moment advertisements (mostly for magazines, newspapers and websites). We won't show all these small adverts here, but some examples can be seen at DTC / Banners. On that page, we show a couple of banners that were used on various theatre-themed websites (such as www.moose.nl).

Apart from a website banner, we also designed, for Het Wijde Land, an actual banner. When the piece landed in Amsterdam, it was played at De Stadsschouwburg, a big theatre hall. For the front of this hall we designed a banner of 13,5 x 1,5 meter; a (mocked-up) photograph of this piece is shown below (unfortunately, we never managed to make a photo of the actual banner 'in situ'): 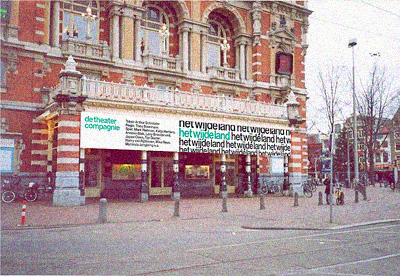