Het Koude Kind ('Das Kalte Kind', in English 'The Cold Child') was a theatre play that ran at Het Compagnietheater in Amsterdam from May 9 to June 1, 2006. The piece was written by Marius van Mayenburg, directed by Maaike van Langen and played by De Theatercompagnie.

As with the previous posters we designed for De Theatercompagnie (see for example DTC / Driekoningenavond and DTC / De Vrouw van Vroeger), the whole concept behind the printed matter revolved around the idea of taking two quotes from the play, and spreading these quotes over two posters; two posters reacting to each other, almost like two actors engaged in a dialogue.
But unlike the posters we designed previously for De Theatercompagnie, we didn't start by reading the play, simply because we weren't able to do so. In the case of Het Koude Kind, we had to create the promotional photographs BEFORE the actual text of the play was available to us. For all kinds of reasons we won't get into now, it is sometimes needed for promotional photographs to be distributed almost a full year before the play actually premiers. In other words, we had to have the photographs ready before we even knew what the play was about.

The only thing we knew about the play was the fact that there would be many actors involved. So thinking about how to photograph a bunch of actors, we decided to go for a sort of 'Usual Suspects'-style pick-up line. We envisioned a row of actors, standing in front of a wall with measuring lines. So, together with photographer Johannes Schwartz, we came up with this picture: 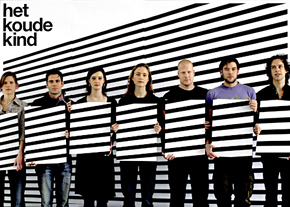 Going through our archive, looking at the full set of photographs that Johannes Schwartz made for this particular play, we realized that, if all these photos were put on top of each other, you would get a moving picture: a little stop-motion movie, documenting the actual photoshoot. Shown below the tiny movie that you would get in that situation. (For all clarity: this movie was never used in the context of De Theatercompagnie; it is something we created for this website only, just for fun)

The (typo-)graphic background and the placards were designed by us, while the actual picture was snapped by Johannes (and to read more about the overall concept behind the series of promotional photographs as a whole, please go to DTC / Driekoningenavond and scroll to the bottom).

After the text of the play was made available to us, we finally had the chance to actually read it. We asked ourselves how to come up with two typographic posters referring to both the actual text of the play, and to the promotional photograph that we had already made months earlier.
We decided to use the horizontal lines to cross out text. We figured that would be the most natural way to let the horizontal black bars function in a typographic way. But which text should be crossed out? What sort of text should never be visible on a theatre poster?

That's when we started thinking about 'spoilers'. A 'spoiler' is a bit of information that discloses details of the plot of a movie, thus spoiling the enjoyment of the viewer. So that was the idea behind the posters: to give away information from the play that should have been kept secret. And then to cross out this information, to make the posters safe again.
After reading the play, we figured that one possible spoiler was the fact that the cold child, the child referred to in the title of the play, is in fact a doll. So we used a dialogue from the play that expressed this child/doll confusion. "Speel je graag met poppen? Dat is geen pop, dat is ons kind!" ("Do you enjoy playing with dolls? That isn't a doll, that's our child!"). We divided this quote over two posters, and then crossed out the text with black horizontal lines, to make it unreadable. Shown below the two posters. First the A0 poster, then the A2 version: 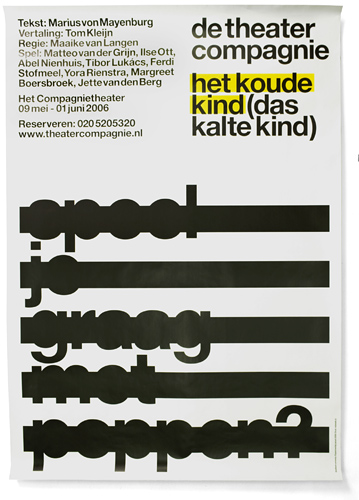 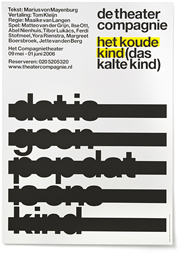 We chose yellow as a second colour, and used it to emphasize the title. In a way, we wanted to refer to 'highlight markers', those felt-tip pens ('Stabilo Boss'-type markers) that are used to highlight text. We thought it was interesting to let the horizontal lines function in two different ways: while the black lines are crossing out words, the yellow lines are highlighting words.

Anyway. A photograph of one of the posters hanging in the streets of Amsterdam can be seen here: 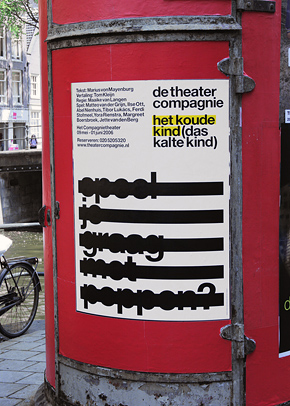 As with the previous play (De Vrouw van Vroeger) there was not really enough budget to print a proper brochure, so instead we were asked to come up with a simple flyer. We designed a A5-sized piece of cardboard, with a perforation in the middle to form two A6-sized postcards. Shown below the card, front and back: 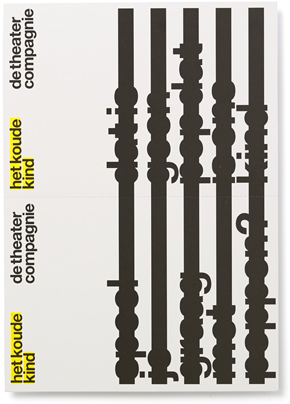 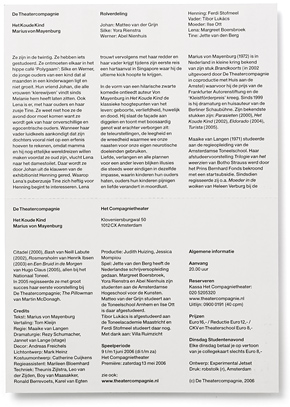 As was the case with each other play (Gilgamesj, The Pillowman, Driekoningenavond, etc.), for Het Koude Kind we also had to design lots of small last-moment advertisements (mostly for magazines, newspapers and websites). We won't show all these small adverts here, but some examples can be seen at DTC / Banners. On that page, we show a couple of banners that were used on various theatre-themed websites.

next: Stuck On Me